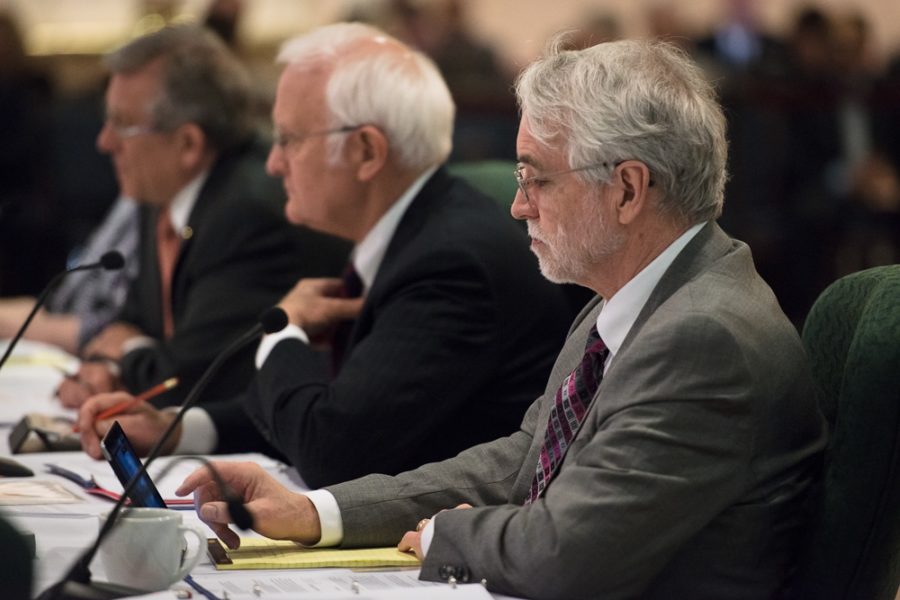 President-elect Timothy L. Killeen takes notes during the board of trustees meeting at the Illini Union on March 12, 2015.

New professors who begin teaching classes in August will work until September without having their appointments approved by the Board of Trustees.

For some, such as Steven Salaita whose controversial appointment was denied, this can create a lack of job security leading into the academic year.

While the board must ultimately approve new hiring policies and procedures, the Academic Senate unanimously approved the policy May 2.

The procedures encourage the board to delegate the approvals for tenure and non-tenure track academic appointments to each campus’ chancellor. The committee reaffirmed that the board should approve all appointments at the dean-level and higher.

The recommendations come from a committee that examined the policies after forming in October 2014 at the request of Former Provost Ilesanmi Adesida and Former Senate Executive Committee Chair Roy Campbell. A final report was issued in December 2014.

The committee formed after the rejected appointment of Salaita, who was offered a position as a tenure professor in the American Indian Studies department for the 2014-2015 school year. On Aug. 1, 2014, Former Chancellor Phyllis Wise stated she would not forward his appointment to the board for approval, citing his recent tweets regarding conflict in Gaza. The Salaita case was resolved in $875,000 settlement, following 14 months of protests.

Emails released later showed Wise was under pressure from donors and other stakeholders to rescind his offer. By the time Salaita’s job was rescinded, he had already left his previous job and began preparations to move to Urbana.

The board typically meets every two months, so the time between a concluded search and when the board may meet could be weeks and months, said Bill Maher, chair of the committee on University Statutes and Senate Procedures.

“It has meant that we have people here who were hired to start working and are expected to start meeting with class and doing work, who haven’t had their appointments formally approved by the board, so there was this gap in timing,” Maher said.

The decision sparked protest throughout the campus and globally. The American Association of University Professors placed the University on its censure list. The organization’s members will vote again in July on whether to take the University off the list.