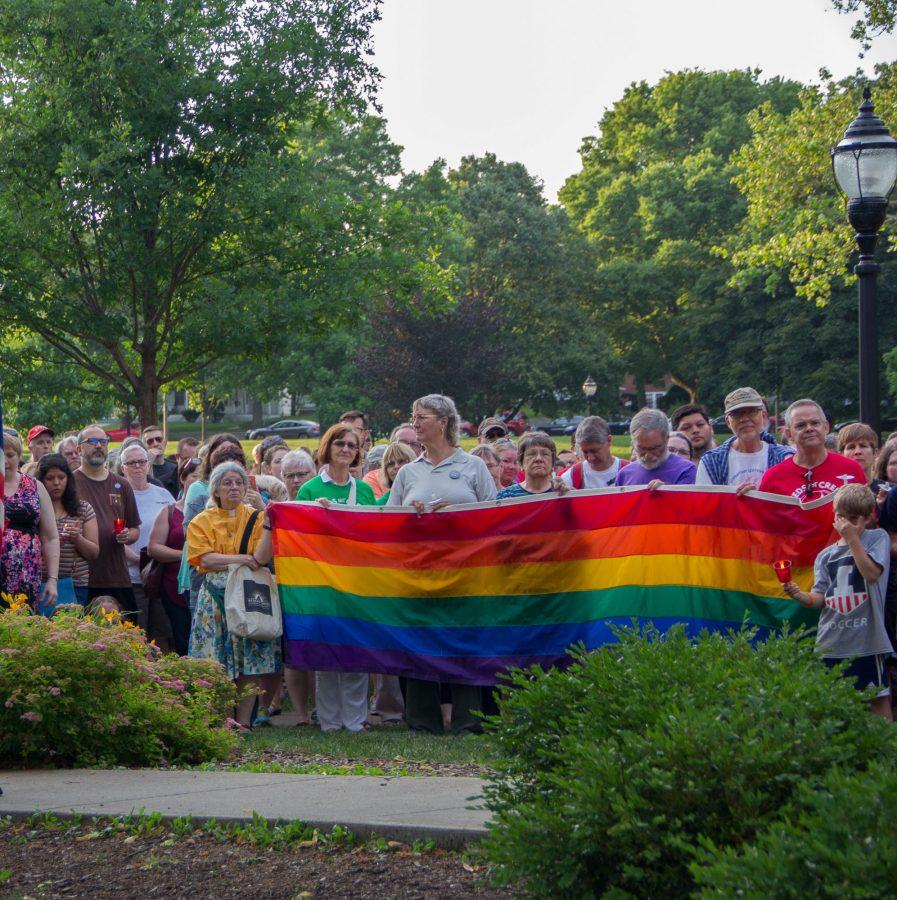 Community members listen speakers and gather for support at the Vigil for Orlando at the West Side Park in Champaign on Tuesday, June 14, 2016.

Standing in West Side Park on a warm summer evening, Heidi Weatherford, pastor at McKinley Presbyterian Church in Champaign, led a crowd gathered to honor and remember those who were killed or injured in the Pulse nightclub attack in Orlando in song. “We are gentle angry people,” she sang. “And we are singing, singing for our lives.” The song continued with verses that said, “We are queer and straight together,” and “We all come from many nations.”

A vigil was held Tuesday in West Side Park – the worst mass shooting on U.S. soil. The event was organized by Leslie Morrow, director of the UIUC LGBT Resource Center, Matthew Gladney, a member of the Champaign City Council, and Stephanie Skora, President of the UP Center of Champaign County.

Morrow opened the vigil by reading the names of the victims in the attack.

“We are here tonight with heavy hearts to be in solidarity with Orlando and these communities around the world,” she said.

The message of the speakers was to express shock and confusion at the attack, but to respond with peace and love, not more hate.

“Why can’t we all live in peace and harmony,” Sawadogo said. “We in the Muslim community along with the rest of you are still searching for answers.”

Robberts-Mosser extended an apology to the LGBT community for the ways in which the Christian right has purported violence against them.

“Hate is not Gospel,” she said. “Jesus Christ was murdered for standing with marginalized people, and he was crucified all over again at Pulse Sunday morning.”

Gladney used his speech to speak to the love in the LGBT community.

“I don’t want this event to make us fearful or angry,” he said. “I don’t want us to lose the love in our hearts.”

“When we don’t speak up as often as we can, things like this happen,” Skora said. “I think this event popped a very carefully constructed bubble many of us had built.”

Tanya Diaz-Kozlowski closed the vigil with her speech, in which she implored the crowd to take action for those who could not, saying she asked herself the question, what we do now, those of us who did not die?