Interim dean begins evaluating the future of the College of Media

Interim Dean Wojtek Chodzko-Zajko is starting the evaluation process of the College of Media. 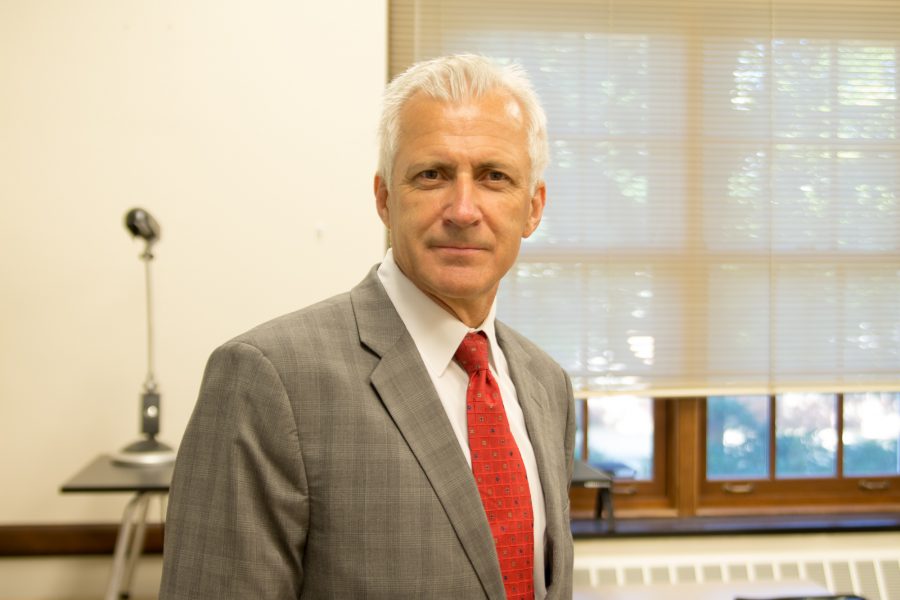 New Interim Dean for the College of Media, Professor Wojtek Chodzko-Zajko, stands in his office on June 5, 2016.

Professor of Journalism Brant Houston has seen the College of Media fluctuate and grow with the digitization of his field. Committees have been discussing questions about the future of the college almost since its inception: Should the advertising department be moved to the College of Business? Is the discipline of media and cinema studies better suited to the College of Fine and Applied Arts?

“There have been discussions almost consistently since I’ve been here in 2007, when the College of Media was a new college,” Houston said. “The college has been asked to define “exactly what its role as the College of Media is, (and) what’s the best job we could be doing.”

These committees have raised questions about Media’s cohesion and fueled rumors of its possible absorption into other colleges. With the arrival of Interim Dean Wojtek Chodzko-Zajko, the college will once again undergo evaluation.

Over the course of this semester Chodzko-Zajko will evaluate the college’s resources, opportunities and personnel. He will then give his findings, along with recommendations for the college’s future, in the form of a report called a white paper, to Associate Provost Bill Bernhard.

“I think what we’re looking for right now is a relatively short-term strategy so that we can continue to have the best possible undergraduate and graduate programs in all of the areas within the college,” Chodzko-Zajko said. “As well as to support the important work of Illinois Public Media and its radio, television and internet elements.”

Chodzko-Zajko will speak with the faculty, staff, students and alumni in order to gauge what future will be best for all stakeholders. He believes the college’s structure may change, but he doesn’t think any weight should be placed on its rumored absorption into another college.

“It’s hard for me to speculate why rumors happen, but in this case the rumors are not based on any substantiated facts,” he said. “While it is possible that there will be a different organizational structure, nothing has been decided, and it’s equally possible that the College of Media will continue in the same organizational format.”

With new technological advancements in the world of media, Bernhard sees this evaluation as an opportunity for the college to redefine itself. However, he doesn’t think that these changing times should provoke feelings of job insecurity among faculty.

“Thinking about all of these things, I think that creates a sense of a little bit of uncertainty and that can make people nervous,” he said. “I certainly think that we’re committed to — when we move ahead — doing so in a way that protects the people here and ensures whatever organization comes out the other side represents the configuration and expertise of the people we have here.”

Houston has said previous evaluations have led to the college’s overall improvement, and he thinks this one will be no different.

“It’s to no one’s benefit to come up with something that doesn’t work,” he said. “It’s to all our benefits to work together and come up with the best plan possible.”

Chodzko-Zajko will hold an assembly with the faculty and staff of the college on Sept.1 in order to understand how they think about the future.

“I’m going to encourage them to be forward thinking, to think about the future and to think positively about everything we need to do to make our programs even better than they are right now,” he said.