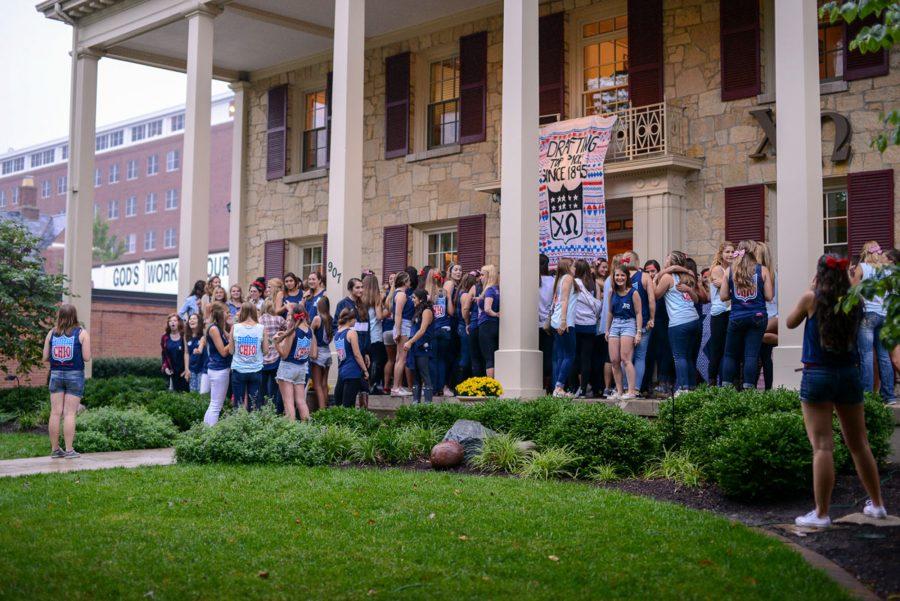 Sisters, joined by pledges, sing their songs on the front porch during Bid Day on Monday, Sept. 15, 2014.

“The fraternity and sorority community at the University of Illinois is continuing to grow, and we are confident that Phi Mu will add another strong organization to the already successful system,” wrote April Roberts, Director of Extension at Phi Mu who oversees the establishment of all of the sorority’s new chapters around the United States.

After Bid Day, Phi Mu will begin their own separate recruitment process lasting about two weeks. During this time, Phi Mu will host recruitment events and hold personal interviews with all potential new members who are interested.

Since this is their first year back and Phi Mu has no University members, their recruitment is conducted by Phi Mu National Headquarters staff and Chapter Consultants.

Kappa Delta will be moving from Urbana to Chi Psi fraternity’s current house at 110 E. Armory Ave. in Champaign after occupying the Urbana location for 92 years.

Adrian McLaughlin, President of the Sigma Omicron Chapter of Kappa Delta and junior in advertising, wrote by email that the women will miss the old house because it has a lot of character with an open courtyard, stained glass and big green doors. Kappa Delta plans to incorporate some of these characteristics in the new location.

“All together this whole process has been going on for several years, looking at new locations until we could find the perfect one,” McLaughlin said. “But I know all of the hard work is going to pay off when our members get to move into a brand new house and make amazing memories in it in 2018.”

Phi Kappa Tau returned to campus this year and owns Theta Chi’s old house, which prompted Theta Chi to search for a new house after occupying that location since 2009.

Theta Chi moved from their house in Champaign to a new location at 303 E. John St., which housed Sigma Kappa until they left campus in May.

Jacob Hacm, President of Theta Chi and junior in mechanical engineering, said the new location is a positive change for active members.

“The new location is perfect, honestly,” Hacm said. “It’s closer to Green Street, restaurants, bars and classes, so everyone loves it.”

The new location is better for potential new members as well, Hacm said. “People aren’t turned away from the run-down house we used to have.”

All three chapters expressed their eagerness to begin a new year on campus.