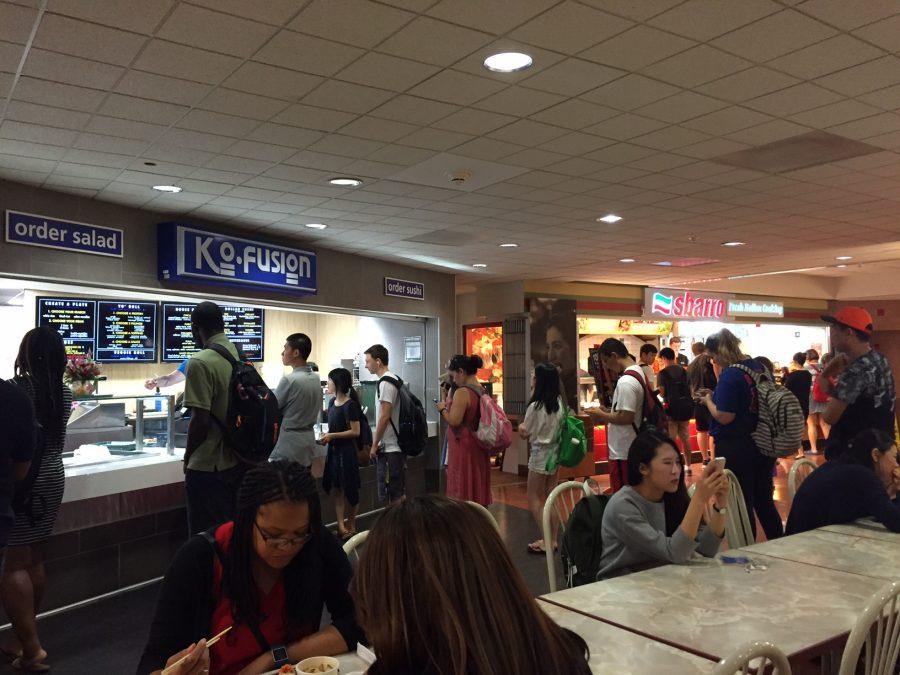 Customers wait in line at the new Kofusion in the Illini Union basement.

Short breaks between classes around lunchtime can make it difficult for students to grab a bite to eat. The Illini Union is a good place on campus to go, considering it is the only building on the Main Quad with restaurants.

But with only five restaurants in the basement, it can be hard to have enough time to get in and out during the lunch rush hour between 12 and one.

The Union also has tables for people to eat at even if they bring a lunch from home or just want a place to do homework. It also provides microwaves for students to heat up food and vending machines for a quick and easy grab’n’go option.

At 12:30, all lines but for Qdoba Mexican Grill had two or less people in them. But most of the tables were full even though not all people at the tables were eating food from Union restaurants.

Even the line to use the microwave was about a 10 minute wait at noon.

The restaurants in the basement are Wendy’s, Sbarro, Kofusion, Qdoba Mexican Grill and Einstein Bros. Bagels. In order to make the most of the only restaurants on the Main Quad, here’s a breakdown of which restaurants were busy and when during Monday’s lunch rush.

“Delicious and modern sushi is now in the heart of campus! KoFusion brings the flair and excitement of its Downtown Champaign and Urbana Campus locations to the convenient Illini Union Food Court. Pick from its famous dollar sushi rolls, build your own salad, or create a combo. Signature House Rolls are available to order, too,” according to the Illini Union Dining website.

For example, the line for hot food had an average of five minutes but took as long as 10 minutes. The Sushi line ultimately averaged out to about 10 minutes but for customers getting in line around noon or 12:10 it took more than 20 minutes for them to get their food.

The longest line at Kofusion was 20 people from around noon to 12:30.

At one, there were 12 people in line.

Overall, the Qdoba line was the longest throughout the lunch rush. At one point the line was 35 people long. Even though the line had the most people, it wasn’t necessarily the longest wait time. It took as short as nine minutes and as long as 20 minutes to get served.

At one, Qdoba still had 10 people in line.

“From their famous juicy burgers to the tasty chicken, Wendy’s is no doubt a classic staple on the dining scene. Choose from four delicious salads, or order the savory chili,” it said on the Illini Union Dining website.

Wendy’s was the second busiest restaurant during the lunch hour. The line got as long as 26 people, but even so the wait to be served was shorter than some other restaurants, and by 12:20 Wendy’s only had five people in line to order.

But then at one, Wendy’s had a second rush with 22 people in line. 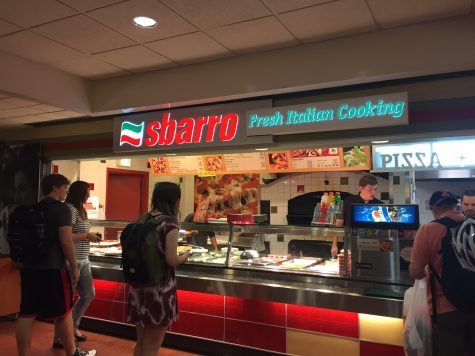 “Pizza so delish, you will dream about it. Get it by the slice or as a whole pie, ‘cuz Sbarro does it all. Want a break from pizza? Try one of the pasta dishes or order a calzone,” it said on the Illini Union Dining website.

The line for Sbarro averaged about six minutes. The longest line was 10 people at around 12:10 and the wait time took as long as 12 minutes.

But by 12:25 p.m. the line for Sbarro took about three minutes. And just five minutes later it took one customer less than one minute to order and pay.

At one, the line picked up slightly and there were six customers in line.

“Bagels have never been so versatile! Dine on everything from turkey wraps to bagel dogs to egg sandwiches,” it said on the Illini Union Dining website.

Einstein Bagels consistently had the shortest line. At noon, the line was about seven minutes long but the rest of the hour the line was usually under five minutes. At a couple points throughout the hour, there was no one in line or only one person being helped at the counter.

Einstein traffic picked up with 10 people in line at one.

Of the five restaurants in the basement, if you are looking for the quickest option then Einstein Bagels and Sbarro are your best bet. If you don’t mind waiting a little longer, then most places in the Union basement should provide you with a solid meal and leave you ample time to get to your next class.