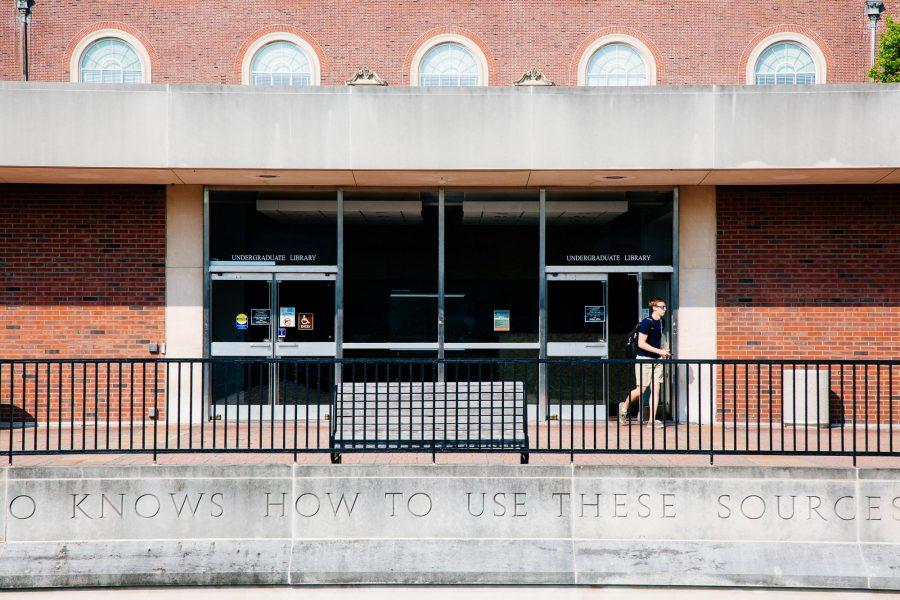 A student opens the Undergraduate Library doors on Monday.

Students studying on campus will have a much easier time getting into the Undergraduate Library. After 47 years of use, the UGL doors are being replaced.

Construction on the building began on May 16 and should be completed this week, said Assistant Dean of Libraries for Facilities Jeff Schrader.

The library had received complaints from students that its original doors  were difficult to open. Ward said that these new doors will be easier for student use and maintenance.

“After 45 years of heavy traffic, the door hinges are worn beyond repair and replacement parts are no longer available,” Schrader said. “The new windows and doors will conserve energy with new energy thermal glazing, improve life safety egress and reduce the campus deferred maintenance backlog.”

In accordance with other changes at the library, students planning to pull all-night study marathons at the Undergraduate Library might be shocked to see a major blow to their caffeine supply.

The UGL’s Espresso Royale, and the adjacent tunnel to the Main Library are undertaking renovations to make them resemble a “more homey cafe,” said Reference Services Librarian David Ward. The renovations in Espresso Royale will also insulate the space so it can stay warm in the winter months, Ward said.

Ward believes the lack of coffee and the closed-off tunnel space will decrease library traffic during the renovations.

“The biggest one (inconvenience) is probably lack of coffee,” he said. “Having a coffee shop here has been very popular, obviously it helps with studying, particularly late at night. Since we’re a library that will soon be open 24 hours that was a big feature there.”

However, Ward said he’s certain the new coffee space and improved doors will increase traffic and student satisfaction once complete.