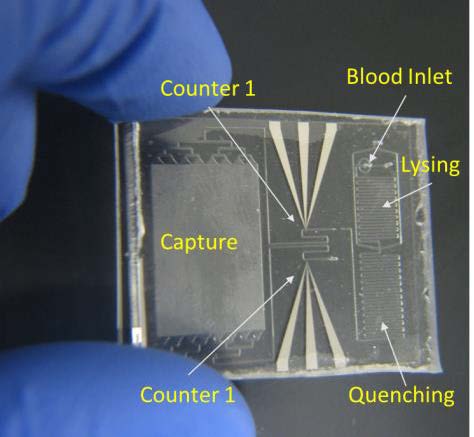 The disposable chip is low-cost and can analyze a drop of blood without any preparation.

Teams of undergraduate engineering students from universities all across the country competed in the National Institutes of Health’s (NIH) Design by Biomedical Undergraduate Teams Challenge (DEBUT), with the University of Illinois’s team claiming second place.

The University’s team earned the $15,000 award by developing a disposable and cheap chip that has the ability to detect biological markers of sepsis.

Early detection is vital for sepsis since survival rates decrease each hour after a person contracts it. The microfluidic device analyzes the stage of sepsis from a singular drop of blood instantaneously, with the help of a controller and mobile app.

The device possesses greater specificity and sensitivity than other devices currently available.

Zynep Erim, manager of the DEBUT competition, said in a prepared statement, “(The device) is a new way to more easily and effectively diagnosis sepsis (and) could potentially save millions of lives.”

The DEBUT Challenge was sponsored by the NIH’s National Institute of Biomedical Imaging and Bioengineering (NIBIB). The

NIBIB’s criteria for the winners was based off of the teams’ innovation of design, impact, existence of a working a prototype and the significance of the problem the prototype is addressing.

The Illinois team, along with the five other schools making up the top six winners, will be honored at the annual Biomedical Engineering Society Conference in Minneapolis on Oct. 7.

Head of the Bio-Engineering Department Rashid Bashir, said that the student team worked in his research group and lab.

“I am very excited about the possibilities to address this grand challenge of sepsis and this is a big focus of research in my group,” Bashir said.

Bashir said that the student group has been working for about a year, and they will continue to do research in this subject very actively, working with Carle Hospital and OSF Saint Francis Medical Center.