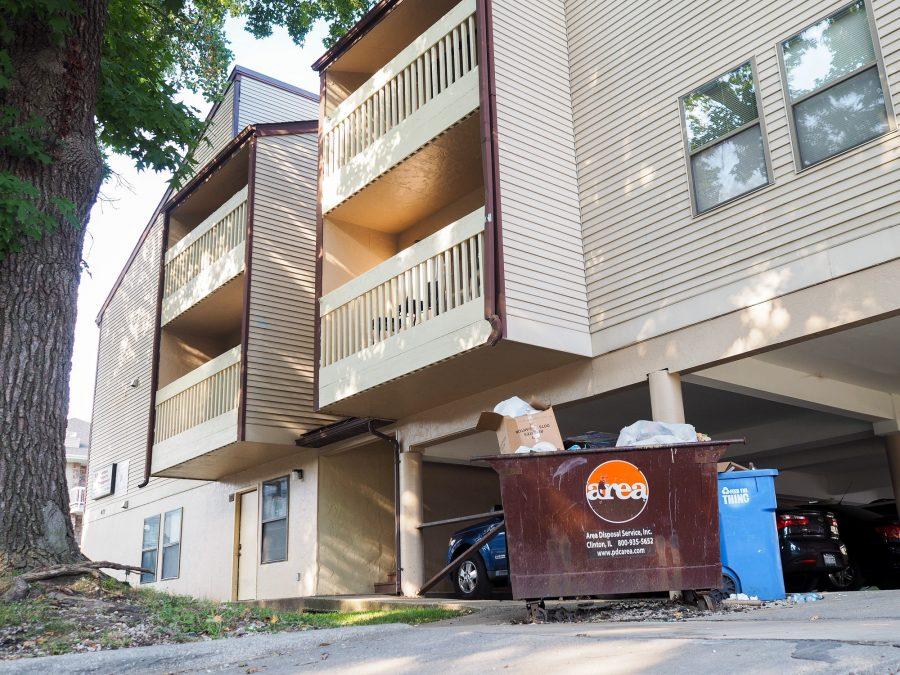 The exterior of a Campus Property Management apartment on Sunday, September 5, 2016.

Like many other excited sophomores, Alexis Vasquez, in FAA, arrived in Champaign-Urbana on Aug. 19 eager to begin the year.

However, when she entered her apartment bedroom she realized something major was missing.

“I was a little freaked out,” she said. “Because I knew it was supposed to come furnished.”

Aside from a desk and chair, her room contained no furniture. The room lacked major necessities like a bed and dresser. After calling the building’s owners, Campus Property Management, she eventually received a bed that evening.

But she and her three roommates discovered other issues with their apartment as the days went by. Broken hinges and cabinets, moldy tables, a leaky bathroom and a microwave with a hole that caused food to catch on fire all cast a shadow on her daily life on campus.

Michael Jay, director of public relations and communications at CPM, said the company occasionally fails to put in new furniture in apartments whose previous residents provided their own.

“All I can say is I wouldn’t be truthful if I said we didn’t have some teething problems,” Jay said. “We had 600 to 800 apartments (where) people were moving in over two days. In that interim period we had checked the apartments, cleaned them, replaced furniture as we could, and we couldn’t get to everything before move-in.”

Although Jay couldn’t say exactly how many apartments had these issues, he believes this year’s move-in was “as good, if not better in some respects” than that of previous years.

Vasquez was pleased with the speediness of her bed delivery, but she still lacks a dresser and is forced to put all her clothing on her bed as a makeshift replacement. The moldy tables were removed, but not replaced, and the four-bedroom apartment now has a new microwave.

However, other issues still remain. Vasquez and her roommates have been routinely calling CPM to check on the status of their furniture. However, they have received vague responses.

“‘We’re all constantly being told the same answer, ‘You’re on the list, you’ll be getting help soon.’ They don’t really give us the date and time, just ‘soon,’” Vasquez said. “We have to be home waiting for them to show up, but we never know when it’s going to happen.”

All students can contact the Tenant Union if they have problems with their living situation. The Tenant Union staff work with the student and property company to come up with a solution.

“Complaints are about how the landlord handles problems when they arise,” according to the Tenant Union’s website. “A valid complaint is one related to the landlord’s obligations under the law or under the terms of the lease.”

Vasquez and her roommates have decided to weather out the issues rather than confront CPM with legal action.

“I know my roommates have always joked around about that. We’ve at least considered it,” Vasquez said. “We’ve been very frustrated, but I don’t think any of us are the confrontational type.”

Vasquez believes this constant reliance on her roommates has brought the them closer together. Sharing a space together has affected all of them. They are closer together than they were last year, she said.

“Every now and again when I was off at class, my roommates would call for my dresser, and they’d like to know what’s going on with that. We all take turns,” Vasquez said.

In the meantime, CPM has continued their efforts to help Vasquez and other frustrated students like her. Jay said there are three trucks working all day with the single goal of fixing apartment mishaps and missing furniture.

“There are some things that slip through the cracks,” Jay said. “But it is our responsibility to turn those around as quickly as possible.”