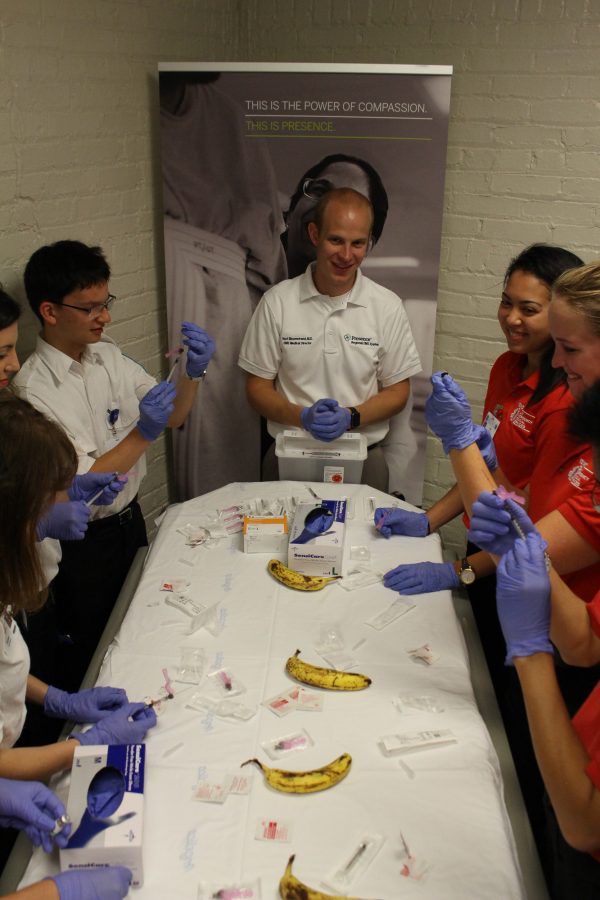 Anaphylactic shock is a life-threatening potential side effect of a severe allergic reaction. Time is of the essence and quick medical action is vital for survival.

However, a University medical organization is actively working to combat this deadly side effect on campus.

IEMS is a student-led Emergency Medical Technician, or EMT, organization. The club consists of over 150 members who provide services for over 250 events that can happen throughout the year on campus.

The student volunteers underwent training from Regional EMS Medical Director Kurt Bloomstrand at the Memorial Stadium First Aid Room. According to his lecture presentation to the students, approximately 1,000 Americans die each year from severe allergic reactions.

Bloomstrand demonstrated how to measure the proper dosage into the syringes and correctly deploy epinephrine into a person’s system on a banana. The student volunteers then tried their hand at practicing the procedure.

The EpiPen, a disposable pre-filled device, is typically used in an emergency to treat severe allergic reactions by injecting epinephrine into a person’s system. By relaxing the airway muscles, the drug eases breathing while waiting for an emergency response vehicle.

But the rising prices have made this crucial resource inaccessible for some people.

“This is life-saving medicine,” said Chapin Rose, Illinois Senate representative. “And to think about the fact that it’s costing $2,400 (per year) versus $50 is ridiculous, it’s a waste of taxpayer money.”

Elizabeth Woodburn, junior in Engineering, first got involved when she took the class offered by IEMS in the spring of 2016.

“You go through so much training and so many scenarios,” Woodburn said. “You (learn how to) have a calm demeanor and figure out what to do.”

Alex Fahey, junior in MCB, initially got involved when she saw IEMS set up on Quad Day.

“I got licensed (through IEMS) and I’m able to help. (In a public event) we never know what to expect,” said Fahey.

Fahey said she met many of her best friends through IEMS.

Senator Rose was amused to learn that Illinois, his alma mater, would be the first in the state to receive the go-ahead to start training. As a former EMT himself, Rose- cares that these resources are available to everyone.

“Making sure to keep this medicine on the streets, in a cost-effective way for taxpayers, will save someone’s life,” said Rose. “At the end of the day, these are the kind of things government should be doing.”