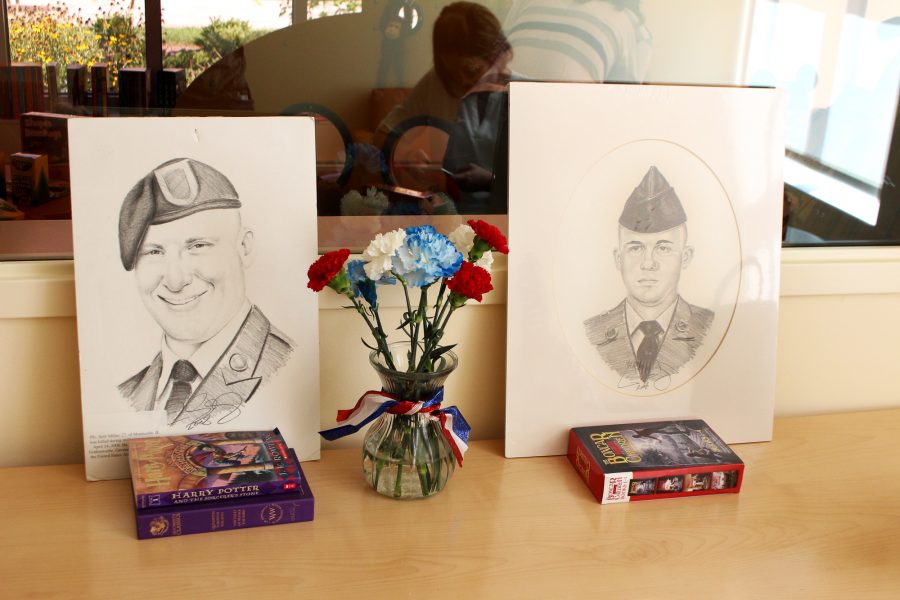 Portraits of Seth Miller and Lucas V. Starcevich sit outside the children’s library dedicated to them.

A year after Sept. 11, 2001, Jason Sakowski shipped off to Iraq. A year later he was in Afghanistan and a year after that he returned to Iraq.

The global war on terrorism is a very real part of Sakowski’s life, but he doesn’t believe every other American understands its importance.

Now Sakowski, the current coordinator for Veteran Student Support Services at The Chez Family Foundation Center for Wounded Veterans in Higher Education, is using his position to ensure the University recognizes the sacrifices of fallen soldiers.

“After 2001 or the invasion of Iraq in 2003, it was the every day news, but over the years it just kind of died down,” Sakowski said. “A lot of people don’t realize that we have troops deployed to poor countries in harm’s way on a daily basis. We take for granted being able to be … in the comfort of our own homes.”

Last spring, Sakowski requested for the Portrait of a Soldier exhibit to visit the University to commemorate the events of Sept. 11. “Portrait of a Soldier” is a project started by Illinois artist Cameron Schilling to create pencil sketches of every man or woman from Illinois who died while serving in the war on terror. As of 2010, there are 124 portraits.

The portraits arrived on campus Sept. 8, and they are currently on display in the Center for Wounded Veterans and the Armory. The portraits will remain on campus until Sept. 13.

“Every family, after their soldier passed, would receive [the portrait] either personally handed …. or in the mail, ” she said. Henderson recieved hers personally from Schilling.

Ava Thompson, whose son Private First Class Lucas Starcevich, 25, died on April 16, 2007, in Baghdad, believes the portraits are a positive way to honor her son, but struggles with their presence.

“[The portraits are] bittersweet, it’s nice that he’s honored in the portrait,” Thompson said. “It’s tough looking at the portrait of a child because he’s gone, because I’d rather have him with me.”

Both of their sons joined the military due in large part to the terrorist attacks on Sept. 11. Although Henderson and Thompson wish their sons could return, they acknowledge how proud they are that their sons died for something they believe in.

“My son and Ava’s son, they both had some pretty hellacious times in their life, and when they joined the military they cleaned themselves up, they got it together, it gave them a purpose,” Henderson said. “You know it sucks to lose your kid, but if you’re going to lose your kid you lose your kid with them doing something they love to do, and both of us had that happen.”

Sakowski believes these portraits should have a positive effect on the family members of fallen veterans and could be a source of pride for the state of Illinois.

“I think it would carry a lot to know that your son or daughter lives on through these portraits traveling throughout the state,” Sakowski said.

And even though a decade and a half has passed since the terrorist attacks, it’s important for students to reflect on that time in order to understand how much of the world has altered, he said.

“It changed the course of a lot of people’s lives,” he said. “Just having those portraits and the faces here on campus is kind of like, ‘Hey, this happened,’ kind of like to honor them and just remember this happened.”