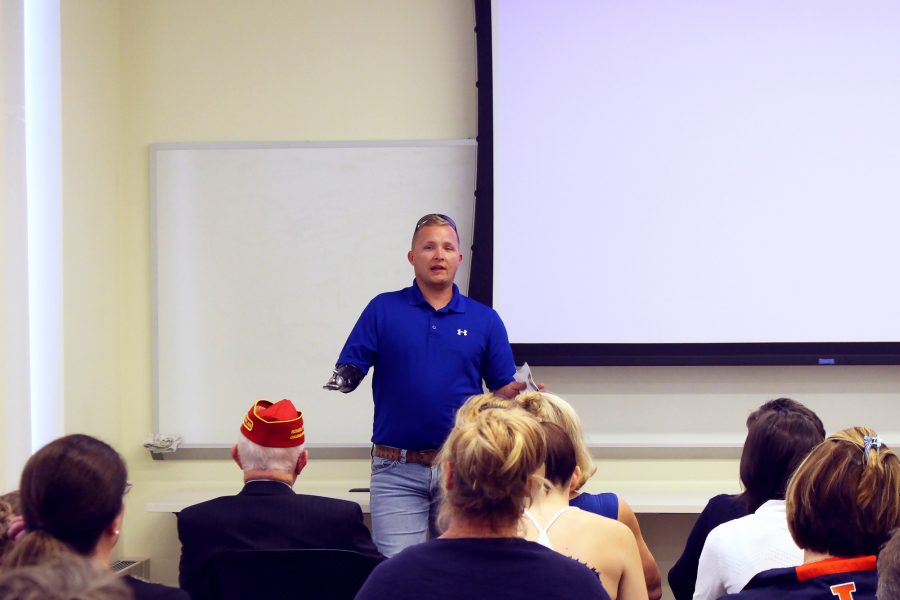 Veteran staff member Garrett Anderson speaks about the purpose of the Center for Wounded Veterans at the Children’s Library dedication ceremony.

There are 315 student veterans on campus, many of whom have their own family responsibilities in addition to academic pressures.

Supporting wounded veterans and their families has been the goal of The Chez Family Foundation Center for Wounded Veterans in Higher Education since it opened in the fall of 2015.

Now, with the addition of the Star-Miller Children’s Library, the center will continue to serve veterans by giving their children a place to play.

“I have a lot of students coming in who do have children, and when they are receiving services at the center, this way the children can use the playroom and also have books and toys to play with,” Coordinator of Clinical Programs at the Center for Wounded Veterans Dr. Katie York said.

The Star-Miller Children’s Library began as a joint effort by Joy Henderson and Ava Thompson, whose sons Pfc. Seth Miller and Pfc. Lucas Starcevich both died while serving in the Global War on Terrorism, to honor their sons’ memories in a positive way.

Henderson said the process for the Children’s Library began when she and Thompson decided to put some books aside for the visiting children of veterans.

The center supported their efforts, so they began to fundraise for more reading material.

“When you have an idea, you’ve got a picture in your mind of how you want it to go, and then when it super exceeds what you expected, it’s something beyond amazing,” Henderson said.

Through the efforts of York, Henderson and Thompson, the center now has a playroom complete with a one-way mirror so parents can observe their children playing while they go through counseling sessions.

The dedication ceremony was held on Sept. 11. Thompson believes this children’s library is a positive way to commemorate her son.

The library will help children who suffer from the strain of their parent’s deployment, wounds or post-traumatic stress disorder.

“When you lose a child it’s tough, and you look for ways to keep them alive in positive ways,” she said. “We want our sons to live on in a meaningful way.”