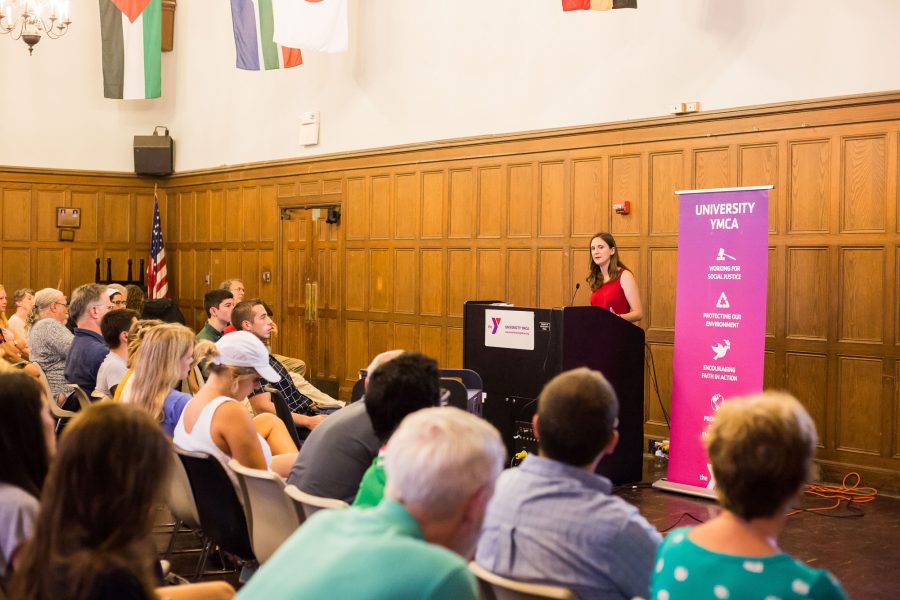 Jennifer Walling, executive director of IL Environmental Council, gives a talk about the Politics of Climate Change in Illinois at the University YMCA on September 16, 2016.

Despite the fact that Jennifer Walling’s job is to advocate for climate change legislation, she asks people to be compassionate with climate change deniers.

As the executive director of the Illinois environmental council, she encourages people to try and find areas of agreement with the opposition.

“The Politics of Climate Change” by Walling is the most recent lecture of the YMCA’s Friday Forum series. The theme of this year’s talks is entitled “On the Issues: Analyzing the 2016 Elections.”

Walling spoke about legislation she’s lobbying for in Springfield, as well as ways to build state legislature bipartisanship on climate change issues.

“We should be getting to a point where this is out there, this is happening and we need to resolve this issue,” Walling said.

While politicians remain divided and climate change is presented in varying ways, Walling believes the majority of citizens are on the same side of the issue.

However, she said there are partisan divides in the Illinois Senate. Walling argues the best way to pass the Illinois Clean Jobs Bill is to appeal to republican legislators’ interest in job growth.

According to her, it’s best to understand the interests of the opposition and how the side-benefits of the bill will complement their beliefs.

Walling said the Clean Jobs Bill currently has bipartisan support with 60 co-sponsors, but she’s nervous other lobbying groups will stop the bill from passing. Exelon, an energy company, and ComEd, an Exelon subsidiary, are trying to seek subsidies that contradict the Clean Jobs Bill’s goals.

“The test for whatever energy package we put together is going to be how much it prioritizes renewable energy and energy efficiency,” she said.

The Clean Jobs Bill proposes to increase renewable energy up to 35 percent by 2030, cap carbon emissions and invest in renewable and efficient jobs, Walling said.

“Jennifer Walling is an incredibly committed individual who is a professional at the state house and a committed advocate for environmental issues at the state house,” said Emily Cross, director of development at the University YMCA and a past SECS president.

Joe Edwards, senior in ACES and LAS, co-president of Students for Environmental Concerns, SEC, was enticed to see Walling, a University alumnus and former president of the group.

SECS is one of the oldest and largest RSOs for environmental advocacy on campus.

“It was important to be concerned about environmental issues and clean jobs a decade ago,” Edwards said. But now, “we’re almost past the point where we can turn around – at this point, it’s just mitigating.”

Edwards said he’s never met anyone who believed climate change was a myth, but he agrees with Walling that more people should take the subject seriously.

“Everybody has some kind of understanding and acceptance of it,” he said. “But a lot of it just depends on how they’re willing to go to change their habits and change their day-to-day life and what they do.”

Edwards believes that although it’s important to pass legislation, real environmental change will only come from ordinary people changing their habits.

“We can make these policies and try to enforce them, but at the end of the day those are only going to effect big level things, and a lot of the stuff that gets driven is on the small level,” he said. “If anything is going to change, people need to change it.”

60 percent of Illinois residents claim climate change is an important issue, Walling said during her lecture. Champaign County ranks second in the state of climate change belief among residents.

The next “On Issues” speech will be John Gruber’s “On Gun Violence Protection” Friday, Sept. 23 at noon. SECS meets at the YMCA every Wed. at 6:30 pm.