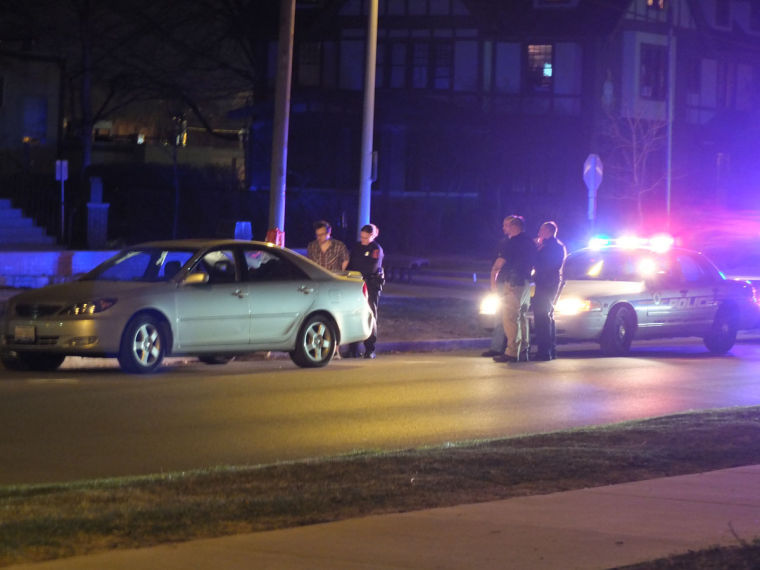 University Police stop a man on Green and Fifth streets who had an open alcoholic beverage in the vehicle. Crime has decreased on campus lately.

The University of Illinois Police Department works every day to keep students safe. But it also believes that campus safety is a partnership between police officers and students.

Crime is often in the back of many students’ minds, but they don’t always remember that the police are there to help, not to get them in trouble.

Jeff Christensen, UIPD police chief, said the most common type of crime that occurs on campus is property theft.

“Our number one crime is property crime,” he said. “But we’re not this sacred island, so we do have violent crime that unfortunately happens, and we work very hard with neighboring agencies to prevent that.”

Christensen said the Campus Safety Notices that students receive can sometimes make them feel unsafe because it makes them concerned about the crime levels around campus.

“But the purpose of those Campus Safety Notices is to protect people, to make them safe,” Christensen said. “So that’s why we push them out, so people know what’s happening.”

Patrick Wade, communications specialist at the UIPD, said that based on a yearly review of crime statistics, such as how many incidents occur each year, there has not been any significant changes in the trends of different crimes on campus.

“The Year in Review will show our crime stats compared to other schools that we see ourselves as comparable with,” he said. “So the other Big Ten schools and a couple of California schools.”

He said it looks at schools that are similar to the University in both size and community.

There haven’t been any “alarming peaks,” Christensen said; the trends have remained fairly consistent.

“When you look at that as far as aggravated assault, robbery, I think sexual assault, we’re kind of right in the middle of where everyone else is at,” Wade said. “Yes, violent crime happens here, just like it happens