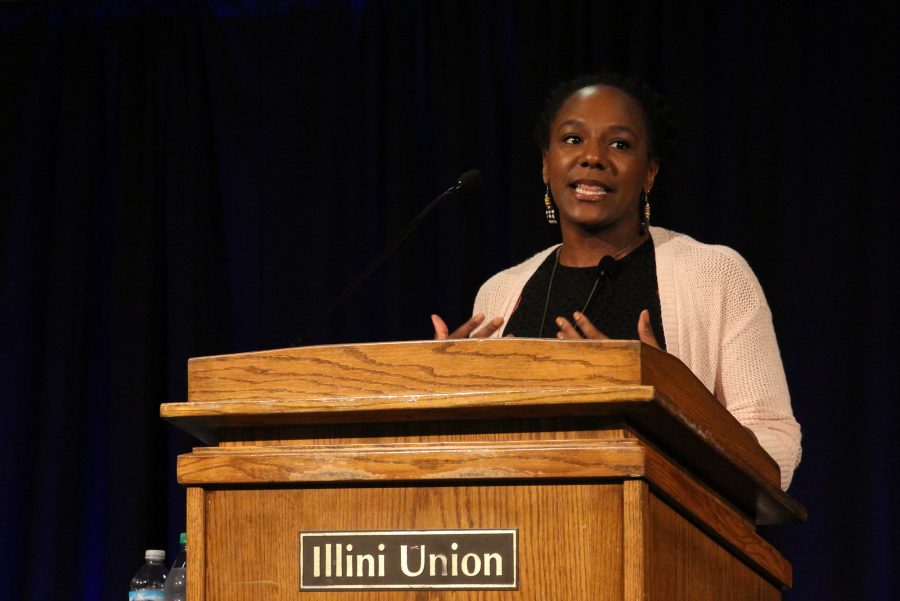 Bree Newsome talks at the Illini Union on Tuesday. Newsome spoke about her experience tearing down the Confederate flag from the North Carolina State House.

Bree Newsome had no intention of ever getting arrested again. Her first arrest was in July of 2013 when she and five other activists were arrested for staging a sit-in at Republican North Carolina House Speaker Thom Tillis’ office. They were protesting what they viewed as discriminatory state voter registration I.D. laws. The bill eventually passed.

The summer of 2015 led to a major change in her perspective, spurred by major social movements.

Standing at a podium, Newsome spoke to a small crowd in the Illini Union Ballroom about her experiences as an activist and black woman.

Newsome served as the keynote speaker for the iUnite Week occurring Monday to Friday. She has been touring and giving her lecture, “Tearing Hatred from the Sky,” to many college campuses nationwide.

Specifically, she spoke of removing the Confederate flag from the South Carolina state house grounds and subsequent second arrest on June 27, 2015.

“I still felt so strongly that the point must be made how absolutely intolerable it was for that flag to fly another day, especially as the American and State flag flew beneath it at half staff,” Newsome said.

State officials had lowered the two flags in remembrance of the nine people killed at the Emanuel African Methodist Episcopal Church in Charleston, S.C. on June 17, 2015.

A history of statehood racism

The Charleston shooting stemmed from two specific incidents of racial tension in South Carolina, Newsome told the crowd: the fatal shooting of Walter Scott by a North Charleston police officer in April of 2015 and the historic attacks on black churches and civil rights leaders, such as the 1963 assassination of civil rights activist Medgar Evers as an example.

The shooting sparked intense civil action and protest started surrounding the Confederate flag. Newsome’s action was a piece of a larger dialogue. Yet for her, it came far too late.

“Tragically, shamefully, it took the blood of nine more innocent people to finally shape the consciousness of this state and of this nation surrounding this symbol of slavery, hatred and terrorism that is the confederate flag,” Newsome said.

As both a filmmaker and activist, she routinely entwined cinematic and historical anecdotes within her personal narrative. By doing so, she encouraged audience members to seek out information on unfamiliar topics mentioned during the keynote.

The deaths of Trayvon Martin, Emmett Till and Medgar Evers, as well as the film Selma, were among her references in her presentation.

While attending a national conference, student members of the Illini Union Board first heard Newsome speak, Boten said. So impressed by her story, they encouraged their advisor to have her speak at the University.

“She fit with our theme of what we’re trying to do in terms of things people can do to bring people together and make the campus better,” Boten said.

“She was really somebody that the people I know that work on things within social justice were able to see as somebody who really took hold of what was happening around her,” Boten said.

The event ended with open Q&A with the audience. Newsome replied she is not concerned about being remembered solely for removing the Confederate flag.

“If at the very least, folks know that I walk the talk,” she said. “When I show up to my community and say ‘are we really about this?’ folks know I’m about it.”

She compared this experience to Rosa Park’s lifetime of activism boiled down to a “popular perception” of refusing to leave her seat on a public bus in 1955.

Newsome hopes to see results of her activism in her lifetime. However, she’s aware it likely will not. Her work results from the efforts of Parks and others leading a similar fight she said is “over 500 years or so old.”

“I may be out here planting seeds for a tree that I’ll never see,” Newsome said. “But I’m okay with that.”