It happened here: Student witnesses reflect on a night of violence 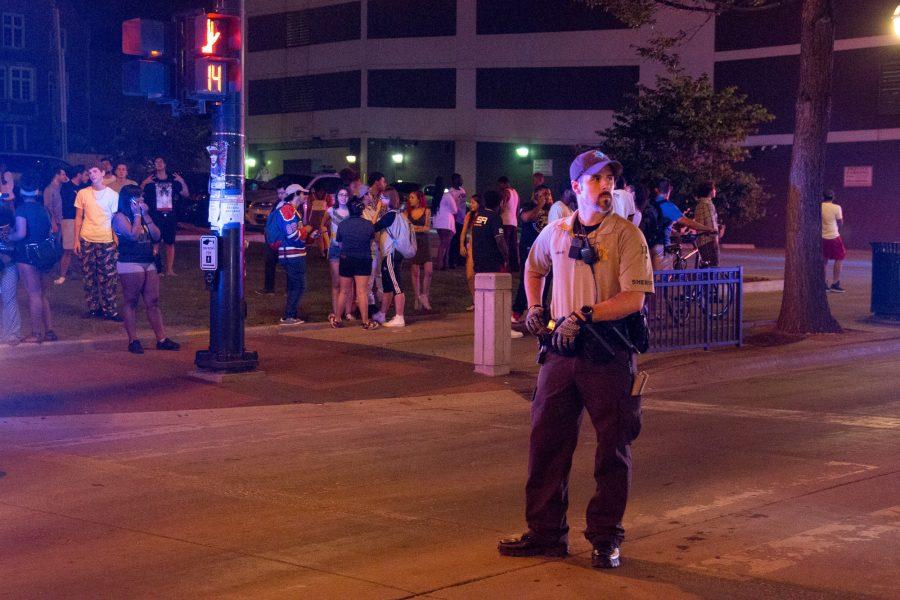 Students gather at the intersection of Green and Fourth Street after a shooting that took place early Sunday morning.

Timeline of the events

Shooting occurs between Third and Fourth streets on Green Street

Illini-Alert says shooter is out of campus district

Suspect is still at large

Editor’s note: Camille Baer is an Illini Media Company employee. Her testimony was included because she was an eyewitness in the events that follow.

Camille Baer and a friend lagged behind their group walking back to Campustown.

But not by too much.

“We wanted to be safe,” the University freshman recalled.

They were coming from The Pygmalion Festival in downtown Champaign after midnight when they approached the Evergreen Tobacco building.

She turned around to see what looked like 70 people running and screaming. Then, the sound of six or seven gunshots filled the early Sunday morning air.

“I just ducked, I just crouched into a ball,” Baer said. “Then I saw people running and I was like, ‘What am I doing? I should be running.’”

As she got up, a man approached her and her friend. He was gushing blood.

Bianca Sage was standing in the beer garden at The Red Lion. She and some friends had come outside because it wasn’t fun inside. There was no music playing, and it was quiet.

Without warning, she and the other people were pushed inside the bar and were not allowed to leave. After a few minutes, they were ushered into a back alley.

“They were putting us out there not knowing  where the shooter (was),” she said. “It was definitely scary not knowing if you were just passing the shooter on the street or not.”

On Green Street, Kathryn Lawler was taking a Snapchat to document her 23rd birthday celebration. Just as she started recording, gunshots rang out in the background.

At 12:38 a.m., gunshots were fired in the 300 block of Green Street. An altercation at a party near Evergreen Tobacco led to a gunfight that killed one person and wounded three others.

After the gunshots, Lawler and John-Michael McMahon started running. Another friend, Megan Flanagan, hit the ground.

“I have never seen so many people panic at once,” McMahon said. “It was just kind of like everyone did what they could to get shelter.”

One person ran across the street.

“I saw her get hit by a car. I thought something really bad happened,” Flanagan said. “She was laying on the ground. Everyone (was) running around.”

The victim of the hit-and-run got up.

“This girl (was) crying … her nose was bleeding,” Flanagan said.

On a nearby street, Baer’s friend was on hold with the police. Almost 10 minutes passed. Baer held the man’s injured arm up against a wall. His arm continued to bleed.

As they waited for the ambulance, she told him not to move. But he raised his shaking arm to point a half block in the distance.

“That’s my apartment right over there,” the man said.

After he left in the ambulance and she knew he would be OK, Baer showed the police where they saw the man.

“He was just a random person walking by. He had a takeout bag,” Baer said.

As she headed home, she noticed the blood all over her.

“I went to Chopstix to wash the blood off my hands,” she said.

Meanwhile, from above, Maryam Bassiri watched the commotion from her apartment building, as the cops herded people out of the area.

“There were people walking around,” Bassiri said. “The Chopstix car was going in and out making deliveries.”

At Carle Foundation Hospital at 1:02 a.m., George Korchev, who was visiting from Mundelein, Illinois, was pronounced dead. Champaign County Coroner Duane Northrup identified the  22-year-old man who did not attend the University.

At 1:08 a.m., police received another report of gunfire in the 700 block of South State Street. An additional victim was transported to the hospital.

After washing up, Baer reunited with her roommate who had sent her over 100 text messages. She returned home and realized the man’s blood was still on her leg.

Since Sunday, it’s been hard for Baer, who’s been on campus for six weeks, to fathom what just happened.