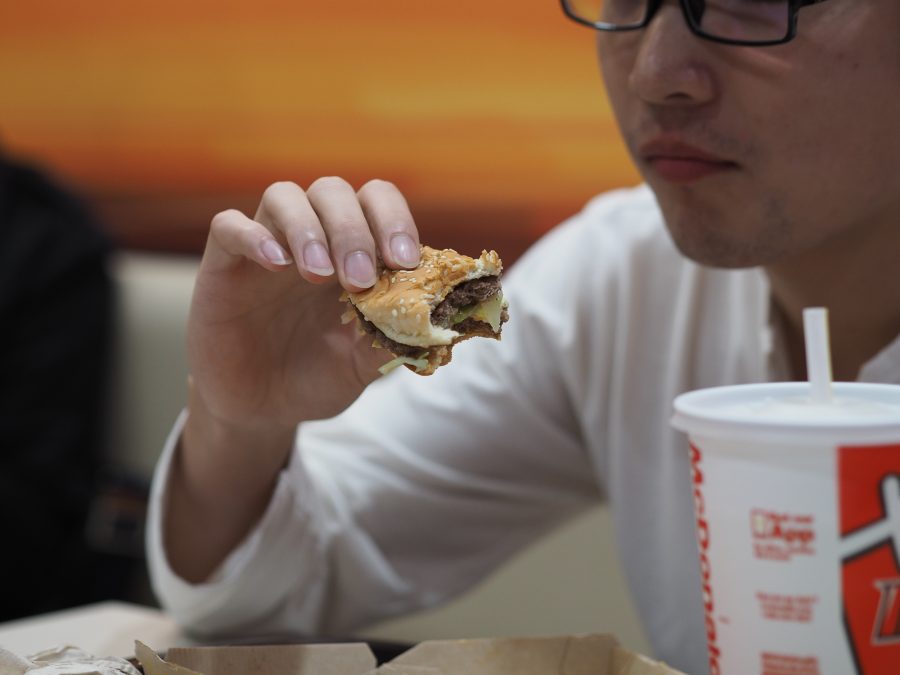 Students oftentimes forego eating in order to save calories for drinking. October 16, 2016.

University students starve themselves all day long in order to get drunk quicker and without consuming extra calories.

According to a recent study by the Research Society on Alcoholism, college students are skipping meals to get drunk cheaper and faster. They will also work out excessively to avoid gaining weight from binge drinking.

“I haven’t heard of (drunkorexia) occurring on a regular basis, but I have heard of people doing it before and have definitely seen people get a lot more intoxicated by not eating before they drink,” said Lorna Gilmore, senior in social work.

The report shows that one third of college students engage in this activity, and that students don’t drink casually but rather to get blackout drunk.

Joseph Ketchem, the alcohol enforcement sergeant at the Champaign Police Department, expressed his concern over the recent epidemic.

“It’s stupid,” Ketchem said. “Any time you are starving yourself in order for you to go out and drink, not only will there be medical problems, but safety issues as well.”

A growing number of colleges are banning hard liquor on campuses in an attempt to moderate extreme drinking. For example, schools such as Stanford University and Dartmouth University placed bans on the consumption of hard liquor.

“Alcoholism can lead to people trying other drugs. It leads to them not showing up for classes, binge drinking, binge eating and not eating at all,” he said. “It’s a huge problem, not just among college students.”

Bob Wilczynski, assistant director of University Housing, said that he is aware of the concept of drunkorexia but that as far as he knows, there is no direct attribution to it here at Illinois.

There has been no detection of students intentionally starving themselves to drink, he said, but that he isn’t surprised that this category exists because of its correlation with body issues.

According to the study, athletes and students who live in fraternities and sororities were more likely to report such behaviors.

Wilczynski said that he sees why drunkorexia could be more prominent among greek organizations.

“In the residence halls where there is more opportunity to run into staff, there is a considerable amount of deterrence,” he said. “Because there is a lack of oversight in greek houses and private residences, I can see it probably being more likely.”

Ketchem, however, was unsure about whether drunkorexia should be attributed mostly to fraternities and sororities.

“I don’t know if we see a big difference between those kids we arrest and transport (to hospitals) who are involved in greek life,” he said. “You don’t have to be in a frat or sorority to go to bars and parties and overdrink.”

According to the National Institute on Alcohol Abuse and Alcoholism, having five drinks or more on the same occasion is considered heavy drinking. Their report also showcased that men and women are equally susceptible to drunkorexia-related behaviors.

Heavy drinking is a problem when students have multiple drinking tickets or have been transported to the hospital because of drinking.

“If it is affecting your life in any way, it is a problem,” Ketchem said.

More than half of Americans aged 12 or older reported being current drinkers of alcohol, with 23 percent classifying as binge drinkers, according to the Substance Abuse and Mental Health Services Administration.

“As many as 80 percent of heavy college drinkers are found to be either starving themselves, restricting calories or over exercising,” according to the study.

Ketchem suggested that drunkorexia may perhaps only be common on campus during Unofficial.

Unofficial St. Patrick’s Day is an all-day (and commonly all-weekend) drinking event that occurs at the University a week prior to spring break. Students from the University, residents of Urbana and Champaign, as well as people from all over the United States travel to the University for the holiday.

“People have a tendency to drink from 5 a.m. to midnight on Unofficial, and that is where the problem lies,” Ketchem said.

Despite the hype associated with Unofficial, he said, it has been closely moderated, especially within the last 20 years.

Meanwhile, Wilczynski believes that the alcohol culture among college students at the University hasn’t changed.

“Within the last five years, the amount of alcohol consumption has been concerning, but I don’t think this year is any better or worse,” Wilczynski said. “It is maintaining a trend that the University is hoping to respond to and change.”

There are ways for students to look out for each other and to help those who may have an alcohol problem, such as connecting them to dining hall dieticians, the Counseling Center or the Alcohol and Other Drug Office, Wilczynski said.

“If you notice signs on a student that they might be experiencing nontraditional eating habits or see signs of drunkorexia, talk to them and offer them support,” he said. “There’s a variety of different resources to help students navigate this difficult issue.”

“it is definitely prominent on campus,” he said. “There is a lot more the University can do to moderate it.”
[email protected]