Sen. Durbin reflects on the legacy of the party of Lincoln 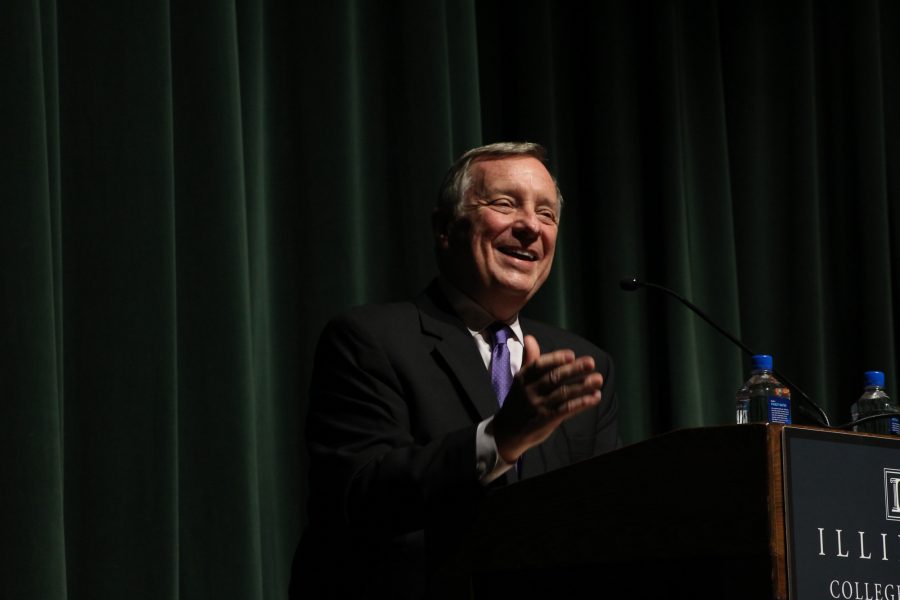 As the party of Lincoln continues to create controversy during the 2016 Presidential Election, U.S. Sen. Dick Durbin spoke on campus about the president’s lasting legacy in modern Illinois and in the nation overall.

Durbin gave the lecture on Monday evening as part of the lecture series “The New Lincoln Lecture: What Abraham Lincoln Means to the 21st Century,” which is sponsored by the University’s College of Law.

After College of Law Dean Vikram Amar introduced him, Durbin began his lecture by outlining Abraham Lincoln’s rise to the presidency.

“Lincoln said, at its best, government exists to elevate the condition of men, to lift artificial weights off of shoulders, to clear paths of honorable pursuits for all,” Durbin said. “It’s time to reconnect to Lincoln’s visions.”

He also discussed the Morrill Acts, passed by Lincoln, which established land-grant universities such as the University of Illinois.

“Land-grant colleges democratized education in frontier America,” he said. “Scores of colleges and universities in America, including this university in Illinois, exist today because at the darkest time in our history, leaders like Lincoln could see a better America.”

Throughout his lecture, Durbin touched on many topics including wealth inequality, rising tuition costs, the rhetoric of the 2016 presidential election and the American criminal system.

“This war on drugs has created an unprecedented growth of American prisons … the war on drugs has filled America’s jails and prisons with thousands of nonviolent drug offenders, mostly poor people of color,” he said.

Durbin also said the price tag of the prison system is “considerable.”

Today America locks up black people, he said, more than South Africa did during apartheid.

“People of color are disproportionately arrested, convicted and incarcerated in America,” Durbin said. “We are beyond the original sin of slavery, but we’re not guiltless when it comes to discrimination.”

Half of all college graduates are those who come from families with incomes of at least $116,000. he said. Ten percent of all graduates come from households that make less than $35,000.

“At no time in our modern history has so few held so much of the wealth,” Durbin said. “That’s not what Lincoln had as his vision of Democracy … student debt, the widening chasm between wealth and working and the inequitable criminal justice system threaten Lincoln’s view of America’s democracy.”

Durbin also addressed the presidential election and the political discourse between the two candidates. He said when people turn on the TV or check Twitter they will hear the “most violent, disgusting and dangerous rhetoric.”

“Sadly, it’s coming from the campaign … that represents the party of Lincoln,” he said.

He said people who feel frustrated with the way the presidential campaigns are being run need to ask “WWLT,” or “What would Lincoln Tweet?”

“The only way this (election) comes back down to Earth is if … the students and grown ups get involved in a process that is respectful, is on merits and really tries to find common ground and be willing to compromise,” he said.

America, he said, has no place for those who seek to divide the nation based on race or religion. However, Durbin said that he is “optimistic” despite this “contentious” election.

“We live in uncertain, sometimes dangerous times,” he said. “But if Lincoln could face down Wall Street, if he could challenge the awesome power of the American people, if he could lay a foundation for a modern economy and create economic opportunity and at the same time save the Union … surely we could find our way through our present troubles”