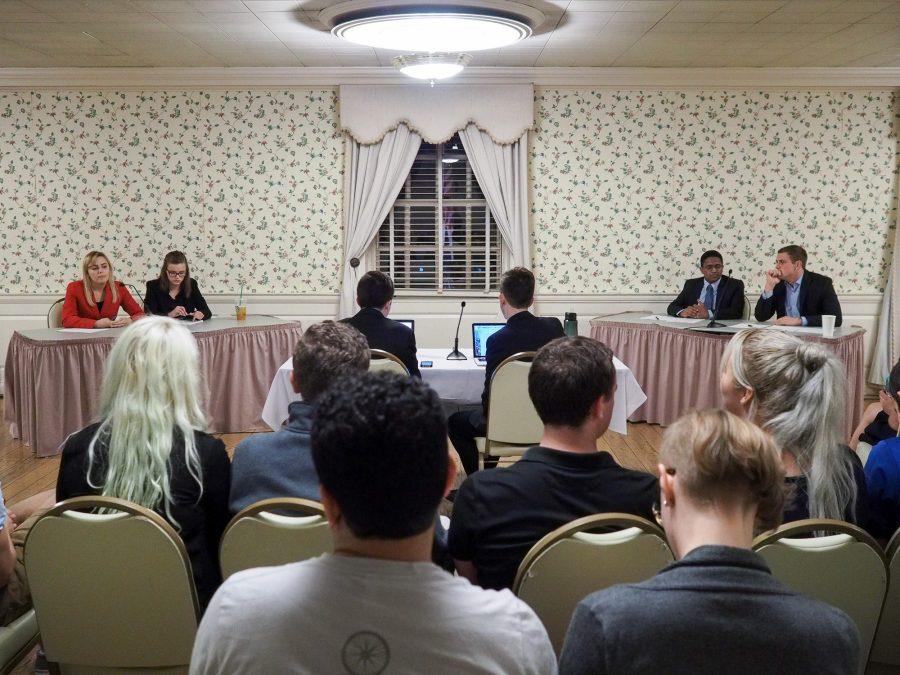 On the day of his resignation as president of Illini Republicans, Chris Piper received an email from the University of Illinois Police Department. Unbeknownst to him, Piper’s peers had contacted the police regarding his involvement in a private bank account scandal.

As the president, Piper, a junior in LAS who is taking the semester off, held the organization’s funds in a private bank account. Two members, Debbie Bernal, junior in AHS, and Kathleen Brown, graduate student in LAS, took issue and alerted the police.

In the email, University Police Officer A. J. Martin informed Piper and Brown that it isn’t illegal for RSOs to hold off campus bank accounts. After talking with the University’s RSO office, Martin said it’s in fact very common.

“It is especially common due to the lengthy time it takes to get reimbursement from the University,” Martin said in the email. “It is, however, a violation of rule to take funds from activities held on the University of Illinois campus to an off-campus bank.”

At the insistence of club members, Piper resigned as president, but he believes they wanted more than just a resignation.

“There’s an end goal of hurting me personally, trying to get my reputation tarnished, to drag my name through the mud (and) to make me have to go through a potential investigation,” Piper said.

However, some members of Illini Republicans believe legal actions against Piper are justified. Some members, like sophomore in Engineering and LAS Benjamin Correll, thought the illegality couldn’t be ignored.

The initial problem was that they didn’t want to involve the police.

“We all respected Chris and didn’t want to him to get kicked out of the University, but decided it was the proper action to take,” he said.

The conflict within the political club began even before the start of the semester, according to Piper. Since he planned on taking this semester off, Piper ran for re-election on a joint ticket with Stephanie Menezes, junior in MCB, last spring.

After a unanimous victory, Menezes became president for the fall semester while Piper worked in Marion, Illinois, for the Illinois House Republican Organization. Menezes declined to comment on this article.

While Piper is expecting to return to his position as president this spring, conflict between the two presidents and the executive board make it clear that that would be impossible.

In addition to the private bank account issue, Correll said Piper held too much power in the club despite not being a student this semester.

“We had numerous problems with this arrangement,” Correll said. “When he actually went away, he tried to control how the RSO acted and how the RSO proceeded, basically (controlling) on campus matters without actually being a student.”

As Piper worked through Menezes from afar, the two clashed with executive board members on issues about event planning, the president’s role in the club and the responsibilities of the executive board.

But all this came to a head on Oct. 8, when Piper published a post on the Illini Republicans’ Facebook page denouncing Donald Trump’s lewd statements about women. Piper said he and the executive board agreed to post about the topic, but the executive board took issue with Piper’s actual post, which went live without their approval.

While he noted some members thought the words against Trump were too harsh, Piper disagrees.

“We could have gone much further and could have said many other negative things about him up to this point,” Piper said

“Donald Trump’s recently revealed comments towards women are reprehensible,” the post stated. “On a campus that struggles to fight sexual assault, we find it absolutely necessary to condemn his words and actions. The Illini Republicans stand for the equality of all women and for all people to be treated in a fair and respectful manner.”

Correll credited Piper’s post as the tipping point. As the club was split on supporting Trump, Correll said it was inappropriate for Piper to bypass the executive board’s approval.

Piper said these accusations were brought forth by executive board members Bernal, Brown, Elena Ahasic and Jonathan Heideman among others.

The evening Piper received the petition, he sent out an email to all members of Illini Republicans titled “You Decide if I Step Down.” The email asked all members to voice their opinions on the petition for his and Menezes’ resignations.

“My ego is not big enough to hold a leadership position in an organization whose membership no longer wants me to be a part of it,” he wrote. “I am asking all of you to voice your opinions now by responding with a vote of approval or disapproval. I will step down and remove any affiliations I have with this group if I no longer am supported.”

This started an email chain in which students voiced their opinions about Piper’s departure.

“Let’s not forget the fact that you have stashed our dues and funding in a private bank account with zero oversight — even by our treasurer! — which is also a violation of multiple sets of university codes, as well as lying to and deflecting questions about the setup,” Kelvin Ma, a student in computer science, wrote.

Piper claims he offered to add the treasurer, Heideman, but it was decided between the two of them that it would be easier for Piper to hold the funds.

“The fact that a self-proclaimed Republican would say anything negative about the Republican nomination in an election as critical as this one is mind boggling,” student Charles Dochoff wrote. “Do you even perceive the consequences if Hillary appoints the next Supreme Court judge?”

In lieu of the email backlash, Piper resigned. He handed over the administrative control of the group’s Facebook page and sent a check of all the money in the separate account.

Although Illini Republicans asked her to resign alongside Piper, Menezes has not officially stepped down. No members have heard from Menezes since, Correll said.

Piper said he plans to start a new organization next semester.

“I’m washing my hands clean of this organization,” Piper said. “I don’t want to have anything to do with these people ever again. I think they’ve shown their character.”

On Tuesday, Illini Republicans released an apologetic Facebook post for how chaotic the past few weeks had been. They promised to be holding new elections for what they claim to be a vacant presidency.

“Our main goal is to run (Illini Republicans) as a democracy, granting all members the opportunity to propose ideas, voice concerns, and most importantly, elect officials,” according to the Facebook post. “If any of you have questions or would like to become more involved in the organization, feel free to reach out to us!”

Correll said the club has finally developed a charter which he hopes will allow them to avoid problems like these in the future.
“As a club we’re strong, we’ll move forward and we will rebuild,” Correll said. “We’ll rebuild the club and make it great again.”