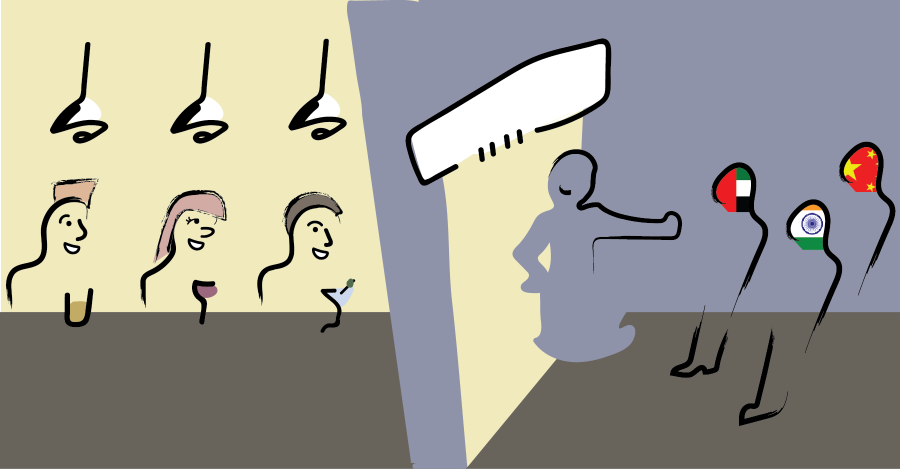 Chirag Khushalani doesn’t have an Illinois driver’s license and up until recently, that didn’t seem like such a big deal. But beginning in April 2016, every time he tried to go to The Red Lion or The Clybourne, he was denied entry because he didn’t have an Illinois ID.

Khushalani, a sophomore in Business, tried using his United Arab Emirates ID to prove his age at the bars but was denied. He is one of approximately 11,000 international students who attend the University.

“It’s kind of insulting because being apart of this student community, I’m really interested in socializing and meeting people,” Khushalani said. “I’m legally allowed to be there.”

General manager of The Red Lion and The Clybourne, Jason Reda, declined to comment on this story.

Bouncers now encourage international students to bring their passports if they want entry to the bars, Khushalani said.

Nikhil Jerath, a sophomore in Engineering and an Indian citizen, started using his passport as a form of identification. Yet Jerath is anxious about the arrangement, especially with the possibility of inadvertently losing it.

“I don’t feel comfortable having to rely on my passport for the rest of my college career,” he said. “I still have three years left, and anything can happen in three years.”

Some students have also been denied entrance while using replacement IDs. According to a new state policy, people who receive a driver’s license must get a temporary paper ID until their official ID arrives in the mail.

Nikki Thayyil, senior in Business, used her passport  while waiting for a replacement state ID to arrive in the mail. She’s seen some bars on campus decline her friends for using temporary IDs.

Thayyil said all bars except Joe’s Brewery decline temporary IDs, which she thinks is a known policy around campus.

“It doesn’t seem like there’s a basis for why they don’t let people use the paper IDs,” she said. “If there was a reason, and they specifically said the reason, I think that more people would be understanding.”

Though Thayyil believes bars lack transparency, some bars on campus communicate their ID processes more clearly. Murphy’s pub manager Alyssa Ullrich said the bar handles the issue by requiring both the temporary license and the ID being replaced.

Since Murphy’s is used to the new regulations, Ullrich said it’s better to make sure they aren’t serving anyone attempting to use a fake or duplicate ID.

Khushalani is too nervous to carry his passport and international advising specialist Melissa Chin tells international students to keep their passports in a secure place.

“We encourage students to keep their passports in a safe place, so ideally (bars on campus) would want students to carry copies of their passports rather than the original passport, just because it can be kind of hard to replace it if it gets lost,” Chin said.

Students who lose or damage their passports will have to go to their home country’s Chicago consulate to get a replacement.

However, he’s weary of beginning that long legal process.

“There’s a human rights and discrimination case that could be filed, but I don’t want to get into that right now because there’s a lot of red tape to get involved in that,” Khushalani said.

Betz said this issue hadsbeen raised multiple times in his office this year, and he doesn’t recall this being a problem in the past.

Betz can’t find a valid reason why bars would institute this additional hurdle for the international students. He’s told students who’ve faced this issue to file a complaint with the Champaign Human Relations Commission.

Community relations manager and compliance officer for the City of Champaign Rachel Joy said her office has not heard any complaints from international students about discrimination. If students do feel they’ve been discriminated against, she recommended they file a complaint with Community Relations so they could begin an investigation.

“So what is their policy around IDs that are accepted? What are their policies around other individuals that have come in?” Joy said. “In other words, are there particular countries that people are coming from and their IDs are accepted, but this particular person is not, so there has to be that despair treatment.”

Certain bars have protocols allowing them to check if international IDs are authentic and acceptable. Ullrich said Murphy’s accepts international driver’s licenses, visas and passports. If there is ever a question about an ID, Murphy’s uses a U.S. and international ID reference guide and alerts a manager.

Champaign deputy liquor commissioner Matt Roeschley said the official liquor code requires all bars that hold a Champaign Liquor License to verify that their patrons are of the legal entry and drinking age.

Driver’s licenses or permits, state ID cards, Armed Forces identifications and passports all constitute lawful uses of identification, according to Sec. 5-66 of the city’s liquor code. However, it does not require licensed establishments to accept the specific identification listed.

“Beyond that, the city liquor code does not address what forms of ID the bars have to require or get into any of the details of how or why they determine someone is of legal age,” Roeschley said. “Our code is silent of whether an international ID is acceptable or not acceptable.”

Roeschley is unaware of any bars accused of practicing discrimination.

Champaign’s sergeant of alcohol enforcement Joe Ketchum also defended the bar’s ability to deny entrance to whoever they choose. He argued that these bars don’t accept international IDs because they can’t detect their authenticity.

“I’m going to guess though that maybe some of the IDs are not in English, so they can’t read them, so they try to match them up to an I-card or a passport,” Ketchum said. “Some of the international IDs are easy to be made fake, so they’re a little bit more careful about that.”

Ketchum also raised concern about students sharing international IDs to get into bars. He recommended students talk to the bars directly if they feel they are being discriminated against.

“There’s no crime being committed,” Ketchum said. “But you have to understand as a business they can deny entry to anyone they want to, especially when they’re trying to be careful not to let 18-year-olds or people underaged in to drink and things like that.”

Though he believes the management at The Clybourne and The Red Lion aren’t discriminating based on race, Khushalani said their denial of international IDs is still discrimination.

Khushalani claims the bars are never willing to give an answer, including general managers.

“All I get (for) a reply is, ‘This is our new policy.’ That isn’t enough for me,” he said. “I shouldn’t be nervous to get into a bar because I know I’m allowed to be inside.”