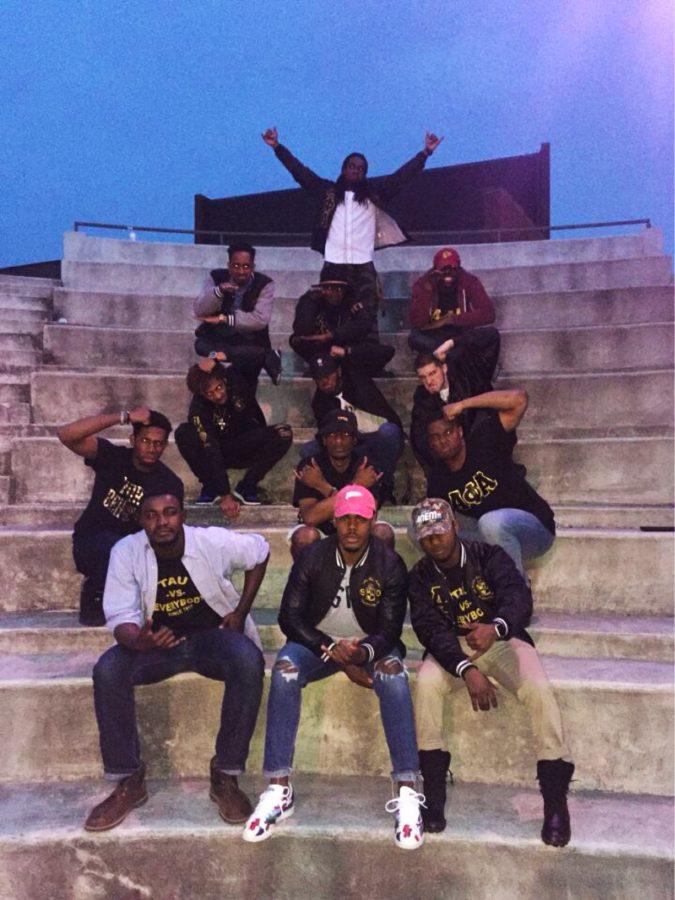 Members of Alpha Phi Alpha pose outside of Krannert after a step show last year.

Following its mission statement in the guidebook of Alpha Phi Alpha’s national program, A Voteless People is a Hopeless People, is Martin Luther King Jr.’s 1957 speech from the March on Washington, “Give Us the Ballot, We Will Transform the South.”

“All types of conniving methods are still being used to prevent Negroes from becoming registered voters. The denial of this sacred right is a tragic betrayal of the highest mandates of our democratic traditions and it is democracy turned upside down. So long as I do not firmly and irrevocably possess the right to vote I do not possess myself. I cannot make up my mind — it is made up for me.”

Dr. King’s words and those of other activists who paved the way for black voters during the Civil Rights Movement still echo in the ears of some black fraternity brothers at Illinois.

At Boston University, Martin Luther King Jr. was a member of Alpha Phi Alpha. The fraternity’s Tau chapter was established at the University in 1917 and the A Voteless People is a Hopeless People national program in the mid 1930s. While conditions have changed since Dr. King’s speech decades ago, voter intimidation at the polls and racism have been widely discussed this presidential election year.

“It’s very important for us, being in a black fraternity, black Greeks, to be registered to vote,” said Jacob Reed of Omega Psi Phi Fraternity, Inc. “It’s so important, historically, that we couldn’t vote and then finally getting the right to vote. It’s almost like paying homage to our ancestors in some way.”

Reed, a senior, said Omega Psi Phi holds a program before every election to help people register to vote. This year, it was Reed’s event and he chose to hold registration outside Parkland in an effort to get into the Champaign community outside of just campus.

Voting is not a requirement of the fraternity, but voter registration is a national program so it’s important to the fraternity to help register voters in the community.

“We really wanted to connect with folks in the Champaign area, more so than just the students, because I feel like there are a lot of voter registration efforts already happening on campus,” Reed said.

New members are required to register to vote, and everyone in the fraternity will be voting this year, Roberson said.

The Alpha Phi Alpha house also held a debate watch party at their house on Oct. 19.  Roberson said Alpha Phi Alpha brother and Ron Lewis, University study body president, brought some of his fellow student senators to the house where he approximated 55-60 people crowded the fraternity’s living room to watch the debate together on a single television.

“We brought people who may not normally even make eye contact on campus in one setting, a setting that’s not typically available to everyone,” Roberson said. “I thought it was really important, building awareness and bridging a gap.”

The debate was followed by some brief discussion, but it did not take on an argumentative tone, despite Roberson recognizing the potential for viewpoints in the room to clash.

“It probably could have easily gotten heated because there were a lot of different demographics in the room,” Roberson said. “But our goal wasn’t to push for it to be like a debate; the communities that were present aren’t often around each other and they probably didn’t feel comfortable enough to really express how they really really felt about everything that was happening.”

A Voteless People is a Hopeless People guidelines state that Alpha Phi Alpha fraternity chapters “must include voters across all demographics, including, but not limited to, those of Hispanic heritage and the youth (eligible high school students, college and university students) voters.”

Steve Jones, the national chairman for A Voteless People is a Hopeless People, said the focus of the program is to encourage initiatives pertaining to being informed and registered voters for “all elections, not to focus on presidential per se, but to look at local and midterm elections as well.”

Although not an Alpha Phi Alpha, Reed agrees that focusing on voting for each election is important.

“As members of a black fraternity, we do have that social capital,” Reed said. “So with us getting involved and showing the importance of voting, not just for the presidency but local and for the state, you have a little more control over what happens here in Champaign.”

Roberson said the events and initiatives sponsored by the fraternity during election season don’t pressure voters to voice their political leanings or candidate of choice. The guidelines make no nod to support a party and while the program was established and developed alongside times of extreme strife for black voters specifically, the program is hinged on its dedication to voter registration of all demographics when it comes to getting community members registered to vote.

Roberson said he’s noted issues of racist rhetoric being used this campaign season. The fraternity discussions within the house aren’t always party specific, but instead often focus on issues they find important, such as police brutality and mass incarceration, he said. The comments on race from candidates and supporters have been a topic of conversation in the house but have not been surprising to him.

“We are all aware of what kind of country we live in, just given the climate of simple things like (Colin) Kaepernick kneeling during football games, people asking people to pay attention to black lives,” said Roberson. “It’s the reality of where we live.”

A previous version of this article named Brent Roberson and incorrectly the fraternity as Omega Phi Psi.