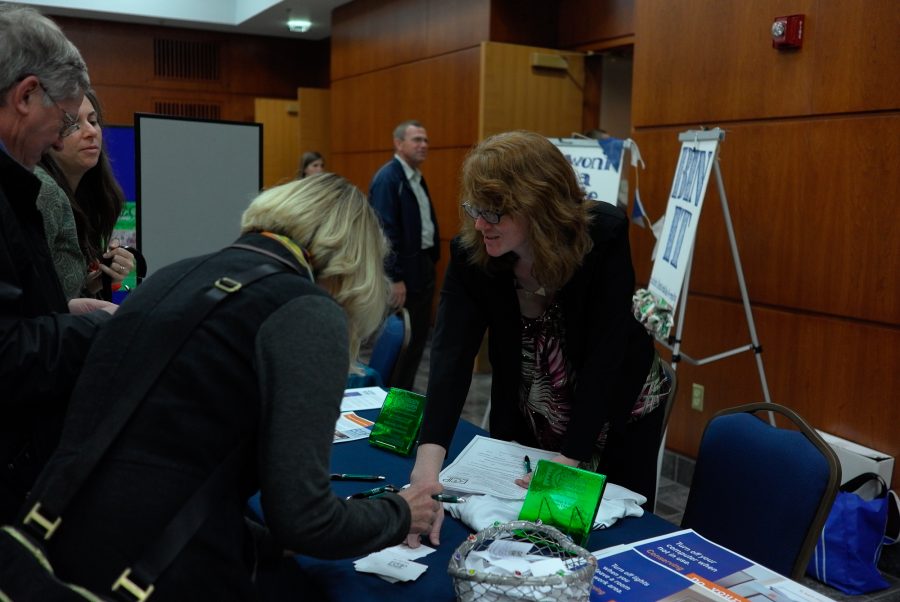 Last Wednesday, The Campus Sustainability Celebration, held in the Alice Campbell Alumni Center, honored buildings on campus that reduced their energy consumption this past year.

Ben McCall, professor of chemistry and Associate Director for Campus Sustainability at the Institute for Sustainability, Energy and the Environment (ISEE), spoke about the primary goal of the Illinois Climate Action Plan (ICAP).

The Illinois Climate Action Plan states the campus will be carbon neutral by 2050. In his past three years as associate director, McCall quickly realized the 2050 date is a tall order.

“We emit almost half a million tons of carbon dioxide every year into the atmosphere,” McCall said. “So going from that to zero will take a lot of intensive work over the coming years and decades.”

Yet during his speech, McCall made no reference to his impending resignation as associate director by the end of the year.

“I came to the point where I felt I had helped to accomplish a lot of great things here at ISEE, and I wanted focus on other ways that I could make a difference,” he said.

McCall decided not to broadcast his departure until his successor is named. He plans to refocus his energies on teaching and research with an emphasis on sustainability.

Under his leadership, the Institute for Sustainability, Energy and the Environment created a solar farm, reduced energy usage in campus buildings, improved signage for recycling and created an initiative to take waste from dining hall vegetables and convert it to bio-diesel fuel.

However, the Illinois Climate Action Plan was McCall’s leading cause. Former University Chancellor Robert A. Easter enacted the plan in 2010, and McCall helped revise it in 2015.

However, his landmark project faces deficient funds and a decentralized organization of the campus. Had these obstacles not been present, McCall may have continued in the position.

“If that were the case, that might have tipped the calculus in my mind that I can make a bigger difference staying here at ISEE and continue to push forward to meeting the ICAP objectives,” he said.

But McCall is not alone. Difficulties obtaining proper funds for sustainability professionals troubles many University officials.

Johnston said multiple buildings on campus have already agreed to implement solar panels as part of the Illinois Climate Action Plan. However, the University does not currently want to pay for the installation.

“The fact is somebody has to pay to get it installed, and there is not an existing fund source for solar energy on campus,” she said.

Other members of the sustainability community have felt their goals weren’t prioritized by the University. Alex Dzurick, masters student in education and a member of the Student Sustainability Committee, has noticed struggles with how to allocate attention to sustainability.

“I think that oftentimes sustainability simply gets put at the end of that list,” Dzurick said. “Not necessarily dismissed or ignored, or actively worked against, but simply not prioritized.”

Scott Willenbrock, professor of physics, was recently named the 2016-2017 Provost Fellow for Sustainability.  In this one-year position, he works with the Provost’s office to gain support for sustainability initiatives.

Willenbrock said he does not yet know how to address absent substantial funds.

“You’ll have to take it easy on me, I’ve only been in this position for seven weeks,” Willenbrock said. “One of the things I don’t understand yet really is how money flows through the University.”

The budget impasse serves as the main reason for absent funds, McCall said.  He claims legislators have not been forthcoming in recent years in their support of the University.

“If the state returned to its historical level of support for the University, everything would be a lot easier, not just sustainability,” McCall said.