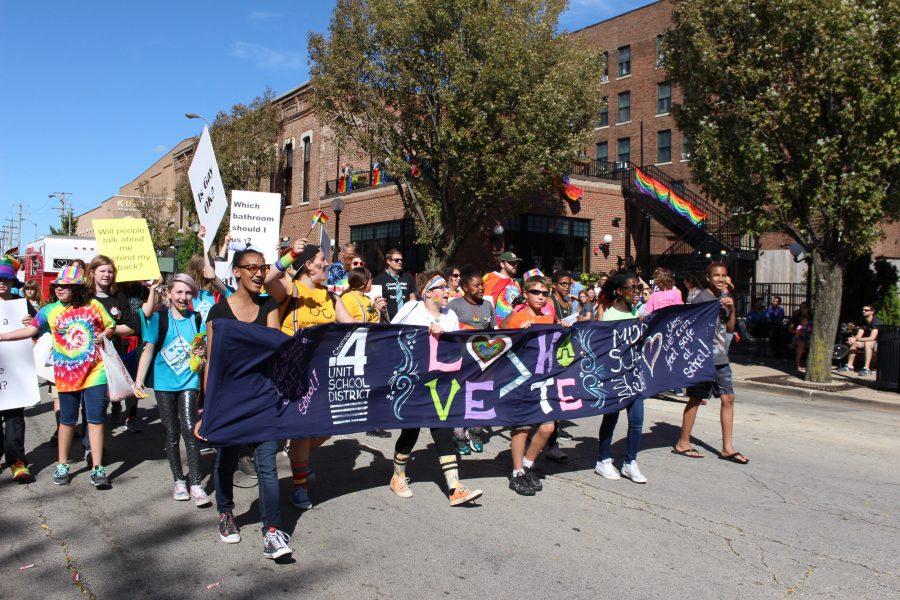 Champaign Unit 4 School District promote a message of love and acceptance in the CU Pride Parade.

In Champaign, the LGBT community is treated more equally by the city government than the average city in the nation, according to a report released by the Human Rights Campaign (HRC).

“The Champaign score is 77, which is above the national average of 55,” said Xavier Persad, legislative council for the HRC. “Champaign also scored above the average of the nine cities in Illinois that we rated, which was 68.”

In the annual report, cities are given a score out of 100 based on criteria evaluating citywide resources, protections and services.

“A small amount of those (changes in) points is due to changes that we have in our scorecard year to year based on the legal landscape changing, and items being added and taken away,” Persad said.

While Champaign scored higher than both the state and national averages in the report, Persad said there are still areas in which the city could improve.

“It looks like Champaign isn’t getting credit for … appointing an LGBTQ liaison in the police department, and offering services to particularly vulnerable members of the LGBTQ community,” he said. “Like LGBTQ youth, LGBTQ homeless individuals, LGBTQ elders, people living with HIV or AIDS.”

Champaign also doesn’t have transgender-inclusive healthcare benefits, Persad said, which would offer city employees the option of at least one healthcare plan that is “fully inclusive of transition-related services.”