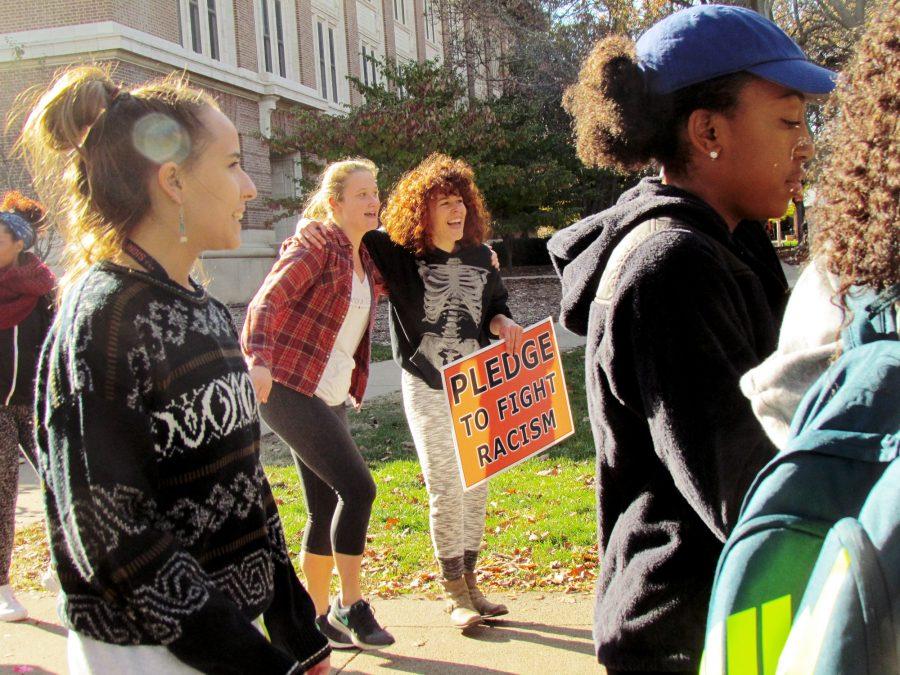 Line of students holding hands on the edge of the Quad.

After what some have called the most divisive election in recent memory, students across campus acknowledged Donald J. Trump as the next U.S. president.

For some residents of Champaign County, 55 percent of whom voted for Hillary Clinton, these results came as a shock.

“I’m still like pretty dumbfounded to be completely honest,” said Jordan McCoy, junior in LAS. “It just opened my eyes to like a lot of things that happen in this country.”

Kurby Velez, a graduate student in Social Work, was surprised with the outcome, but understands the different reactions people are having.

A group of students lined the Main Quad on Wednesday afternoon in solidarity. Some held anti-Trump signs and others held Young Women’s Christian Association signs, but one thing was important, they all held each other’s hands.

Xuxa Rodriguez, a graduate student in FAA, started the event for students to come and join hands together if they needed to.

“I expected it to be just a few of my friends coming out every once in awhile,” Rodriguez said.  “I did not actually expect it to reach the line that it has now.”

Students chanting “Keep Loving, Keep Fighting” started the event. Passersby were invited to walk through the tunnel of chants to clap, dance and smile.

The number of students grew and the line was soon joined by YWCA members. YWCA Executive Director Andrea Rundell said they attended the stand to show support for Rodriguez.

“We’re supposed to be here together, standing together, and that’s a big part of YWCA’s mission — to empower women and eliminate racism,” Rundell said.

Notably, the line was not intended to be anti-Trump, Rodriguez said. She encouraged students to reflect on whatever they felt.

“A lot of what has happened in this election was so much hatred and it’s been made okay,” Rundell said. “Those of us on the right side of history are making our voices louder.”

Over 100 students of different races, ethnicities and cultures participated in the line.

Music and chants continued past 2 p.m., when Rodriguez expected it to be over.

“I hope people realize they have friends next to them, and they have people they can come to when they need support and a community,” Rodriguez said.

Later in afternoon, a Trump supporter waving the American flag clashed with a large group of students.

Chancellor Robert Jones sent out a massmail to the student body early Wednesday evening acknowledging the conflicting emotions on campus.

“We have a chance to take a breath, look around and remind ourselves that we are a community defined by how we treat one another and by our willingness to focus on how we move forward together,” Jones wrote. “We don’t have to agree with each other to respect one another. We don’t have to be friends to work together toward a better future.”

“We are in this together.”

A previous version of this article said Xuxa Rodriguez was a graduate student in LAS.