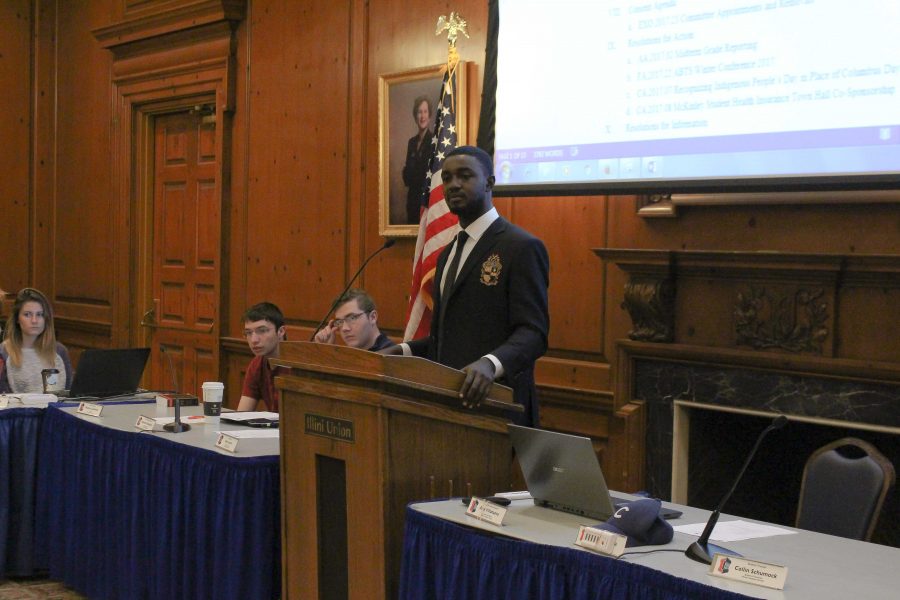 Each new assembly of the Illinois Student Senate receives a budget to help organize its spending for campaigns and fundraisers across campus. Usually, there is enough money to fund campaigns comfortably throughout the year. But this year’s assembly has deviated from its spending plan.

The senate has allocated two-thirds, or $24,650.88, of its $39,000 allocation from the Chancellor’s office for the year with five months left on their term.

But the 12th Assembly’s rollover funds helped this year’s assembly stay on target by raising the 13th Assembly’s budget to total $51,196.24. The senate has $26,545.36 left in its account after allocations.

Sam Braganca, student senate treasurer and sophomore in Business, explained that each new assembly typically receives rollover funding that is added to the budget for the next year, but it includes fixed amounts that are pre-allocated for certain events and campaigns.

But this year, the student senate has had to curb their spending so that it has enough money to fund campaigns in the coming months.

“From looking at past budgets, we are spending a lot quicker than we usually do. That’s been a cause of concern. So we’ve sort of slammed on the brakes there,” Braganca said. “We’re trying to ease up a little bit so that we don’t run out of all our money because we’ve already allocated over half. Which is, as far as I can see, unprecedented.”

In the Pre-Packet released about the student senate meeting on Oct. 26, Braganca had announced that thus far, the Senate has allocated $24,650 and spent about two-thirds of their budget. He also stated that he would release a quarterly budget.

“We funded that all in one block sum this year instead of smaller increments,” he said. “So we have been spending quicker, but also, there’s less stuff down the road that we’re going to have to pay for.”

In contrast, last year’s 12th Assembly encountered a positive influx for its budget during the second half of the Assembly.

In its Spring Financial Budget Report of 2016, in its Statement of Balance, it revealed that while the 12th Assembly started with $51,230.76, the second half of the 12th Assembly had seen spending (allocations and disbursements in tandem) increase markedly from the previous period.

“While I encourage senators and committee members to think of innovative ways to spend money on projects, it is likely that the 12th assembly will see a rollover of almost double its previous year,” said Rahul Kalluri, the 12th Assembly student senate treasurer, in the statement.

Another complication is the impact of the state budget impasse on the University. This, in turn, has an effect on the spending abilities of the student senate.

“We have been affected a little bit,” Braganca said. “It makes it harder to spend money because we have to jump through a few more hoops.”

The majority of money is spent on outreach campaigns; the two biggest are Quad Day and the “It’s On Us” campaign.

“(For) our campaigns, the rule that we have is that it has to be accessible to any student,” Braganca said.

With that mindset, on Quad Day, the student senate offers students the chance to rent an i-clicker for free for the academic year. The senate spent $5,838.54 solely on the i-clickers.

This is also the student senate’s third year of being involved with the “It’s On Us” campaign. Braganca said that the University is the number one school for pledges, so the student senate does focus a large portion of their budget on the campaign to keep it going.

Though there were large allocations for some campaigns, sometimes not all of the money is spent. For example, $1,240 was allocated for National Coming Out Dawy but $251.30 was spent.

“Generally, when there is a discrepancy between what is allocated and what is spent, it is because not all the money ends up being needed,” Mark Schaer, the student senate press secretary, said. “Sometimes resolutions include a small amount of extra money just to be sure the event or project can be completed, but often times, this goes unspent and goes back into our budget.”

(An in-depth breakdown of the senate’s budget can be found here. )

“We spend a lot of little amounts on like, forums. We have some money allocated for town halls where senators get to meet with their constituents,” Braganca said. “There’s a very diverse group of things that we spend our money on. But predominantly, it’s the major outreach campaigns.”

With fewer large campaigns to fund later on in the year, Braganca said that the Senate from now on would take careful consideration into what they invest money into.

“Senators have just been a lot more careful about what they spend on. So I talked to the body a few weeks ago and said that we need to distinguish between good causes and great causes,” Braganca said. “We get so many good causes in front of us that we can’t fund them all. So we have to be a little discerning and only fund the things that we can make great.”