To measure a major, look beyond enrollment numbers 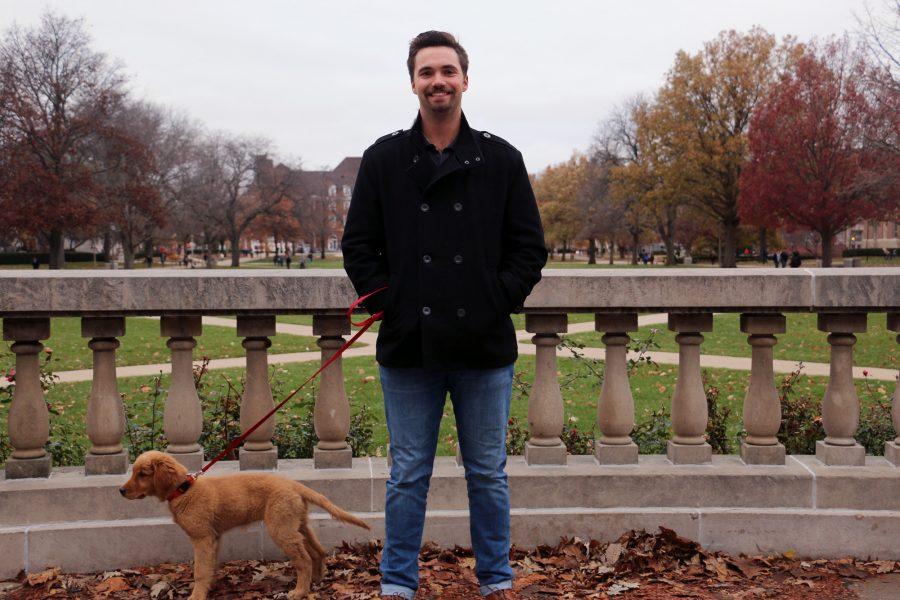 Kirk Halverson, the only student majoring in the teaching of Latin, stands on the Main Quad on Wednesday.

Kirk Halverson ranks at the top of his class — and at the bottom.

He is the only student at the University pursuing a bachelor’s degree in the teaching of Latin.

Halverson started as a mechanical engineering major and switched after his freshman year. He spent a good portion of that year doing math, realizing he didn’t want to do that for the rest of his life.

So, he registered for Latin classes because he enjoyed the four years he spent learning the language in high school.

But he didn’t know what he could do with the language until his University advisor told him he could always teach high schoolers Latin. He realized he found his new major.

“All the people I’ve worked with, the professors, are amazing,” he said. “They just know everything; it’s insane. You can just genuinely see how passionate they are about the material.”

Now a senior, Halverson is happy his decision, even though he’s the only one who made it.

Teaching of Latin is one of 17 programs at the University with 10 or fewer students majoring in it this year, according to data from the Division of Management Information, or the DMI.

The DMI records count only one degree per student, so double majors are excluded from the totals in the data. This year, there are 1,530 double majors, according to data from DMI.

Major enrollment came into focus last year when the state required universities to review its “low producing programs,” with number of degrees granted as the sole measure for production. The Illinois Board of Higher Education released its first report in June 2015 and identified the programs that awarded less than six baccalaureate degrees on average over the last five years.

For a full list of flagged undergraduate programs, go to dailyillini.com.

Biophysics was the only program cut after the report was released, and administrators say it was already in the process of elimination and the report simply expedited it.

Provezis, who works on academic assessment, said the University will never use the report as the sole reason to close a program. It will likely become a component of mandatory reviews, but it is still unclear how it will be incorporated.

The number of students enrolled in those 17 programs pales in comparison to the 10 most populous departments. This year there are 1,414 undergraduates pursuing a degree in psychology, the largest degree program. In the tenth largest program, civil engineering, 757 students are pursuing an undergraduate degree, according to DMI records.

And as the University faces a $190 million budget shortfall and uncertainty about state funding, the University cuts what it can. Eliminating programs with few students may seem like an easy solution, but administrators say it’s not that simple.

“Higher education is a much different enterprise than most companies,” said Staci Provezis, assistant provost for assessment. “When people think of products, not as many people are buying — diet cherry Pepsi vanilla — just get rid of it. Here, there’s so many other things that are happening, so it becomes one of those things that’s really hard to explain to our external stakeholders.”

Another consideration for the University is while some departments have few graduates, they teach more students through general education courses. Plus, administrators say, cutting programs that already exist may not be as cost effective as people think.

“It’s a bit of a misnomer to say because your enrollment is small, it’s costing other kinds of resources,” said Kristi Kuntz, associate provost for academic programs and policies, and executive director of the Campus Center for Advising and Academic Services. “Those resources are already in play, and by taking that program off the books or whatever somebody might suggest, it actually doesn’t result in any kind of savings or freeing up of resources for that.”

The administration cannot simply cut programs, as the addition and subtraction of degrees must filter through the department, college, the academic senate and ultimately the Board of Trustees. But the administration does encourage departments to respond to changes, including those in the job market.

Science, technology, engineering and math, or STEM, programs have dominated enrollment statistics since at least 2006 as the gap between the disciplines and others have widened. In the last 10 years, students began to turn away from liberal arts majors and instead major in math and science based areas.

These changes mirror national trends. The percentage of bachelor’s degrees awarded in the humanities dropped from 12 percent in 2007 to about 10 percent in 2013 before falling to 6.1 percent in 2014, according to research from the American Academy of Arts and Sciences.

Alan Mette, director of the School of Art + Design, said in 2011 there was a “major shift” away from studio based programs. One degree program that suffered was sculpture, which has two undergraduate students enrolled this year, according to DMI records.

Some of the school’s programs, such as photography, have started increasing to pre-recession numbers, Mette said, but they have not entirely bounced back.

“Part of this is fear of parents, too, in terms of them not wanting their child to be living in their basement in the future,” Mette said. “They think this is an expense entry to come to the University of Illinois for a college of education. We take that real seriously.”

The School of Art + Design has amped up its recruitment efforts with some success. It enrolled 155 freshmen this year compared to 108 last year, Mette said.

Other departments are adjusting their recruiting strategies, too. Jennifer Anderson Bliss, comparative and world literature’s new undergraduate advisor, does not sense any pressure from the outside, but feels internal pressure to “stop the hemorrhaging” of the number of majors and “build up.”

She thinks the comparative and world literature program has suffered because it has hardly been advertised.

Antoinette Martin stumbled upon the program when she wanted to switch majors freshman year. She was majoring in Russian Literature and realized she did not want to focus on one language, and she wanted a broader education. When Martin found the program on the University’s list of majors, she knew it could be a perfect match.

“It’s kind of broad, you get to pick and choose what you like to study within what the courses allow,” Martin, now a junior, said. “So whatever’s interesting me at the time, I can take, which is really helpful.”

Martin is one of just seven students majoring in comparative literature. The degree is similar to English, one of the most popular programs.

Despite the decrease, Karen Carney, associate dean of LAS, credits the English department for teaching rhetoric, a general education requirement, to a large swath of undergraduate students. And English is just one among many departments that reach more than its own students.

More than a major

Humanities courses often teach more students than just those pursuing humanities degrees since they fulfill general education requirements. To some professors, the total number of students a program teaches is more important than the number of students majoring in that program.

Michael Finke, head of slavic studies, is one of those professors. In his department, students take GedEd courses in the topic but don’t major in it. Other students, take slavic language classes but may major in something else like political science, or business, he said.

“You have to realize, too, that majors and minors aren’t the only way a unit serves the University,” he said. “So the number of majors you graduate doesn’t really tell the story of whether you’re pulling your weight as a unit at the University.”

Eleonora Stoppino, Italian undergraduate advisor, values the small program’s size. There are three majors, according to DMI enrollment records, but there are more double majors.

She said the size allows the professors to know their students “really well.”

Emanuel Rota, associate Italian professor, compares it to artisanal size versus industrial size. He said mass production was favored for a long time at American universities, but now people are increasingly interested in the “artisanal,” or the quality size of things.

“I think that’s what we are a little bit,” he said. “We are not a gigantic Kraft factory, we are literally a kind of fantastic small restaurant you go to because the experience is going to be with you for awhile.”

Some programs require small sizes. Ariana Traill served as the teaching of Latin department head since 2004 before stepping down in August. She said the program can enroll only three students at maximum to support observations with a local Latin teacher and practicum placements in Chicago.

Halverson enjoys the experience of being the only undergrad studying teaching of latin.

“(Humanities are) where higher education came from, and they’re completely important because they set the foundation for everything else,” he said. “They’re truly about the human experience. You can’t rank any one humanity over the other. You can’t rank one over the other just because of what the job market says.”

The popularity of programs can fluctuate.

“Who could have envisioned the centrality of Arabic studies now to a lot of what we do?” Carney said.

The Arabic Studies minor was almost nonexistent 15 years ago, she said, associate dean of LAS, but has grown with changes and conflict in the Middle East.

“If 20 years ago someone had said, ‘do you really need Arabic studies?’ And you’re like, ‘yeah, you’re right. We don’t need to teach Arabic studies anymore. Who’s going to use this?’ she said. “You don’t always have a way of predicting which disciplines are going to be really central.”

Enrollment in popular programs may change with the job market and global affairs. For now, some majors may be lonely, but they are here to stay.