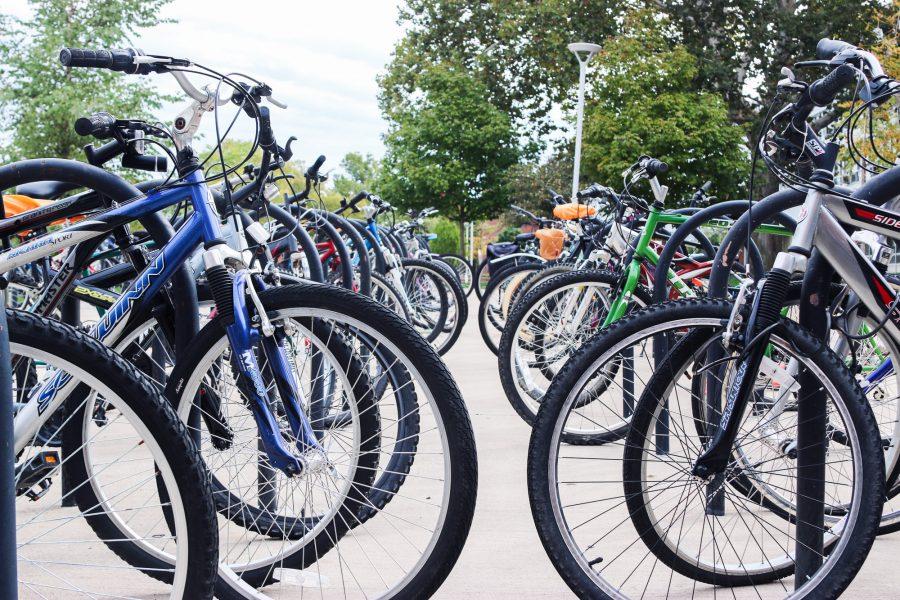 Bicycles are locked up outside Hopkins Hall on October 19th, 2016.

Bicyclists will soon have an easier time finding places to lock up. The University is adding 1,000 spaces of bike parking around campus.

Renovations to improve bike safety and convenience are underway and will continue through next semester. Facilities and Services is adding U-shaped racks that create room for about two bikes to be locked in place in the same spot.

“The new racks will make it easy for cyclists to lock both wheels and the frame to the bicycle rack using a u-lock and cable,” Lily Wilcock, a coordinator at Facilities and Services, said in an email. It was made possible through funding provided by the Student Sustainability Committee in hopes that more convenient bike racks will promote bicycling and have a positive environmental impact.

“The proposal is an example of a project that fits perfectly into our goal of giving back to the student body,” Paul Couston, president of the SSC said. “These bike racks increase the incentive to bike to class by faculty and students, decreasing the potential carbon footprint and as well as contributing to a more sustainable campus culture.”

Facilities and Services looked for funding to make campus more bicycle friendly for years when the SSC offered the grant for improvements.

In October 2014, there were close to 5,500 bikes on the campus. The most recent census from the Campus Bike Center said there were 2,600 bicycles; but there were fewer volunteers to count them this year, so Wilcock thinks there are probably closer to 4,500.

Students are required to register their bikes online, which makes it easier to both find and return stolen bikes and to plan better for future renovations on bike additions, according to the Facilities and Services website. In addition, Champaign County provides resources that can help students learn to properly lock their bikes.

The bike racks will be placed outside of over 20 facilities, including some more populous areas such as the Main Library.

The University was recognized as a bronze level Bicycle Friendly University in 2011 by the League of American Bicyclists for its support of the bicycle community, which was a key part of the University keeping its bicycle friendly environment.

The University is trying to promote a good environment for bikers, but there are some areas on campus that could still use renovations, Joseph Borrelli, a freshman in Engineering, said.

During the renovations students will have other places to place their bikes, but each location will be marked with construction signs ahead of the work schedule.

“The biggest benefit is convenience,” said Alex Bryk, freshman in LAS. “There are a few buildings that don’t have bike racks close to them, but now the bikers won’t have to worry about searching for them when they reach their destination.”