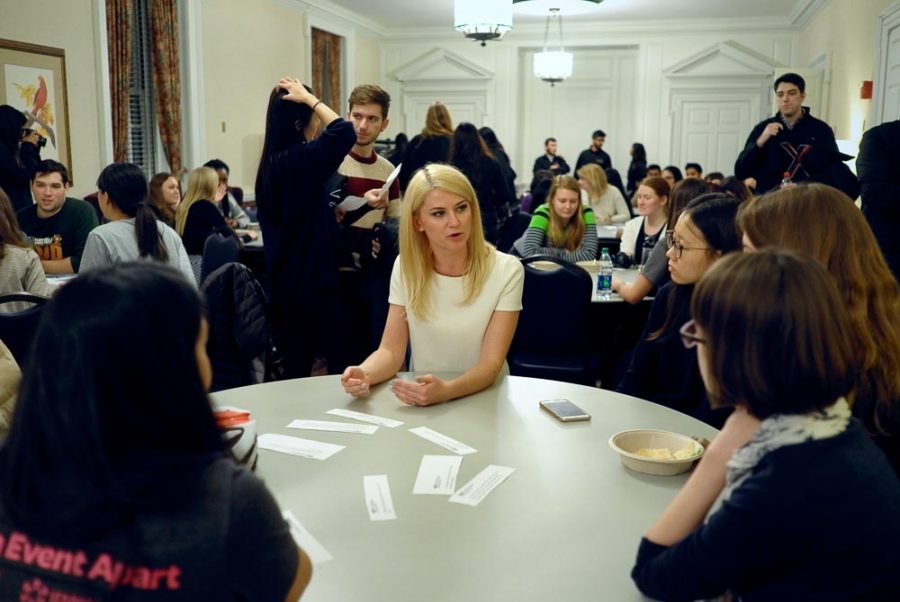 Kalina Borkiewicz, an engineer at the National Center for Supercomputing Applications, having conversation with students during the TEDxUIUC Salon: Women in STEM on Monday night, Dec.1st.

TEDxUIUC, a local chapter of the national conference, hosted its first salon, a scaled-down event in the Illini Union. Organizers hosted the Dec. 1 salon on women in STEM in preparationfor a larger spring launch.

Claudia Morawa, TEDxUIUC marketing team member and AHS sophomore, said the organization is considering  professors to speak in the spring. They only chose student speakers were chosen for the fall semester.

“I knew I wanted to incorporate MakerGirl in the speech because that is what I am representing tonight,” Berg said in an email before her talk. “But I also did want to talk about the importance of 3D printing and why teaching it to the younger generation, especially girls is so important.”

Kalina Borkiewicz, a University visualization programmer, told her story of the struggle in choosing between being labeled as a “woman engineer” or an “engineer.”

After confiding in a high school teacher, Borkiewicz began embracing the label of “woman.” “I had little in common with this tattooed man twice my age, but I could relate to him for a single reason: neither of us could fit the stereotype.”

After understanding that most people do not fit the stereotypical definition of their fields, Borkiewicz had a realization.

“If it wasn’t for my tattooed teacher just being who he was, just doing his job, but not hiding what it is that made him different, I don’t think I’d have the courage to be a woman in STEM today,” Borkiewicz added.

By embracing being  a woman engineer, she hopes to inspire other girls.

Chamila Amithirigala, said 46 percent of this year’s computer science majors were female, a welcome advancement. She also said she struggles with Imposter Syndrome.

“Imposter Syndrome is where people internalize their accomplishments and have a fear of being exposed as a fraud,” Amithirigala said.

Amithirigala’s family encouraged her to pursue scientific fields, never thinking a woman could do less.As an undergraduate student at the University, Amithirigala experienced her first of sexism in STEM after a male classmate told her she got in solely because she was a woman.

She suggested for those dealing with Imposter Syndrome to rely on passion and  to look for a mentor to follow. With those two steps, she was able to overcome her internal struggles.

A previous version of this article incorrectly referred to Kalina Borkiewicz as a graduate student. She is a University visualization programmer.