Conservation technician retires after 63-year career at the University 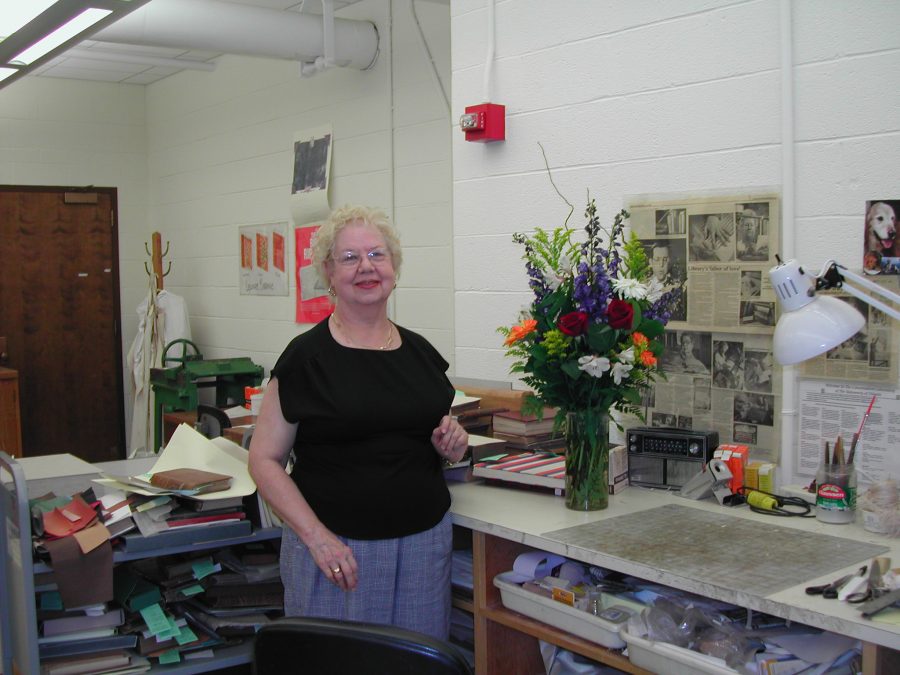 A lot has changed since 1953, especially for Jane Gammon who retired from the University in August after a 63-year career in the University libraries.

“It was a paper society when I first started,” Gammon said with a laugh, referring to the fact that the department works mostly on computers now.

Gammon worked for the University Library’s Conservation Unit, operating over the years as a clerk, manager, teacher and conservation technician in the general collections conservation.

Gammon and her family moved to Champaign from Mount Vernon in Southern Illinois in 1953.

Just one year out of high school, Gammon started as a clerk in the book binding preparation department at the University. Three years later, Gammon transferred over to the then-called “mending section,” which is now a part of the University’s modern-day conservation unit.

She quickly became a manager in this department.

For her entire adult life, Gammon had a passion for book preservation and conservation. Aside from working in these departments at University libraries, she belonged to various book conservation organizations.

“[I joined the] Guild of Book Workers in the ‘60s, a book art group interested in all aspects of books, making and repairing them,” Gammon said.

She also belonged to a sub-speciality “Book and Paper” group as a part of the American Institute for Conservation of Historic and Artistic Works in the late ‘60s.

“I’ve been a part of the process since the beginning in learning the bookbinding field and starting to upgrade the techniques of repair in our mending divisions,” Gammon said. “Over the years, I kept learning the field. No one had standards when we started, but later some people have credentials. I didn’t graduate from library school, but others have degrees.”

Gammon received her associate’s degree from Parkland College in 1974.

“I wasn’t ready to go to college [when we moved to Champaign] and I didn’t have the money,” she said. “I still needed a credit or two for college. I was working full-time and didn’t have the time.”

Gammon’s supervisor and head of preservation services for the University library, Jennifer Teper, does not believe that the lack of a bachelor’s degree hindered Gammon’s performance or success.

“Jane has been great, obviously, she has a host memory of conservation,” Teper said. “She was the person to give me a lot of background and history on the program, and why things were the way they were. She offered lots of moving-forward perspective.”

“Some professional libraries brought their problems to me,” Gammon said. “Word spread, so more and more materials were brought to me. I know the conservation field as well as people graduating from [library] training programs.”

Over the years, Gammon developed and introduced two different technologies to conserve books: deacidification and encapsulation. Both of these technologies involve using chemicals to restore books to a safer and more protected condition where they will not disintegrate.

Gammon attributes her technologies to trial and error with various book conservation methods. She attended about 12 national meetings that discussed different library problems.

“I’ve kept up with this field with my own time and my own money, receiving little support in attending conferences from the University library,” she said.

Along with working on the preservation and conservation of books, Gammon worked with undergraduate and graduate students, teaching them her techniques and more.

Jody Waitzman, conservation technician at the University’s conservation unit, was one of Gammon’s students in 2005, and they have worked together for the past eleven years.

“She has lots of knowledge, she could always pull out her files and put things in a different context,” Waitzman said. “It’s a really collaborative environment in our lab, we’re always asking questions and looking at each other’s work.”

Gammon not only enjoyed her work, but the people she worked with.

“Jane was always really great at organizing holiday parties and stuff like that.” Waitzman said. “She loved to bake and loved to have coffee and cupcake party for peoples’ birthdays. She was always looking for something to celebrate.”

Now, Gammon is setting out on writing her own history with conservation, a field that has grown with her.

Despite working in the same field for many years, one with fluctuating University support, Gammon continued being a dedicated staff person, Teper said. For all her years, Gammon voiced her support for the books she worked with.

“She deserves a great deal of respect and accolades,” Teper said. “Where we are in conservation now has a lot to do with Jane’s perseverance and dedication. We wouldn’t be where we are today without her and the work she has done.”