Top 10 moments of the semester 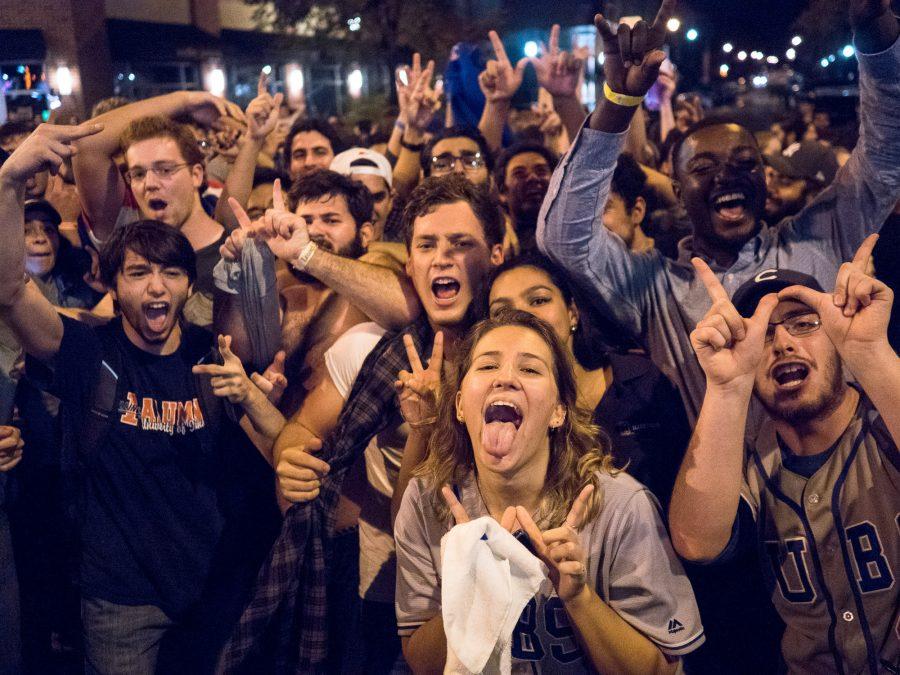 Students celebrate after the Cubs win Game 7 of the 2016 World Series against the Cleveland Indians on Wednesday, November 2 on Green Street at the University of Illinois at Urbana- Champaign.

As the semester dwindles and winter break approaches, have a look back at some of the key events that occurred at the University this fall. Below is a compiled list of some of the most impactful or ground-breaking occurrences on campus.

On Nov. 2, the Cubs made history when they won the seventh game of the 2016 World Series. They defeated the Cleveland Indians by a single run, 8-7, at the Progressive Field in Cleveland, making it their first World Series victory in 108 years.

Campus bars were crowded, residency halls held watch parties and students gathered to witness a historic night. When they won, people swarmed Green Street to express their excitement and overwhelming emotions. The campus was in celebratory pandemonium, unlike anything that had ever been seen at the University before (or at least, in a very long time).

On Nov. 9, campus, like the nation, awaited the results of the 2016 presidential election. After a very close race, Donald Trump proved victorious, with 306 electoral votes, as opposed to Hillary Clinton’s 232. Most of the campus community, however, did not take the news lightly. Students and teachers alike were angry and emotional at the outcome. People were genuinely scared for their lives, resulting in many classrooms becoming safe spaces. A protest down Green Street became a medium for voicing concerns.

“A crowd of about 75 people gathered by the Alma Mater at Wright and Green streets. They began by passing a megaphone and giving messages of varying tone. Some were scared. Some were terrified. Some tried to unify the group with positive messages. But most came in solidarity with one message to share: Donald Trump is ‘not my president.’

3. Shooting on Green Street results in one death and five injuries

On Sept. 25, a fight erupted outside of an apartment party, resulting in a gun being pulled and fired, killing one, George Korchev, a non-University student, and injuring five. The suspect, Robbie Paton, an 18-year-old who was not affiliated with the University, was charged with first-degree murder for Korchev’s death. There were two separate shootings that morning. The campus reacted in panic and a student, Kathryn Lawlor, witnessed the shots fired.

“Our campus community is a strong one, and our thoughts are with the victims, their families and anyone else affected by this violence,” said Renee Romano, the vice chancellor for Student Affairs.

On Oct. 11, President of the Illini Republicans Chris Piper sent out an email to the members of the political club entitled “You Decide if I Step Down.” After reviewing the emails he received, Piper resigned on Oct. 12.

“My ego is not big enough to hold a leadership position in an organization whose membership no longer wants me to be a part of it,” he sent out in the mass email.

The controversy broke out when it was revealed that Piper had been holding club funds in a private bank account, meaning the treasurer could not access it.

“The fact that a self-proclaimed Republican would say anything negative about the Republican nomination in an election as critical as this one is mind boggling,” Charles Dochoff, a member of Illini Republicans, wrote.

Controversy erupted when it became known that the Illinois Student Senate had allocated two-thirds of its yearly funds in the fall semester alone. Usually, there is enough money to fund campaigns comfortably throughout the year. This year’s assembly has deviated from its spending plan.

The senate had allocated $24,650.88, of its $39,000, signifying that there wouldn’t be enough many left in the budget for the upcoming semester. However, the issues were repealed when the senate revealed that the 12th Assembly’s rollover funds helped this year’s assembly stay on target by raising the budget to $51,196.24, meaning the senate has $26,545.36 left in its account after allocations.

On Oct. 3, Robert Jones became the  University’s permanent chancellor. Jones made history, the first African-American chancellor at the University. His background in crop sciences also acquired him a tenured faculty position in the Department of Crop Sciences under the College of ACES.

Richard Turner, more commonly known as “Black Santa,” was a beloved member of the campus community. He was a 54-year-old homeless man living on Green Street, who brought joy to students and engaged them in conversations.

On Nov. 16, reports of Turner consuming alcohol and behaving illogically were reported to the police department. He had been weaving in and out of traffic, along with yelling at passersby.

When officials arrived on the scene, he fled, eventually being detained on the 600 block of South Sixth Street. Turner became unresponsive during the interaction with the police, and was pronounced dead before 10 a.m. that Wednesday morning.

Students filled with heavy hearts took to Facebook and Twitter to commemorate the life of Turner and pay their respects to the face that became known among the Illinois community.

The process of photosynthesis hadn’t changed for over 5,000 years, that is, before Professor Stephen Long and his team of postdoctoral researchers made a groundbreaking discovery when they found a way to genetically modify photosynthesis in tobacco crops as a means of increasing productivity. This discovery is said to have future monumental impacts on the economy, crops and the way genetically modified organisms are perceived.

Protests against the Dakota Access Pipeline had been ongoing for several months since the project was revealed. On Dec. 4, the Army Corps announced that the pipeline would be rerouted due to the previous unpopular decision to have it on Native American soil. For many students, it was not just a battle between the oil company and local citizens, but “a centuries long conflict between the government and indigenous people.” A victory rally was held next to the Alma Mater on Dec. 5.

After Trump’s presidential win became evident, Toby Beauchamp, a professor in the Gender and Women’s Studies department made a GoFundMe page as a way to help members of the transgender community change their legal names and gender.

In just 19 days, he acquired $23,620 out of his $24,500 goal. Since his campaign went viral, Beauchamp has received requests from people of all ages around the nation requesting his help.

“One of the ways trans people get some measure of protection is by having their correct name and gender in their identification documents,” Beauchamp said.

Beauchamp believes because the presidential administration is shifting, it is time to take action in helping others. He explained that this effort is not affiliated with his job. For him, advocating for transgender rights is a personal endeavor.