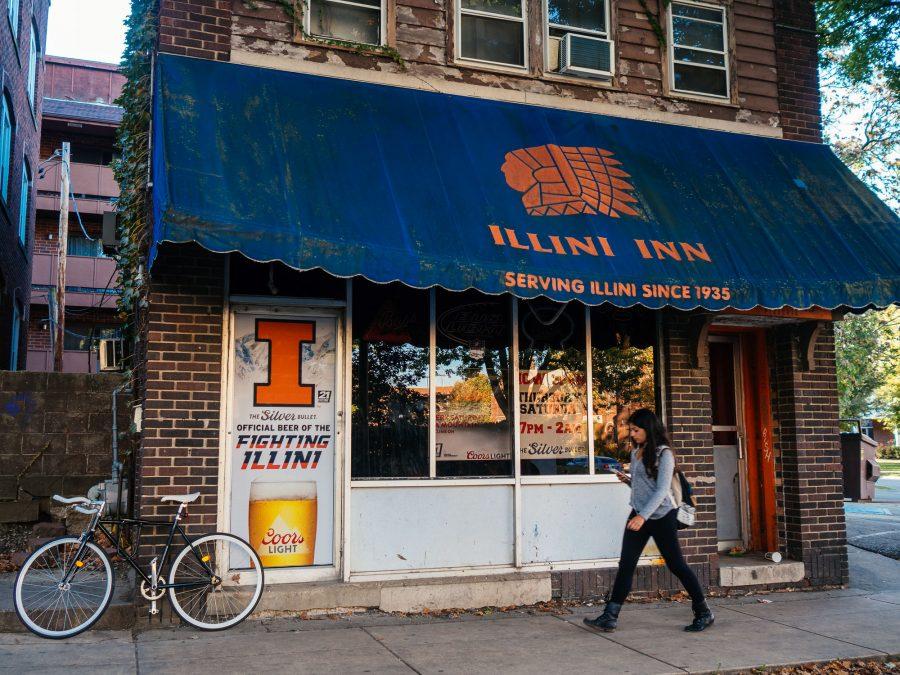 A student walks past the exterior of the Illini Inn, located on 4th St.

The fate of the Illini Inn building has been up in the air but changes may be coming as the Champaign County Zoning Board approved requests to increase the size of the lot for a proposed development at the current Illini Inn building. For now, the tavern remains open.

This is a crucial step for property owners Prime Housing, LLC’s  proposed mixed-used building at the 902 South Fourth Street lot. While currently operating, the future of Illini Inn remained unknown throughout much of 2016.

However, the legendary campus tavern won’t be gone for long. Prime Housing is seeking a Special Use Permit to reopen Illini Inn on the ground floor of the new building. The impending case will be considered by the Champaign Plan Commission and decided by the City Council.

“We are proud to keep the Illini Inn as a functioning element on campus. It has been at this location for eight one years and is a landmark for many visitors and returning alumni. While the physical portion of Illini Inn may be new, the traditions and history that make it special will remain,” developers said in their application.

RIP Illini Inn as we know it. https://t.co/uJ3STeAHzP Sincerely, 72098. pic.twitter.com/i7Uaex6cZR

Prime Housing noted original plans to keep the current Illini Inn structure intact and build around and possibly over the property. However, the building was deemed in unfit condition to retain.

In addition to the tavern, developers proposed ground level parking in the six-floor building. The remaining floors will be residential housing.

The zoning requests come as the current building was built prior to zoning regulations. In 1998, a Mitigation Plan was approved allowing Illini Inn and a since-closed second story Carry-Out/Delivery Pizza Shop to operate while not conforming to the 1996 Zoning Ordinance.

A tavern has operated on the ground-floor since 1960 under various owners and operators.