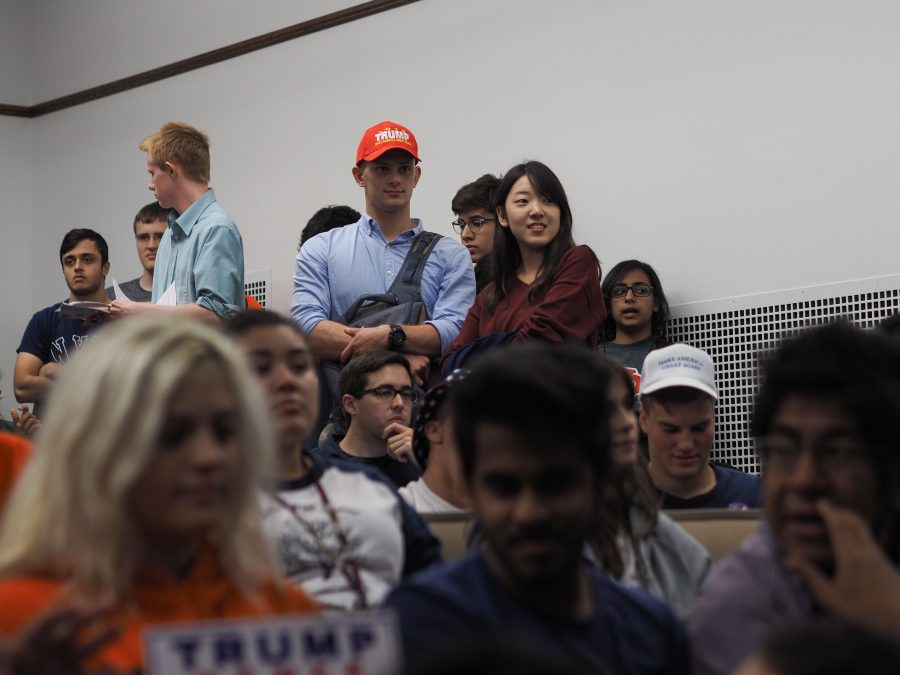 Students plan to gather to watch the Inauguration on Friday, Jan. 20th, just as they watched the Presidential election and Presidential debates this past fall.

On Jan. 20, Donald J. Trump will be inaugurated as the 45th president of the United States.

“I’m not going to lie we were all pretty much shocked with the results of the election” said Spencer Haydary, president of Illini Democrats, in an email. “But, I would say if anything, now it has inspired us.”

Haydary believes that the outcome of the election has led Democrats to rethink and revision the party as a whole.

“We need to get back in touch with the American people,” Haydary said. “Which is why this year we’re doing our part by focusing on what we can do on our campus. We’re going to focus on student advocacy, recruiting and retaining members at the University, and bettering the Champaign-Urbana area community.”

“We have a lot of potential to work together to promote our ideals and start conversation across the nation,” said Tayven Urbanc, freshman in DGS and Social Director of Illini Republicans.

Not only does Urbanc see a brighter future in the Republican Party in the country, but also on campus, in light of controversies within Illini Republicans last semester.

“We’re starting with a clean slate and we’re coming together to work as one,” Urbanc said.

Both Illini Progressives and Illini Democrats also plan to work as one but with a different agenda.

“We have a lot of work to do,” said Richard Daniels in an email, senior in music and president of Illini Progressives. “There’s no better time for a leftist uprising.”

Daniels feels that the issue progressives need to address lies in how Trump got elected.

“It’s really a lot simpler than you would think: You had someone (Trump) with a populist message who tapped into, and took advantage of, an angry right-wing populace,” he said. “Voters were forced to pick between him and someone (Clinton) who has been demonized by the public ever since she was in the public eye, and ended up being one of the weakest candidates with the weakest message and campaign in history. It was her refusal to tap into the left-wing populous that lost her the election.”

Daniels hopes to spread this message, along with other progressive ideals, this semester through collaboration with government organizations and flyering to recruit new members.

While Daniels does not see Trump affecting “most liberal campuses like ours,” he is concerned that a Trump Administration could lead to an increase in discrimination.

Haydary said he witnesses the negative feelings Illini Democrats have toward Trump.

“There is nothing we can do now to change the outcome of the election, but we can certainly fight him on any discriminatory and restrictive policies pushed by his administration at all levels of government,” Haydary said.

While various protests, rallies and walks are planned on Inauguration Day in Washington D.C. and across the nation, no University group currently has any planned on campus.

“I’m a huge supporter of free speech and peaceful protest,” Urbanc said. “We think that Trump will help us promote free speech on college campuses. He will help us have more of a platform to promote our ideas at both a national and local level.”

Daniels believes that everyone has the right and should protest.

“The one problem I personally have with holding ‘Trump Protests’ is that they don’t hit the real causes of his election,” he said. “We should be holding protests against the DNC for blatantly favoring Clinton over Sanders and silencing progressive ideas. We should also be protesting media outlets for giving Trump billions of dollars in free airtime and spreading falsehoods about who to blame.”

Haydary believes that the election recovery process is still underway for Democrats.

“It was definitely a wake-up call that we needed to realize we have to steer the party back into the right direction,” Haydary said. “I can assure you that democrats at all levels are working to oppose discriminatory policies, and that we will win in 2020.”

While there has been a split in the Republican party on Trump’s favorability as president, Urbanc sees unity in the Illini Republicans.

“We’ve been able to come together to appreciate the victories across the nation,” Urbanc said.

To celebrate these victories and Inauguration Day, Illini Republicans is hosting an open discussion and get-together at Murphy’s Pub on Jan. 19 at 7 p.m.

“It’ll be a discussion of Trump’s cabinet picks so that we can get an idea of where everyone stands and what we think should happen in the first 100 days,” Urbanc said.