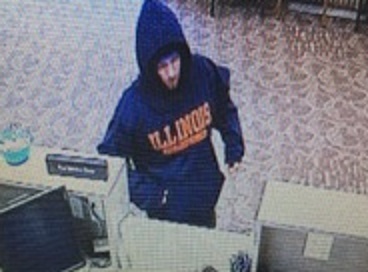 The alleged robber in a surveillance photo at Busey Bank in Champaign.

The Champaign Police Department made an arrest in one of two bank robberies that occurred last week. Thirty-year-old Jeremy Larson of Champaign turned himself in on Saturday. Detectives learned “about Larson’s whereabouts and his desire to turn himself in; and at approximately 7:04 AM arrested Larson in the 1200 block of S. Mattis Ave, without incident,” according to a press release.

The report said no weapon was implied or displayed, and no injuries were reported. Larson is being held for aggravated robbery.

A suspect entered the bank, jumped onto the counter, announced it was a robbery and demanded money, according to bank staff. The suspect was given an undetermined amount of currency and the suspect then fled on foot in a northerly direction.

During the robbery, the suspect had entered the bank and demanded money. The possession of a weapon was implied but not displayed during the bank robbery.

Champaign Police issued an arrest warrant today for the robbery. Meco K. Russell is wanted for  Aggravated Robbery. A bond on the warrant for his arrest has been set at $150,000.

Anyone with information is encouraged to call the Champaign Police Department Investigations Division at (217) 351-4545. Anonymous tips may also be submitted to Crime Stoppers by phone at (217) 373-8477 or online at www.373tips.com.

Crime Stoppers will pay a reward up to $1,000 for information leading to the arrest of the person(s) responsible for this crime.