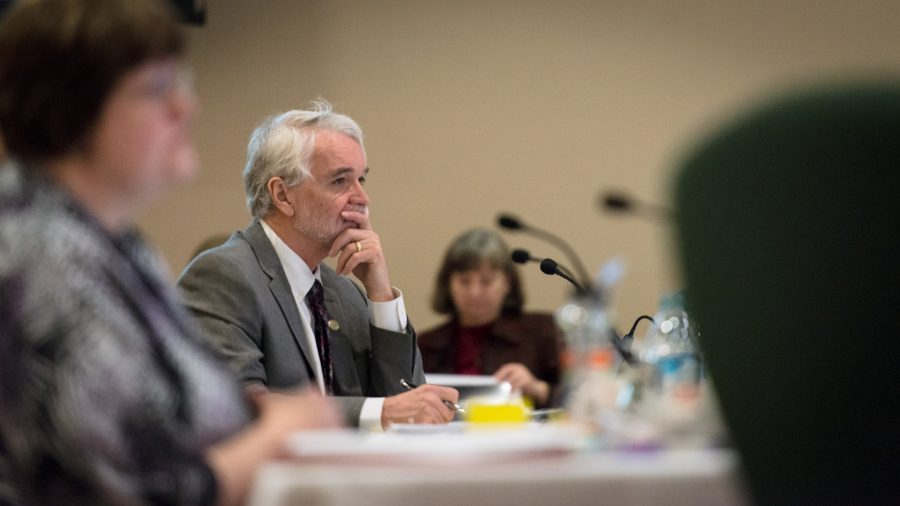 Board Administrators met on Monday to address Trumps Presidency.

The shift of power in Washington D.C. due to President Trump’s inauguration is cause for some concern at the University, as expressed at the Senate Executive Committee meeting Monday afternoon.

Mark Steinberg, chair of the academic freedom and tenure committee, asked President Timothy Killeen if the University had representatives in the circles of the White House, citing his concern that the University’s financial uncertainty is heavily affecting the retention of faculty.

“We are still getting a sense of who is representing the White House,” Killeen said. “We do have some connections in energy … we’re going to be very present in these conservations.”

George Francis, chair of the information technology committee, had similar sentiments regarding the future of the University.

“We are a very competitive university, very attractive to top talent and we want to preserve that,” Killeen said. “Both for the state where we have important contributions to make and globally as well.”

As President Donald Trump begins his presidency, the topic of immigration has remained at the forefront of public conversation. Petitions circulated to make the University a sanctuary campus for undocumented students after Trump was elected in November.

President Killeen responded with a massmail sent to campus, saying the University will not become a sanctuary because of the negative consequences it could bring, including the loss of federal funds.

Despite this, he said the University has been completing a lot of analysis of different options surrounding the issue.

“We’ve been looking at our undocumented student body, and been working to make sure all the right resources and approaches are in place to keep our students in the classrooms and in the libraries,” he said. “Every student is our student, and we want them to have unfettered access to education.”

The issue of healthcare for University faculty was also briefly discussed, given the possible repealing of the Affordable Care Act.

The Investment, Performance, and Accountability Commitment bill will be reintroduced to the Illinois Senate, and has been dubbed as Senate Bill 222.

President Timothy Killeen announced the bill in November, and it would guarantee the University state funding in exchange for meeting target metrics. Killeen worked with the state legislature’s U of I caucus to draft the bill.

The legislation aims to provide the University with reliable and predictable state funding for the next five years, instead of relying on stop-gap or unpredictable funding that has arisen from the state budget impasse that has lasted nearly two years.

However, Killeen said the University will likely get more than just stop-gap funding with the reintroduction of the bill.

Killeen said he’s hoping for at least an 18-month period of funding from the bill, though it aims to secure five years of funding.