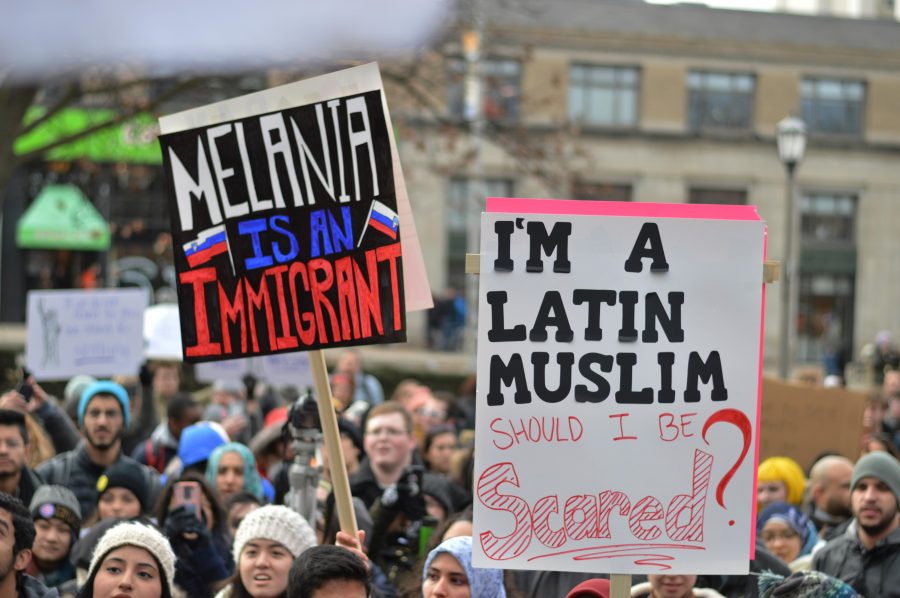 Many protesters gathered Monday afternoon on the Main Quad for a protest in opposition of President Trump’s recent executive order restricting travel to several Middle Eastern countries with Muslim majorities.

Hear the sounds of the protest as well as a conversation with LAS student and activist Muhammad Yousef about student protests and what’s next for activists on campus.

Speakers validated fellow Muslim students’ fear and anger. They also encouraged hope and reminded Muslim students that they should not need to prove their humanity or patriotism in order to be safe.

The event started at Anniversary Plaza, and protesters walked around the Main Quad to the English Building. They ended with a rally at the Alma Mater, adorned with a flag that read “RESIST.”

Co-sponsoring organizations included the Muslim Students Association, United Muslims and Minority Association, C-U Immigration Forum, Students for Justice in Palestine and the Campus Union for Trans Equality and Support, among multiple others.

“We should not have to wrap ourselves in that blood-stained, colonialist flag to be respected as human beings,” said Tariq Khan, a graduate student. “If this is going to be the shape that ‘Fight Trump’ resistance takes, then we’re screwed.”

Both Davis and Gov. Bruce Rauner’s contact information was distributed to attendees on a slip of paper. Speakers encouraged protesters to call their elected representatives and voice their concerns. Several times throughout the event, protesters chanted Davis’ phone number, (217)403-4690.

Some students personally affected by the executive order gave impromptu speeches after feeling inspired by others at the protest.

Bordbar left the U.S. to get married after four years in a long-distance relationship, Shahoei said. Both Shahoei and Bordbar are from Iran on visa in the U. S.

Bordbar was sent confirmation from the consulate in Dubai on Thursday that his visa to return to the U.S. and his studies was ready, but the recent executive order has left him unable to return the U.S.

“Please, call Rodney Davis today,” Shahoei said. “(Davis) mentioned, ‘Yeah the action is fine, and these people weren’t vetted enough … ’ I have been vetted more than almost anyone here.”

Sultan reminded protesters in her closing remarks of all of the co-sponsors and communities within the campus community that stand in solidarity with Muslim students.

She also encouraged people to attend an United Muslims and Minority Association panel-style event Wednesday on resistance to Trump’s presidency and future activism.

An earlier version of this article included a source who had wished to remain anonymous, but was included due to a miscommunication. The source has been removed from the article to keep their privacy.  Also, Shaman Tabe Bordbar’s name was misspelled. Rezvan Shahoei was listed as “Shanoei” on second mention.The Daily Illini apologizes for the errors.