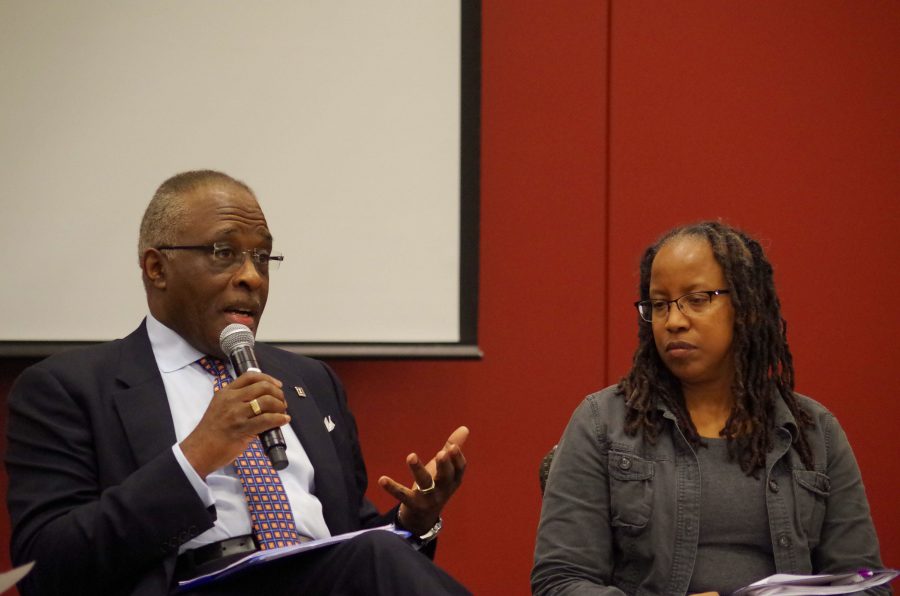 Chancellor Robert J. Jones along with other University Administrators are being active about informing students of President Donald Trump’s executive orders.

Chants could be heard through the window of the English Building. The shouts were muffled, but audible enough for members of the Senate Executive Committee (SEC) to turn their heads.

“I believe you can hear the rally outside right now,” said Rahul Raju, undergraduate student representative.

Chancellor Robert Jones said as soon as the University heard of the decision, which became active Friday evening, the University worked to identify students, faculty and staff affected by the ban, as well as determine their legal status. Then, the University researched legal counsel and identified steps to take in order to help those affected.

“There was a lot that was going on behind the scenes until I left my office five minutes ago to walk over here,” Jones said.

Kathryn Oberdeck, equal opportunity and inclusion chair, was also in attendance at the SEC meeting, though she has indicated her support for the Muslim Immigration and Refugee Ban Solidarity March.

During the meeting, she expressed her concern about a lack of collaboration between the student activist community and the University.

Raju also mentioned the petition denouncing Trump’s temporary ban that was introduced to the committee, asking if the University was willing to meet its demands.

Specifically, he asked if the University would supply affordable housing for students affected by the ban, in the case they lacked housing due to not being able to return to their home country.

However, Provost Edward Feser said the school was not aware of any students becoming stranded, yet. He said the University contacted all the students from the banned countries and encouraged them not to travel.

“An administrative working group is going to be responding to executive actions and other kinds of things that are disruptive to the climate and values we have at this University,” Jones said.

The University has set up a webpage devoted to the changes and aims to inform students of other likely changes that may arise.

While 143 students were identified as being from six of the seven countries that are apart of the ban, Feser said it’s much more difficult to gather numbers on faculty and staff.

Data collection is mixed, and faculty can claim their country of origin as the last country they lived in. For example, a professor may be a citizen of Iran, but declare their origin country as Canada because they lived there last. Dual citizenship also makes this number hard to solidify.

And Feser said the University is hesitant to ask faculty to self-identify.

“Identifying themselves could cause problems as well,” he said. “We’re watching the Trump administration — they might use social media as a part of their ‘extreme vetting process’ and we don’t want our faculty and staff to become examples. It’s an odd world we’re in.”

University Police Chief Jeff Christensen as well as Lt. Todd Short gave a presentation explaining emergency preparedness, but questions about community safety regarding the executive order came up as well.

It’s been a continued concern of the University that the Deferred Action for Childhood Arrivals would be overturned by the Trump administration, and President Killeen voiced his commitment to protecting undocumented students in a Massmail sent last week.

Christensen emphasized that in all his years working for Champaign County, the policy has never been to inquire as to one’s immigration status. Even if someone goes to jail, there is no notification to Immigration and Customs Enforcement (ICE).

Students, as well as some faculty, are also concerned about police and community relations under the new administration.

However, Short said that one of University of Illinois Police Department’s main values is defending constitutional rights.

In fact, prior to the Muslim Immigration and Refugee Ban Solidarity March that took place on the Quad, University Police had contacted the student organizers to see if they needed police assistance.

“The yelling we heard outside is what makes us special,” Short said. “But we also realize, walking around, every student has different experiences. So we have to realize what that history has been.”

Short said the department is aware that international students and students from more urban areas might have different perceptions of the police.

In regards to finding a replacement for Interim Provost Feser given his resignation, Jones said nominations continue to come in from faculty.

“We’re still on track to roll a decision out in the next week or so,” he said. Jones said he still needs to have a face-to-face conversation with two or three people before naming an interim provost.

He said the interim provost needs the ability to lead in this “very very critical moment” and “very uncertain, very unstable environment.”

The SEC also discussed a draft that outlines the procedures for forming a search committee to secure a permanent replacement for Feser.

After deliberating some changes and wording, the SEC approved the draft to be introduced to the entire senate.