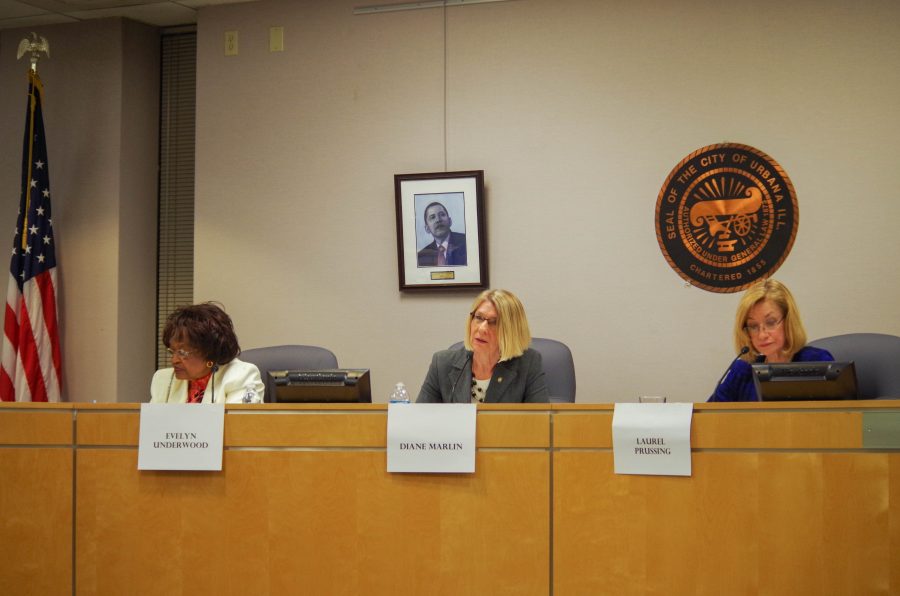 The mayoral debate for Urbana that took place at the Urbana City Council Chambers on Jan. 30. Marlin will be the next mayor of Urbana, defeating Rex Bradfield with 86.25 percent of the vote.

On Monday night, the League of Women Voters of Champaign County, along with the NAACP and the News Gazette, held a candidate forum for the mayoral candidates at the Urbana City Council Chamber.

After brief opening statements, each candidate was given a minute to answer audience questions, which were read by prompter Trisha Crowley.

“As mayor of Urbana, I worked with the city council to do what was seemingly impossible,” said Prussing in her opening statement. “Urbana cut the violent crime rate from 2014 to 2015. Has any other city done that? We achieved this through excellent teamwork, despite a recession.”

Marlin stressed economic development as a much needed change for the Urbana community.

“It’s time for change in Urbana,” she said in her opening statement. “Urbana lags behind economic growth to neighboring communities. Hundreds of jobs are leaving this city this year. New business openings are offset by those who have closed.”

A self-proclaimed outsider, Burnett focused on ways to bring in the community together to handle important issues.

“I am Urbana, in that I represent all that is good about Urbana,” Burnett said. “Educated here, raised my family, worked here, active in the community, helped family and friends who build business here.”

The debate focused on issues ranging from crime in Urbana to environmental concerns.

Prussing focused on the improvements Urbana has seen under her leadership, which include 115 new businesses and decreased crime. During the debate she addressed issues of poverty and homelessness in the community.

“There’s a growing realization that you start with housing and you go from there,” Prussing said. “Other communities have realized that it’s more difficult to deal with someone who’s on the street than to find suitable housing.”

Marlin said the city needs to re-evaluate its leadership organization in order to bring real change. She said the real way to decrease poverty and incarceration is to start with family services.

“If you’re going to help youth in this community, we need to do whatever we can in the city’s capacity to strengthen families,” Marlin said. “We need to think about taking the activities to where the children live and provide activities in the neighborhoods. The city can’t do it alone, but we can support it.”

Marlin said much of the issues facing the city are because of a disconnect between the government and the residents. Many of the people who need the most assistance from their government aren’t’ being heard.

“We as the leadership need to get in there and work with all people, all people,” she said. “We’ve got to deal with the real at risk [students].”