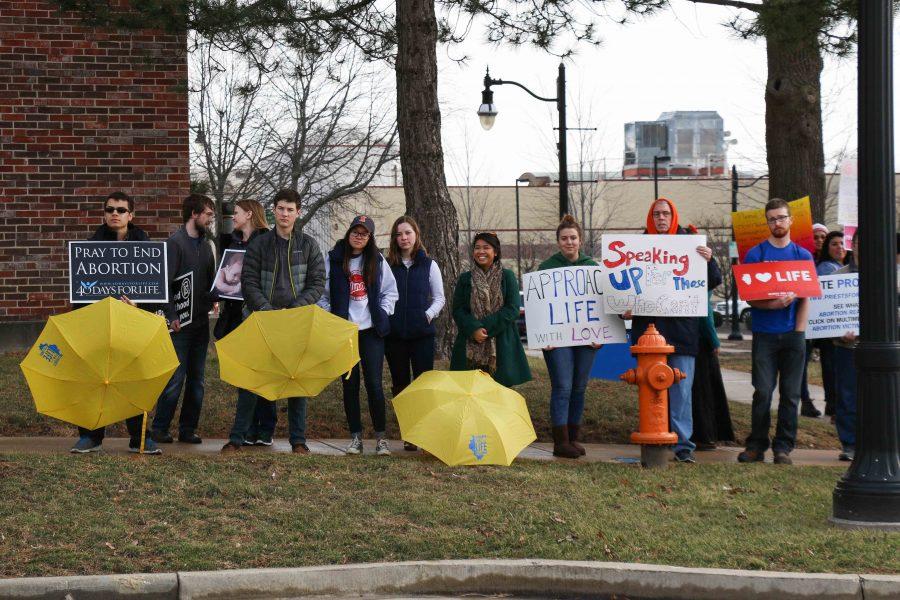 A group gathers to protest federal funding of Planned Parenthood on Saturday.

For the first time since the Roe v. Wade decision, nationwide  abortion rates are at an all-time low. Roe v. Wade, the Supreme Court ruling that determined a woman’s right to have an abortion, was passed in 1973.

Nearly 50 years later, this decision is still being debated, along with the reasons for the decline.

Sean Cashin, senior in Engineering and vice president of Illini Collegians for Life, attributes pro-life efforts to this decline.

“It makes me very happy that fewer women will have to go through that,” Cashin said. “Perhaps abortion restrictions that states have been passing are working.”

An estimated 926,200 abortions were performed in 2014, which is 12 percent lower than in 2011, according to the “Abortion Incidence and Service Availability In The United States” report conducted by the Guttmacher Institute.

However, Elisabeth Larson, senior in AHS and president of Advocates for Choice, said in an email that the efforts of the pro-life groups do not contribute to the decline in abortions.

“This report is proving what pro-choice advocates and patients have been saying for decades,” Larson said. “Increasing proper sexual education, making birth control accessible and affordable, and fighting any attempt to come between a patient and their health is creating an environment where abortion services are needed less.”

She said that when communities are provided information about reproductive health care, more people can use effective methods of contraception so abortions are not the only option available to them.

Illinois accounted for 4.6 percent of the country’s abortions, with an estimated total of 42,270.

Larson also attributes the difference in state numbers and national numbers to the fact that some states offer abortions and preventative health care while others do not.

“Illinois has and will continue to be a state that has fought hard for the rights of our patients to seek reproductive health services, and as a result, we happily accept patients from other states,” she said. “Because of the restrictive laws that are in place in other states, people who are in need of medical care are forced to travel across state lines to have access to safe, legal abortions.”

Between 2011 and 2014, there was a six percent decline in health care clinics offering abortions. The steepest decline was in the midwest with 22 percent.

Suzanne Trupin, doctor and CEO of Women’s Health Practice in Champaign, believes that abortions ought to be “safe, legal and rare.”

“The increased use of LARC, long-acting reversible contraception, has improved pregnancy protection,” Trupin said in an email.

The Women’s Health Practice in Champaign is a clinic that provides women with services like gynecology, obstetrics, abortion and infertility.

This rally was one of over 200 held across the nation to call on Congress to remove all federal funding for Planned Parenthood and relocate those funds to other health centers. The rally focused on defunding Planned Parenthood as it is the largest abortion provider.

“[The rally’s purpose is] to educate women and the general public on abortion and what Planned Parenthood really is and does,” Mullen said.

The rally featured pastors from local churches sharing remarks and prayers, along with speakers who have had abortions.

“Abortion is another example of society having deemed some individuals as less than humans,” Mullen said.

Despite their differing views, both Larson and Cashin still believe that there is a stigma surrounding abortion, especially on college campuses.

In order to encourage conversation on this issue, Illini Collegians for Life creates pro-life chalk writings on the Main Quad.

“[These are] positive, life-affirming messages to try and start conversations about the negative effects of abortion and the positive benefits of the gift of life,” Cashin said. “We always have pushback from the writing, while we’re writing it, the next day. Obviously, it’s not something a lot of people want to talk about.”

Trupin said conversations with her patients are beneficial.

“Clearing up misconceptions and being willing to have a dialogue is the way any medical service is less stigmatized not just restricted to abortion, but contraception, sterilization, and infertility services,” she said.

While Cashin believes that most people look the other way, there are confrontations, and Illini Collegians for Life strives to start conversations with students and make their case.

“We’re trying to be a group known for passion, not confrontation, for love, not anger,” Cashin said. “It’s not us against them. We’re all human beings, we’re all on the same side.”