U of I faculty release statement for Research, Diversity, and Freedom 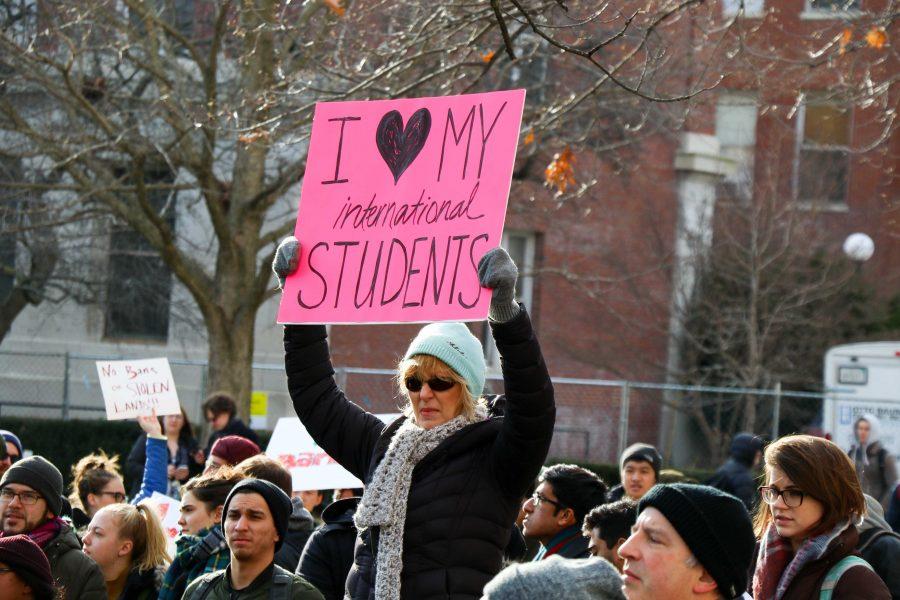 Protestors meet by the Illini Union to march on Monday, Jan. 30.

With recent national attacks on factual information and research, over 260 professors, lecturers, Ph.D. candidates and department leaders are responding by signing a petition to uphold values of “Research, Diversity and Freedom.”

The petition was released with a statement aiming to reaffirm the University’s “commitment to the core values of access and inclusion.” Those signing come from all three University of Illinois campuses and from departments in humanities, arts, social sciences and STEM fields.

The petition itself calls for signees to “reject every form of bigotry, discrimination, and hateful rhetoric and action,” as well as to endorse open, respectful dialogue and uphold “the principles of scientific method and of fact and reason-based inquiry.”

Susan Koshy, one of the organizers of the petition and an English professor from the Urbana-Champaign campus, said that faculty, postdoctoral scholars, researchers and graduate students can sign the petition.

The statement says it comes at a critical time and responds to the current political culture of “vitriol, fake news, and alternative facts that has imperiled core democratic institutions and values,” according to the statement.

Koshy said that while the statement does support free speech, it realizes “the multiple and complex ways in which speech is restricted in the current political climate.”

Recent political events have led to other college petitions as well, including one against the immigration ban executive order that has 264 signees from the Urbana campus.

“What affects some members of the community affects us all,” Koshy said. “In the wake of travel bans, virulent rhetoric and actions directed at marginalized groups, we have a responsibility to support those in our community who feel vulnerable.”

“Setting up barriers to these exchanges violates core American values and undermines the ability of universities to do their work,” Koshy said.

Emanuel Rota, another organizer of the petition and associate professor in the College of LAS, said that the petition deals with providing accurate information, and that, as researchers, it is crucial to democracy.

“If the number of immigrants or criminal activities are purposely misrepresented, or if the the data on climate change is hidden from the public, or if we have the intentional spreading of fake news by the administration, then the citizens cannot make informed political decisions. In the end, any attack on rational and accurate research is both against science and democracy,” Rota said.

Koshy said that the petition has had a strong response by the University and that working on the statement with other faculty members has been inspiring.

“We feel it has galvanized university communities to defend their core values,” Koshy said.