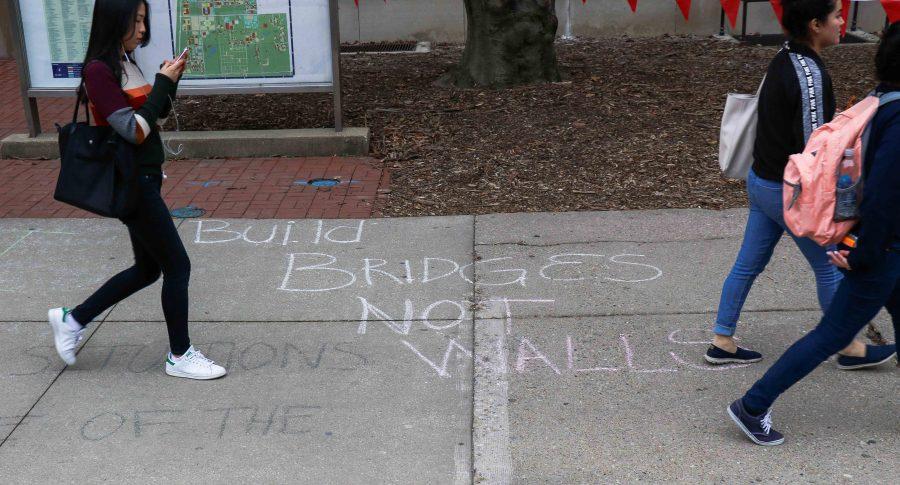 Chalk written on the Wright Street sidewalk in front of the Henry Administration Building on Thursday, Feb. 23.

Multiple chalking incidents around campus prompted a response from the University administration.

Monday night, students chalked messages in support of President Donald Trump in front of the Alma Mater as well as the Anniversary Plaza south of the Illini Union. Students contacted staff of the Illini Union around 10 p.m. because they felt the messages were explicit.

On Thursday morning, chalking was also reported in front of the Henry Administration Building facing Wright Street. Some of the messages ranged from “#WeBelong,” “migration is beautiful,” and “your silence will not protect students.” It is unclear if the two incidents are related or who wrote the messages.

In the massmail, the chalking incident was referenced in addition to past incidents that have happened on campus that prompted politically-charged student response. Anti-immigration chalking last April was called #TheChalking.

“This week we had chalking on the Quad.” the statement said. “The week before saw an Israeli flag defaced at a protest. Members of our Muslim community and students with uncertain immigration status have been harassed. And we’re seeing Unofficial T-shirts that many in our community view as insulting to Native Americans.”

The massmail said respectful discourse is valued, but even offensive speech is protected by the First Amendment, and everyone has the power how to exercise their rights of free speech and free expression.

“Universities like ours are places where controversial and sometimes divisive issues are considered and debated, “ the massmail said. “It is the role of higher education to address difficult topics, and it is often at the uncomfortable edges of challenging conversations where we make our greatest advances.”

“We are at our best when we engage in dialogue that encompasses the widest range of views and voices,” the massmail said. “We do not need to agree on every issue. But hopefully we can agree that showing respect and regard for those around us is always a choice we can make.”

On Monday, Dani Brown, freshman in FAA, saw posts online about the chalking and came to help wash it off.

“(My friend) got a message from the Illini Democrats Facebook group,” Brown said. “We immediately got off the bus and came out here with water bottles. There were 20 people here washing stuff off, at least.”

University police arrived on the scene at around 10:20 p.m. and allowed the students to wash off the chalk.

In an email, UIPD spokesman Patrick Wade said the chalking incident was not a law enforcement issue they would typically intervene in.

“We occasionally check out chalkings when we’re called to do so to ensure they do not contain any threatening messages,” Wade said. “Otherwise, chalking our campus sidewalks is not illegal, nor is washing it off. We just didn’t intervene in a situation where no one was doing anything illegal.”

The group Illini Republicans made a statement on their Facebook page denying that the organization had been responsible for the chalking after they received allegations.

On Thursday, the group released another statement saying it was not an official event of the group, citing that members did not make a Facebook event about the chalking.

“Facebook is the official platform for our events, and we always make an event page before we have one,” the statement said.

On the Illini Republican website, there were several powerpoint slides from a previous meeting that referenced a social at Murphy’s on President’s Day. Underneath it said, “Will be followed by chalking the Quad.”

The Illini Republicans said in an email, “The idea (chalking on the Quad) was suggested at the meeting … however if we had decided to do so as a club there would have been an official Facebook event made as well as regulations in regards to what could be written.”

“While many of our members were there (at the Union), there were more members from activist organizations who saw the chalking and took initiative before we even arrived,” the Illini Democrats said in a statement.

There have a been a series of photographs circulating on social media of some of the pro-Trump chalked messages. Many messages had been smeared out with water. Messages of opposition to the original chalking, such as “be confident be you” were written in the plaza later in the evening.