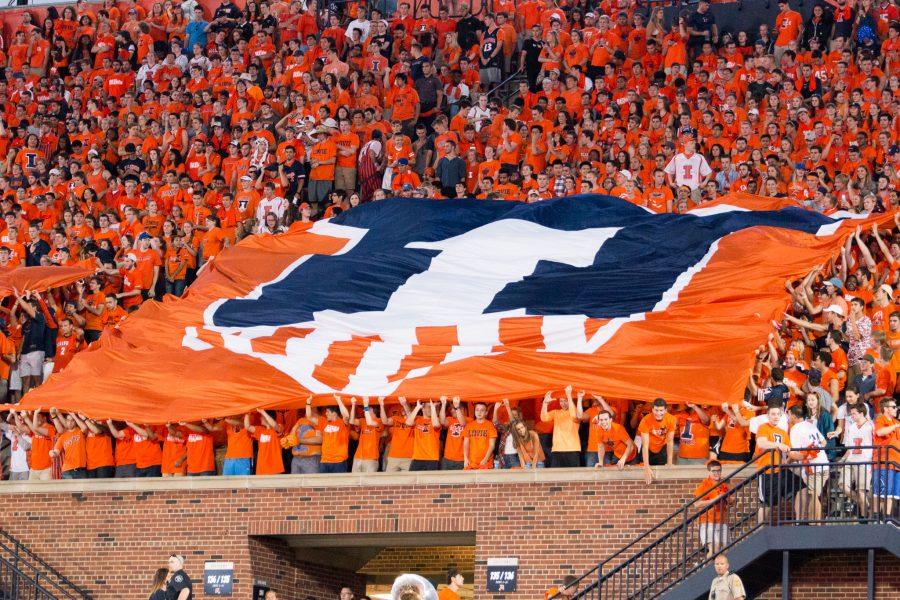 Students in the Block I student section hold up the Illini shield flag during the game against North Carolina at Memorial Stadium on Saturday, September 10.

Sassy the Squirrel and Abraham Lincoln are big names in the divisive debate over the new mascot to replace Chief Illiniwek.

But over 100 years ago, the students were torn over something that seems so integral and permanent to campus today: The two colors that represent the University.

“A great deal of uncertainty is felt as to what the University colors are,” an editor of The Illini, which was later renamed The Daily Illini, wrote in the Sept. 20, 1894 edition. “There has been, however, as can be learned, no official action on the part of University authorities.”

But in Nov. 1893, Dartmouth green was adopted by the Athletic Association to be worn by athletic teams. Prior to this decision, the association also used a black and yellow combination and a crimson and olive green one.

Meanwhile, the Alumni Association used gold and black or orange and black for many of their official functions.

It wasn’t until Wednesday afternoon on Oct. 24, 1894, that University President Andrew S. Draper announced the official colors that were chosen by a committee of students and faculty.

His announcement was made at convocation and then published in The Illini.

While there was speculation that the University decided against gold and black because of their popularity at other colleges throughout the Midwest, University Archivist William Maher said there are no records to match this claim.

Instead of overuse, Draper asserted that orange and navy blue were decided upon from “very careful consideration.”

“Blue is an emblem of steadfastness and stability,” Draper said. “Orange has come down to us through 200 years of history. It was the color under which the world’s first great battle for liberty was fought.”

It is likely that Draper is referencing the Battle of the Boyne, which was William of Orange’s defeat of the Catholic claimant to the English crown, along with James II’s Scottish and Irish supporters, Maher said.

“While what is said could be just a narrative constructed to explain what may have been merely a rationalization of colors that were already available, it also carries a WASPish nativist tone as to the selection of ‘orange,’” Maher wrote in an email.

In other words, because the Battle of Boyne signifies a Catholic defeat, Draper could’ve picked the color orange as someone that identified strongly as a protestant, especially during a time period when Catholics were heavily persecuted against as they continued to immigrant into the United States.

While the motivations for choosing the University’s colors may never be fully known, students still hail the orange and blue nearly 150 years later.