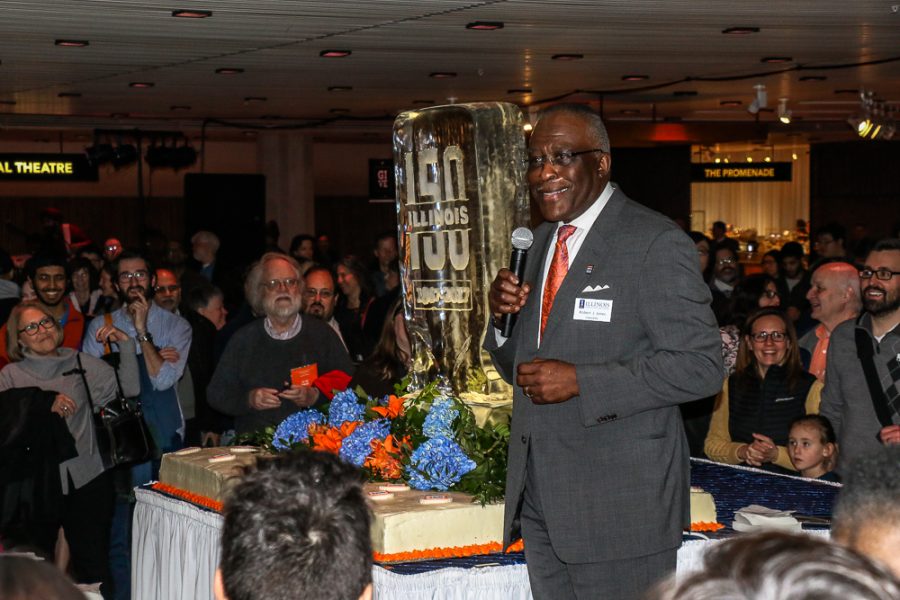 Chancellor Robert Jones talks to the crowd before cutting the first slice into the cake celebrating the University’s 150th birthday at the Krannert Center for Performing Arts on Tuesday.

On Feb. 28, 1867, the Illinois Industrial University was granted a charter to become a public land grant University. One hundred and fifty years and almost 900,000 graduates later, the University has grown from one building with a founding class of 77 students and a handful of professors, to one of the leading research Universities in the nation.

But Chancellor Robert Jones spoke to a crowd of around 200 gathered at the Krannert Center for the Performing Arts Tuesday afternoon about the future of the University and the work that still needs to be done.

“No one would argue that higher education is in an unsettling place,” he said.

In 1867, education was hard to obtain and hard to access for most people in the Midwest or from farming families.

“Every issue we face now were faced by the founders,” Jones said. “Our founders showed us a path that was at times reactionary and at time visionary.”

The 150-year birthday party will continue for the next 15 months, ending on May 13, 2018 with the Commencement that year.

Deputy Governor Leslie Munger read a proclamation from Gov. Bruce Rauner, who was not in attendance, declaring Feb. 28 University of Illinois day. A second proclamation was given by the mayor of Champaign, Deborah Frank Feinen, and Urbana Mayor Laurel Prussing declaring Feb. 28 to May 2018 a sesquicentennial year of celebration for the University of Illinois.

Christopher Benson, associate professor in African-American studies and journalism, was the master of ceremonies and touched on the racial history of the University. He mentioned that while there are positive aspects of the University’s history, the journey to the current world-class University hasn’t been perfect.

“Illinois has had a difficult journey to this place,” he said.

Issues include the fact that the KKK was a registered student organization of the University and hosted minstrel shows with students performing in black face.

“Our University would be unrecognizable and unsettling to the first group of faculty and students,” Jones said, specifically mentioning women and people of color in the student body and faculty.

Carol Ammons, state representative for the 103rd district, said part of her job as a representative is to help the University reach its full potential as a center for academic progress.

In the state legislature, she fights for funding for higher education to help achieve this mission because she believes that the state and the students are inextricably linked and educated people are an important part of a functioning society.

Chancellor Jones said that in this time of celebration, it is important to remember that there is more work to do. Campus members should continue to study, make discoveries and even occasionally fail, all which drive the University forward and keeps it from standing still.

“(We) don’t want to see the doors closed from families because they cannot write a large enough check,” he said.

Timothy Koritz, chairman of the board of trustees, thanked everyone on behalf of the board. He said that it’s hard to imagine a time before the University of Illinois was a staple of the landscape amidst the prairie grass and that now provides “world class programs that transform students lives.”

“But this too will pass,” he said.

President Timothy Killeen said that in a world of large numbers, 150 years can sometimes get lost, but it’s still worth reflecting on, as “a tribute to excellence to enable the University to thrive through social change.”

“My message today is be of good cheer, because no matter what problems or troubles you see ahead, this University has a history of goodness,” Killeen said.

Following the ceremony was the cutting of the Illinois birthday cake by Chancellor Jones and a performance by Funkadesi.

“Let’s make the sesquicentennial a celebration for all the good work the University of Illinois will do today, tomorrow and forever,” Jones said.