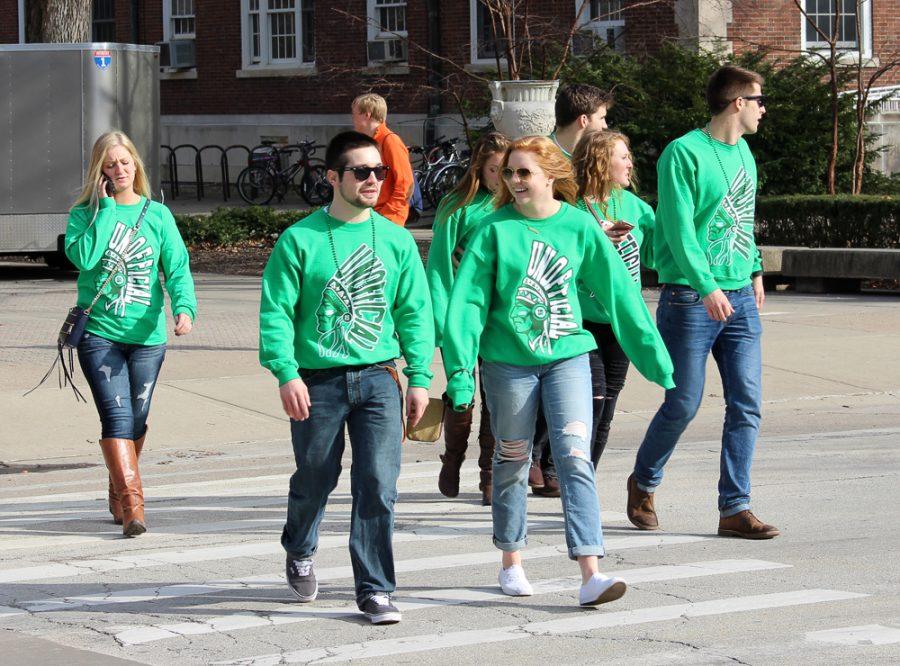 While there are many spots to pick up green tees for this weekend, only three companies are legally allowed to print the words “Unofficial” on their clothing. Unofficial is officially trademarked, with three local apparel companies having the rights to print it as they see fit.

Apparel company UpMerch filed the application for the trademark use of “Unofficial” for clothing on Oct. 19, 2015 and it was fully registered Nov. 8, 2016.

UpMerch founder and CEO Kevin Alsterda said that the “character mark,” which protects the wording of “Unofficial” itself, is registered for their apparel.

While UpMerch does own the trademark, local apparel companies Campus Sportswear and TeShurt can still print “Unofficial” clothing due to an open licensing agreement. Alsterda said he couldn’t give too many details about the agreement, but that his lawyers have been working on it for the past year.

The deal states that UpMerch will hold the trademark, but Campus Sportswear and TeShurt can still print and use the word “Unofficial” for their apparel without having to pay any royalties for it, said Campus Sportswear Owner Steven Farag.

Farag said that the use is unlimited, and that the three companies just decided to cooperatively use it.

“We all came to terms for good business,” Farag said. “We [also] kinda came up with the designs at the same time as them.”

Alsterda said that a violation of the trademark by an outside company will depend on how the term is depicted and the design on the shirt.

“That is something I’d send to my attorney and let them decide what violates the trademark and what doesn’t. It’s a complicated law, and I’m not a lawyer,” Alsterda said.

During the week of Feb. 19, sixteen University faculty senators drafted a resolution urging Chancellor Robert Jones to issue a statement to UI students about the “highly offensive and insulting” nature of Unofficial shirts with the Chief Illiniwek symbol on them.

A Massmail was issued by Chancellor Jones Feb. 23, talking about protecting free speech and issues on campus. The prior resolution draft has since then been withdrawn.

“Once again we’re seeing Unofficial t-shirts that many in our community view as insulting to Native Americans,” Jones said in the Massmail. “We can’t predict what the next issue will be but we know there will be one. These are often painful moments for our students, faculty, staff and community and we need to support one another as we strive to address divisive issues in society.”

Chairman of the General University Policy Committee Nicholas Burbules said that this Massmail will be the last public statement regarding the Unofficial shirts and the Chief.

There was a push for campus officials to discuss the issues of racial insensitivity and the changing of a mascot, but Burbules said at the senate executive committee meeting that he believes it is up to students to enact real changes.

Farag said that his Unofficial designs are not meant to offend anyone and that the design itself has been around for a long time.

“Since I was a freshman it’s been the same story every single year,” Farag said. “If there’s a demand from students that want them, then we’ll print them. We print it, it’s our No. 1 design, we print thousands of them. If they don’t want it, we won’t keep printing it anymore.”

The University owns a trademark on the Chief Illiniwek trademark and does not allow it to be used on shirts promoting Unofficial, campus spokesperson Robin Kaler said.

However, Farag said that Campus Sportswear has had no issues yet with the University’s Chief trademark, and that he has run all the designs by the University and they have approved it.

“We’ve had no issues yet with the Chief trademark the University owns, [we] simply [have] a redrawing, a silhouette. We call it the ‘Unofficial mascot’ so that we don’t offend anyone. We try to keep the word ‘Chief’ out of it,” Farag said.

The Native American and Indigenous Student Organization and the Office of Inclusion and Intercultural Relationships will supply students with a free Illini shirt if they trade in any Chief inspired apparel through March 10 at the Native American House.