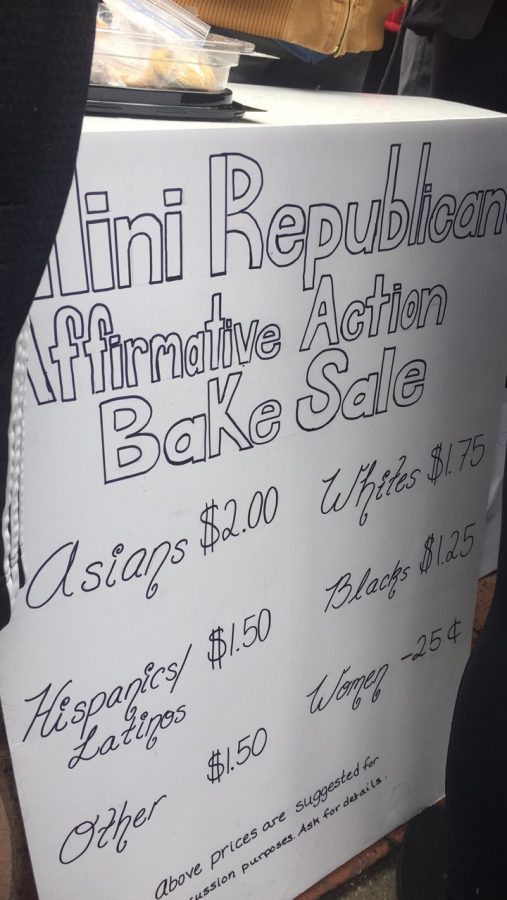 The Illini Republicans host a bake sale on the Main Quad to bring attention to affirmative action.

The Illini Republicans organized a bake sale Tuesday to bring attention to Affirmative Action, a policy they believe has negatively affected economic growth.

The group set up a stand outside of the Union on Anniversary Plaza, just north of the Quad.

The Affirmative Action Plan is meant to provide equal education opportunities for underrepresented groups, including minorities.

“Our philosophy is that admissions should be based on achievement and circumstance,” said Jason Pellettiere, junior in LAS and member of Illini Republicans. “It make sense to conduct admissions based on circumstance, as opposed to race because when based on circumstance, you are addressing the core problem, assisting those at a disadvantage gain access to educational resources, regardless of whether African-American, Latino, Caucasian or Asian.”

In response, students who felt the event was racist and insensitive organized a counter protest called “Blockade the Anti Affirmative Action Bake Sale.” Students surrounded the bake sale, making it difficult to purchase the baked goods or show support for the Illini Republican’s cause.

“The Illini Republicans believe that minority students admitted through Affirmative Action should be admitted based on factors such as socioeconomic status rather than race, but fail to realize the two are so closely connected,” said Ashley Nosike, senior in Media. “We are here to spread awareness and the anti-affirmative action blockade opens the eyes of those too scared to talk about this issue.”

Crescendo, a student group whose focus is to speak out for underrepresented students in the School of Music, also organized an “I am Not a Quota” bake sale to promote equity and inclusion at the same time and place as the Anti Affirmative Action bake sale.