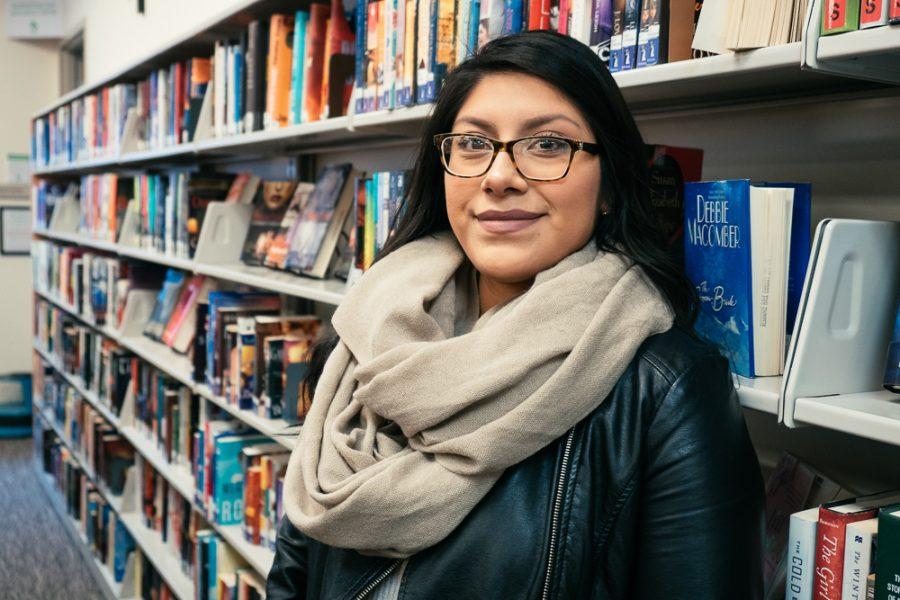 Daisy Alonso’s family did not understand her choice to begin school at the University. She is the first in her family to go away for college.

Daisy Alonso’s extended family doesn’t talk to her about her education at the University. Whenever she goes home and sees them, they are cold to her about it.

“I don’t wanna say they weren’t supportive,” she said. “But, even today, they don’t wanna hear about it.”

The sophomore in AHS experienced something common for many first-generation students: a lack of understanding or support from their families in regards to pursuing their education far from home.

Alonso’s older siblings attended community college. While Alonso’s parents wanted her to do the same, they remain supportive of her choice to attend the University.

“I said no, because I saw my brother and sisters struggle,” she said. “After, (my mom) understood, and she was supportive still.”

College students whose parents didn’t attend college can face adverse challenges when they attend school. These first-generation students are achieving a milestone by being among the first in their family to attend school, but there are some aspects of college that they don’t expect.

David Fajardo, sophomore in DGS, knows what it’s like to feel overwhelmed as a first-generation student. He had to coach himself through the college application process on his own, without his family or their personal experiences to guide him.

“I couldn’t go to my parents about my major or the process or FAFSA,” he said. “I would ask guidance counselors, and they would help. It was more about what I was doing right and wrong. Nobody was there to tell me that.”

Even after three semesters of college, Fajardo still feels impacted by his first-generation status.

“I’m still learning how to guide myself through college (by) myself,” he said. “I see other people not struggling, but I am with (college). But I guess they have other people to help them, they have some type of leverage (over) me.”

For Araceli Diaz, stepping onto a college campus for the first time as an undergraduate felt incredibly overwhelming. Diaz knows firsthand that being a first-generation college student comes with more challenges.

“My mom would have rathered that I went to a community college,” Diaz said. “When I called her, she would say I could come home, which wasn’t what I needed or wanted to hear.”

She also felt at a disadvantage, as many first-generation students do. Asking questions made her feel clueless at first, especially surrounded by a majority of second-, third- and even fourth-generation college peers.

“I didn’t know what I didn’t know,” she said. “I felt stupid for asking questions, because I didn’t have the right information going into college.”

Diaz, now the assistant director of La Casa Cultural Latina at the University, noted that first-generation college students are often minorities. In what La Casa calls a “predominately white institution,” some minority students can feel obligated to be representatives of their entire race, an intimidating task when students are already feeling vulnerable and unsure of themselves, Diaz said.

Many of these mediums, like the film “Neighbors” and the television show “Greek,” highly emphasize the social aspect of college while ignoring the academics or application process.

One thing mostly missing from the media portrayals is homesickness. Being away from home was difficult for Diaz, which surprised her. She thought she was emotionally ready to be away from home, but she was not.

“To not have hot sauce in the dining halls, to not hear Spanish in the streets, I found myself missing (home),” she said.

Diaz also has done a considerable amount of academic research surrounding the topic.

One is for students to reside in a living learning community, which houses students with similar backgrounds or common interests in clusters within University residence halls around campus.

The other is to attend a summer bridge program, which allows students to acclimate to college before school begins. Two programs on campus, Conéctate and Readying Illinois Students for Excellence (RISE), are geared for first-generation students.

Just like many other freshmen, Cynthia Huerta was excited for her first semester of college.

Despite her excitement, Huerta, now a sophomore in Social Work, was sad to leave her family and the city of Chicago. However, she participated in RISE in the summer of 2015 before her freshman year.

“I think it helped a lot,” she said. “It helped me to see the school better.”

RISE is a collaborative effort among the Office of Inclusion and Intercultural Relations to support and prepare first-generation and underrepresented students. RISE is free for students and starts in June.

La Casa hosts and funds an early move-in program, Conéctate, that is aimed at helping first-generation Latino and Latina students become better familiarized with the University.

The program is free of charge and runs on a first-come, first-served basis after registration. Students can move into their dorms early and participate in two days of activities at La Casa.

Fajardo participated in Conéctate before his freshman year.

“It was okay,” he said. “It was very based on what we had to learn for the first few days and survive throughout college.”

While finding it informative, Fajardo saw flaws in the program.

He thinks the program could have been more successful if La Casa had done a follow up with students who participated to check in and make sure that they were acclimating successfully.

“[La Casa] told us that if we needed help to come to them,” he said. “But everyone says that. They just kind of set you free.”

“I met more people there, and I haven’t gone home as much,” Huerta said.

Huerta also has an affinity for a particular Green Street establishment when she misses home.

“When I miss Mexican food, I just go to Maize,” she said.

Huerta does see positivity in being a first-generation college student.

“My parents didn’t have the opportunity to go to school, and I do,” she said. “So I think of my opportunity as motivation.”

Huerta, Alonso and Fajardo all want to pursue their master’s degrees in their respective fields.

In the end, Fajardo finds that being a first-generation student does not completely set him apart from other students on campus.

“Honestly, at some point, we all have to make decisions on our own,” he said.