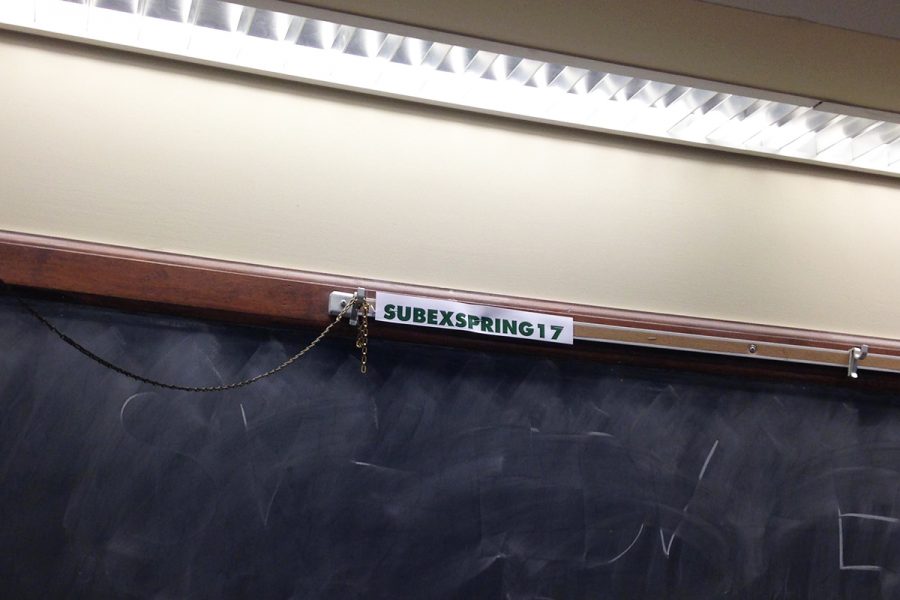 Transport company Suburban Express has recently been advertising its services around University classrooms and students are beginning to take notice. A thread was posted in the UIUC subreddit asking if these commercial advertisements are allowed in classrooms.

According to campus spokeswoman Robin Kaler, these commercial advertisements are not.

Kaler said that advertising businesses is not allowed in classrooms, and that the fliers are removed by building service workers when they are noticed. She said that the Facilities & Services department reaches out to companies posting these advertisements and informs them that they are in violation of University policy.

College of ACES student Ben Chapman said he has seen three instances of Suburban Express’ advertising in lecture halls at Gregory Hall as well as one in David Kinley Hall.

Chapman said that he’s seen them on the lecterns as well as stapled to the tops of blackboards. He said the staples can still be seen in the cork board from a removed flyer inside the second floor Gregory Hall lecture hall.

The general University Property and Facilities policy deals with the posting and distribution of handout materials. It prohibits the advertising of information associated with solicitation for profit, such as coupons, discounts and commercial advertisements.

When it comes to distribution, the policy notes that this should only be done in “common areas,” which does not include the interiors of classrooms, auditoriums or lecture halls.

Distribution of flyers and similar items are allowed inside the common areas of University educational buildings, provided that they do not disrupt “University business,” such as classes, labs or meetings.

Registered student organizations have to apply to get their flyers posted in “non-free-will” spaces in residential halls, where approval is then granted by the Office for Residential Life.

According to the Illini Union Office of Registered Organizations, only registered Illinois organizations can advertise functions or activities on campus. However, it does note that when the advertisement deals with something that is in great interest to Illinois students, small commercial notices can be posted if authorized.

Its handbook on marketing and advertising for registered student organizations also states that any organization not complying with these policies may lose their posting privileges for a period of time and that the organization may be charged the cost for the removal of posters in unauthorized locations.

Chapman said that all the ads he has seen in classrooms have been torn down.

“SubEx is seemingly trying very hard to appear to be the ‘official’ transport system of UIUC. They’re posting ads free of charge in public places,” Chapman said. “Most of them are rather harmless, and simply require a janitor or a student to pull them down, but as made clear by the stapled ad, SubEx doesn’t care about damaging property in order to get their free propaganda space.”

Kaler believes that the Facilities & Services department already has, or will reach out to Suburban Express.

The Suburban Express office was closed when calls were made for comment and did not provide a response.

Correction: A previous version of this article included a non-factual quote incorrectly identifying a cork board as wood. The quote has since been removed. The Daily Illini regrets the error.