University students compete to bring life to the moon 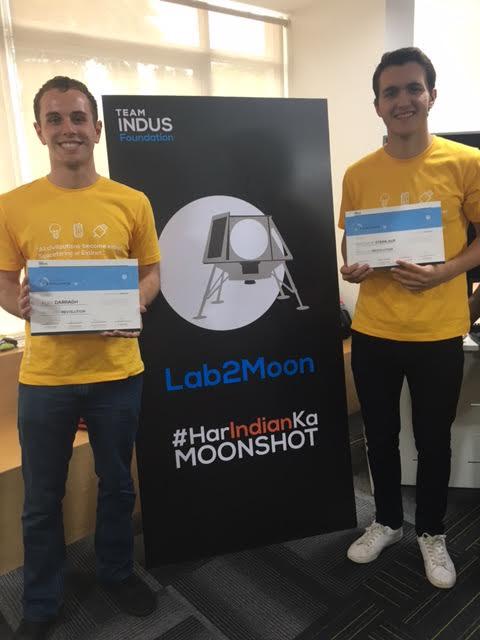 University freshman Engineering students Alex Darragh and Matt Steinlauf were one of eight teams that travelled to Bangalore, India, to compete in the Lab2Moon Challenge. They are hoping to create a sustainable lunar greenhouse on the moon.

During a recreational game of tennis, University students Alex Darragh and Matt Steinlauf, freshmen in Engineering, randomly decided to enter the Lab2Moon Challenge.

The Lab2Moon challenge is an international competition allowing youth to design and construct a project to promote sustainable life on the moon.

Darragh and Steinlauf’s team, Regolith Revolution, designed a small lunar greenhouse which they hope will allow humans to grow crops on the moon. The device is about the size of an aluminum can and is equipped with seeds, water and fertilizer.

TeamIndus, a private aerospace research organization in India, constructed the Lab2Moon Challenge as a way to find youths to work with them in the Google Lunar XPRIZE challenge.

TeamIndus is one of four teams competing to win the Google Lunar XPRIZE. They have designed a state of the art vehicle to travel through space to land on the moon’s surface near the lunar equator. They call it the Lunar Lander, and the Regolith Revolution duo are one of eight teams guaranteed a spot.

The Google Lunar XPRIZE is a worldwide competition. The competition requires a privately funded organization to successfully place a robot on the moon, travel a minimum of 500 meters and transmit high definition videos and images back to earth.

The winner is set to receive a cash prize of 20 million dollars.

Prasanta Kalita, associate dean for academic programs in the College of ACES and an agricultural and biological engineering professor, is serving as Regolith Revolution’s primary adviser and arranged a group workspace: a lab in the Agricultural and Biological Engineering building.

Kalita said that humans have exhausted their available resources and now have to design innovative technology to combat world hunger.

“The motivation behind this project is to feed the world. That’s where I see innovation,” he said. “It’s so beautiful that these two American students who have never faced hunger are thinking about the world and feeding people.”

Over 3,000 applicants submitted project ideas, and after approximately two months of deliberation, Regolith Revolution was one of 25 teams that advanced to the second round after an evaluation of their design.

After yet another round, Regolith Revolution was one of 15 teams to advance in the competition. These 15 teams were flown to Bangalore, India to present their prototype to an international jury on March 13.

“I really enjoyed our time in Bangalore because TeamIndus was really impressive,” Darragh said.

He said he was struck by the variety of intelligent engineers that were present. Members included the former chairman of the Indian Space Research Organization, Dr. K Kasturirangan, and Dr. Alain Bensoussan, former Chairman of the European Space Agency council.

Then Regolith Revolution was officially offered a spot on TeamIndus’ Lunar Lander, the only U.S. team selected.

To finalize their spot, Regolith Revolution must find a sponsor to cover a $750,000 fee by April 15.

“The real concern right now is not a technical issue, it’s finding a sponsor to cover the $750,000 required to finalize our spot on the Lunar Lander,” Steinlauf said.