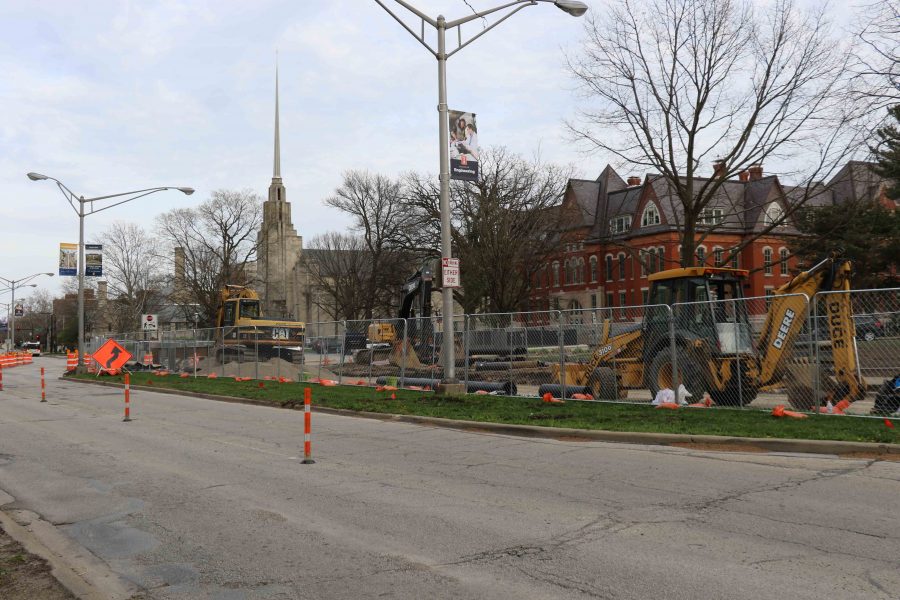 MCORE renovations occur in front of the Illini Union and portions of Green Street, which is part of a five-part plan to renovate campus streets. The project was halted beginning July as the state of Illinois was unable to pass a budget to fund the construction.

In an area of heavy traffic, construction involving parts of Green Street and the Illini Union are set to be part of a long-term project to help advance the Champaign-Urbana community.

The Multimodal Corridor Enhancement Project is a five-stage project aiming to address areas of conflict between modes of transportation, enhance transit corridors and improve overall infrastructure around Champaign-Urbana.

Project 1, which involves a section of Green Street between Wright Street and Busey Avenue, includes the addition of protected bicycle lanes, a transit boarding island and a re-landscaping of the north face of the Union.

“(A point of focus) was the bus access in front of the Illini Union,” Braghini said. “We have a lot of pedestrians, a lot of vehicles and then we have buses thrown in there.”

Often regarded as the center of campus, the Illini Union and the surrounding areas see heavy amounts of traffic from all modes of transportation.

“Whenever our vehicles are interacting, not only with cars but with pedestrians and bicyclists, of course, there are safety concerns,” said Karl Gnadt, managing director at MTD. “There are a lot of interaction points (between modes of transportation) along Wright Street and Green Street in particular.”

Currently, the two-way bicycle lane along Green Street, east of Wright Street, lies in front of the Green and Matthews northeast bus stop.

As a result, the lane is often obstructed by transit users boarding or leaving buses.

The addition of protected bicycle lanes will serve to ease the flow of bicycle traffic and decrease the interaction between bicyclists, pedestrians and other vehicles, said Illini Union Board President Alonzo Marsh.

Marsh said that the protected bicycle lanes will not simply be painted onto the road.

“The new lanes will be raised from the sidewalk,” he said. “This makes driver action more predictable by having a raised bike lane because people are less likely to roll into that bike path.”

The section of Green Street involved will also be reduced to one lane in either direction to decrease the flow of traffic.

Additionally, the north entrance of the Illini Union will be redesigned, complete with updates to the entrance aesthetics and a re-landscaped circle drive.

“(The redesign) is going to provide a lot more of a cozy environment that students are actually able to hang out in,” Marsh said.

A section of Green Street between Wright and Matthews Streets are currently closed off for reworking of the water main to accommodate for further construction.

The north entrance of the Illini Union, however, will remain open until the end of the school year.

“They’re expecting to have everything reopened either in August, September or October,” Marsh said. “The landscaping they’re hoping to have done around February (2018).”

In addition to the renovations outside of the Illini Union, other MCORE projects will focus on bridging a connection between campus, the downtown areas of Champaign and Urbana and the area’s major points of interest.

“We’ll have additional bike lanes and improved pedestrian corridors to help connect (Campustown) to the downtown infrastructure,” Braghini said. “(The projects) allow for better pedestrian and bicycle traffic from the campus town area to downtown.”

Construction for Project 4, which includes Armory Avenue and Wright Street, and Project 5, Green Street from Busey Avenue to Race Street, is scheduled to be completed by December 2019.