Habitat for Humanity of Champaign to build 100th house 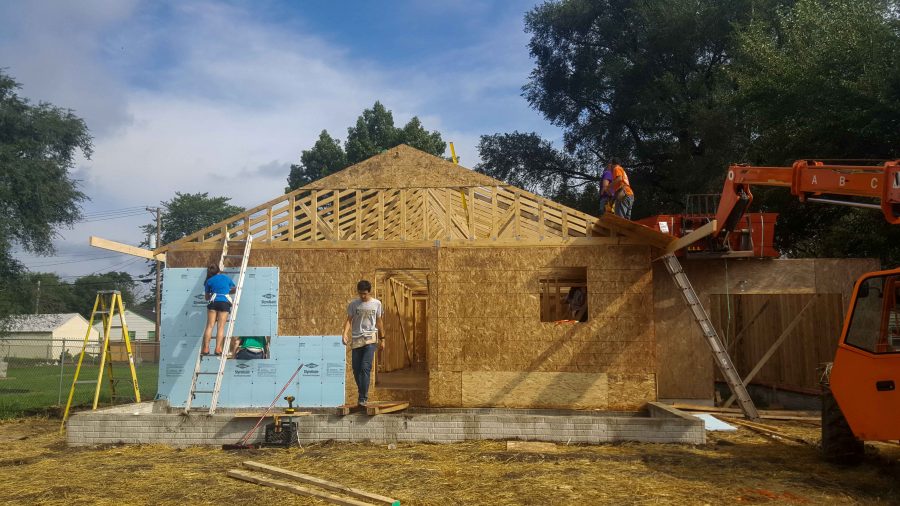 The UIUC Habitat for Humanity chapter and volunteers work on the blitz build of 506 Columbia on April 12, 2017.

Habitat for Humanity of Champaign County is going to build their 100th house in the local community.

A new house project located on 1408 W. Hill St. has already started initial construction, and the walls of the house are planned to be raised on May 1.

Habitat for Humanity is an international organization that aims to provide decent and affordable housing for low-income families.

The local chapter has  been building houses since 1991, according to Habitat for Humanity’s website.

In March, the Urbana City Council approved a resolution certifying Habitat for Humanity “as a Community Housing Development Organization.” According to the resolution, “the proposed funding will allocate $96,180.90 to assist Habitat in creating three new single-family units.”

“(In) the first twenty years we built 60 houses. (In) the last five years we have built 40. Our construction production has really increased due to (donations and the resolution),” said Sheila Dodd, Executive Director of the Habitat for Humanity for Champaign County.

The 100th house will be a part of the Women Build Project, the Habitat’s annual week-long event for women who want to learn construction skills and build homes.

“We will have women working there on May 5 and May 6 on the home. So it is kind of a two-part project,” Dodd said.

Besides this house on Hill Street, Habitat also has seven other projects currently under construction.

In order to live in a house built by the Habitat, a family needs to first apply for assistance. The officers from the Habitat then determine whether the family satisfies their qualifications.

“We check their credit, and approve them based on three criteria: their willingness to partner, their ability to pay the mortgage and their need,” Dodd said. “We look at where they currently live, sometimes that’s (a) rental house or (it) may have mold and their children are allergic.”

After being approved, the families are shown the available projects and then select where they would like to live.

“The houses are designed to be simple, decent and affordable,” Dodd said. “It brings a lot of community stability when you put permanent affordable housing in a community.”