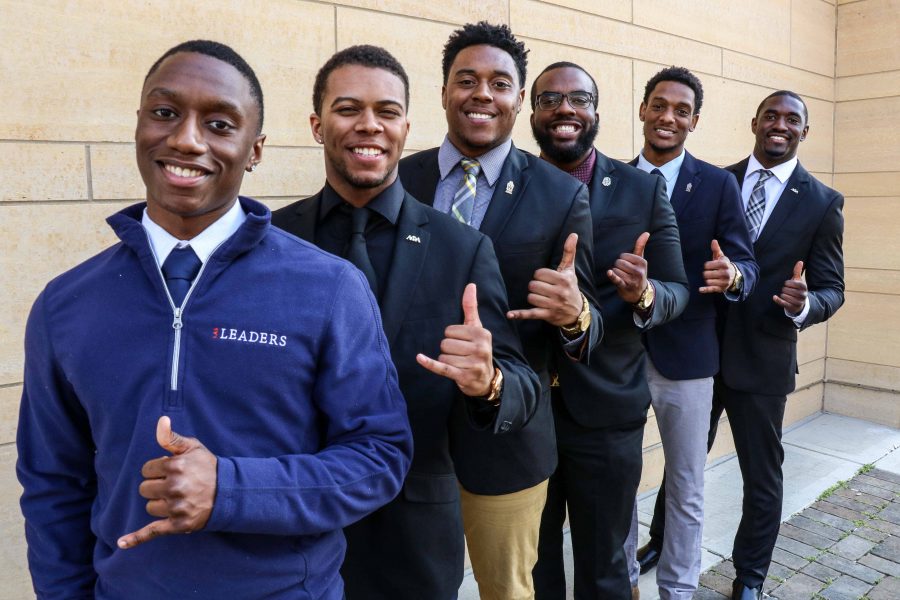 Alpha Phi Alpha fraternity poses in front of the BIF on April 10.

On March 23, after 100 consecutive years of service to the University without suspension, the Tau Chapter of Alpha Phi Alpha Fraternity, Inc., celebrated its centennial.

“It is very humbling to have … an opportunity to serve this campus for 100 consecutive years,” said Immanuel Campbell, president of the Tau chapter and senior in ACES. “We take pride in upholding our standards as a fraternity, as well as the University.”

Alpha Phi Alpha Fraternity, Inc., was established in 1906 at Cornell University with the aim to carry out “principles of scholarship, fellowship, good character, and the uplifting of humanity,” according to its website.

As part of their centennial celebration, the Tau Chapter Scholarship Committee initiated an endowment fund with the University and set a goal to raise $100,000.  For every $25,000 they raise, they will give a $1000 scholarship to a currently enrolled University student.

“It’s amazing the amount of support we have from our alumni,” Campbell said.

The Tau Chapter ended up exceeding their limit by raising $140,000 at the Centennial Gala for the University Endowment Fund, which helped bring their total to $205,000.

Campbell said they were challenged when alumnus Shayne Evans told the fraternity members to “dig a bit deeper into their pockets.”

Jordan Coleman, vice president of the Tau chapter and senior in LAS, said the fraternity uplifts the black community through positive influence.

“Although college is fun and we are the top-five party school, those aren’t necessarily positive influences,” Coleman said. “At Alpha Phi Alpha we try to incorporate professionalism, events and getting involved on campus­—the cool things.”

The fraternity’s aims are manly deeds, scholarships and love for all mankind, and the Tau chapter incorporated all three aspects for its centennial celebration.

Alpha Phi Alpha has reached out to the Champaign-Urbana community by volunteering at the Boys and Girls Club and mentorship programs in the area. Members also raise awareness about issues that affect the black community, Coleman said.

The service project that led up to their centennial weekend was building a house for Habitat for Humanity.

“Every Saturday we have been building a house in Urbana that will be populated when we are finished,” Coleman said. “We have also been in touch with the Boys and Girls program (to) do weekly programs about professionalism.”

“I don’t want us only to be remembered as someone (future Alphas) can rely on, but also someone they can look to for direction,” Campbell said. “We are in the forefront of the black community at large and I want to make sure that continues throughout the Tau chapter and the fraternity in general.”

Editor’s note: A previous version of this story said that the last quote was attributed to Jordan Coleman, not Immanuel Campbell. We acknowledge and regret this error.