Champaign takes on March for Science 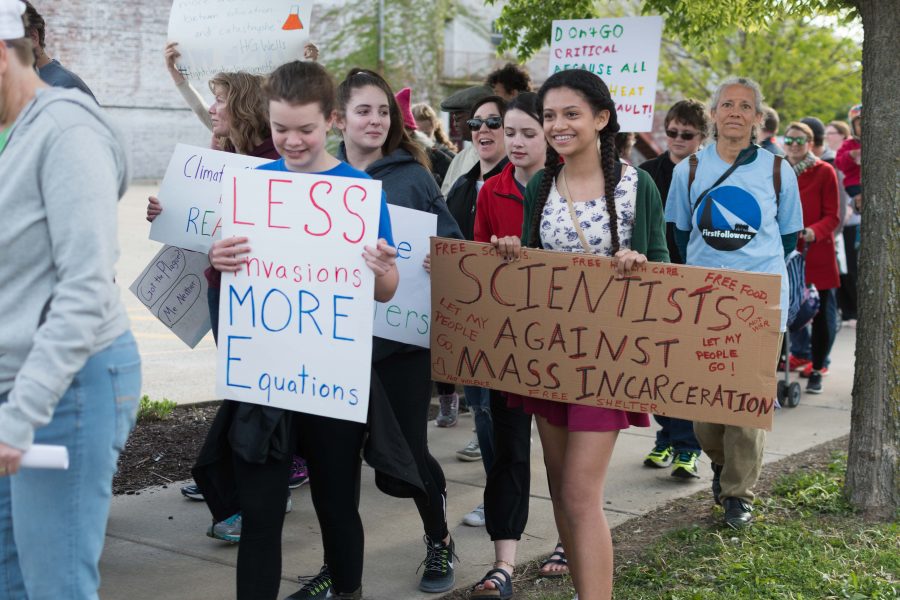 Champaign-Urbana community members march in downtown Champaign near the Orpheum Children’s Museum as part of the March for Science. During Saturday’s event, protestors campaigned for the U.S. Government to keep funding science programs and discouraged budget cuts.

Over 5,000 people from the Champaign-Urbana community gathered for the March for Science Saturday afternoon, according to Elizabeth Sotiropoulos, the lead organizer of the march.

Starting at 5 p.m. at the Orpheum Children’s Science Museum, participants marched around downtown Champaign before circling back to the museum to listen to speakers.

“We knew it was going to be great, and it was even better than we expected. We had a lot of people come and we had a lot of kids come, which is very important,” Sotiropoulos said.

Sotiropoulos said that the organizers wanted to involve kids in science and demonstrate its importance from a very young age.

“(The idea of having children involved) came from one of our organizers, Sam,” Sotiropoulos said. “At the very beginning, we said we want to change science, but where does that come from? How do we get more people involved in science? And Sam said it starts from school.”

During the preparation stage, the team had encountered some difficulties as some members of the community were hesitant to participate. However, the march turned out to be a huge success, said Sotiropoulos.

“A lot of people were very concerned because (the) Women’s March faced some criticism, and so as we were planning, we were very careful to avoid those mistakes,” she said. “Some people we talked to today, who were skeptical about the march, said this was a really great event. We really overcame those obstacles.”

The whole event started with the kick-off speech given by May Berenbaum, professor and head of the Department of Entomology, and Saba Tesfaye-Manetti, a high school student.

“Science is a way of learning about (the) world. It’s an economic engine, keeps us safe and secure, and provides technology that makes life livable,” Berenbaum said. “The important point to make is that science doesn’t have political parties and agendas other than to advance knowledge.”

According to March for Science, there were 400 different Marches for Science happening across 37 different countries around the world on Saturday, and the organizers of the Champaign march wanted to make theirs unique.

“We all planned our marches separately from the main March for Science,” said Sotiropoulos. “For the most part (the ideas were) our own, because we want to reflect Champaign and our own community.”

Following the march, five speakers shared their personal stories on how science changed their lives.

“To me, science means more than just facts, more than memorizing the periodic table,” said Amy Betzelberger, a plant biologist. “Science is really scientific thinking. It’s an approach to understand, to explore the world, and then have the capacity to change the world by asking questions, using logical reasoning, problem solving and collaboration.”